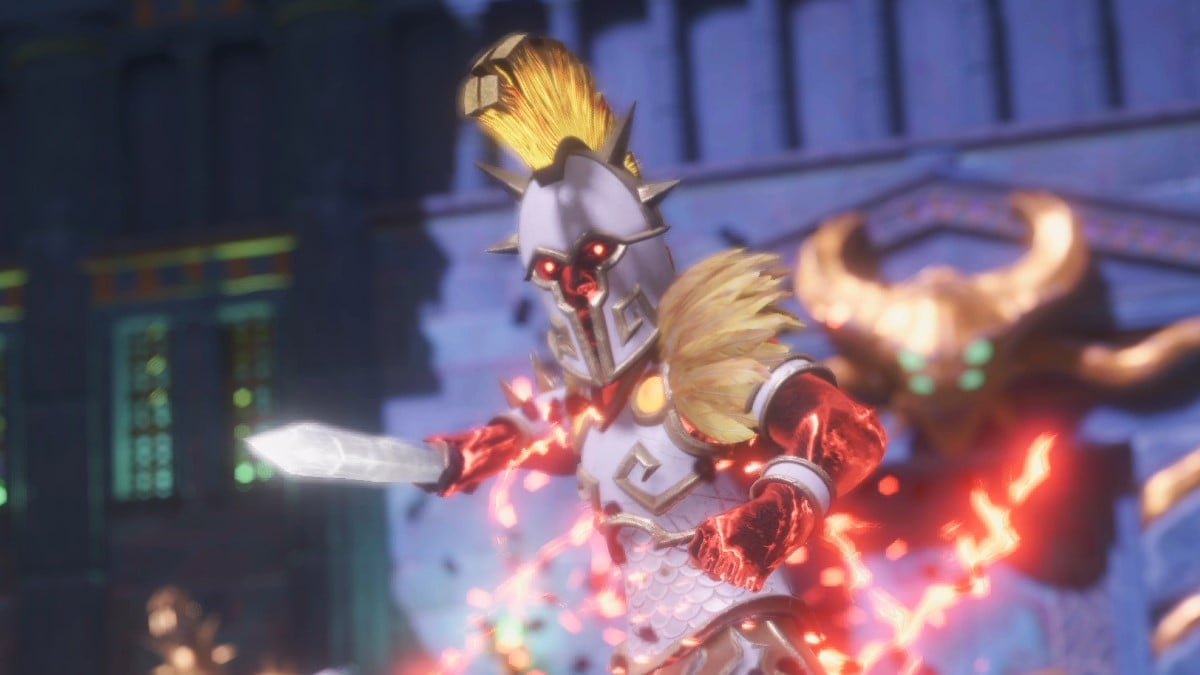 If you want Achilles to stop invading your game and sticking his sword in your ribs, you will need to finish the “A Real Heel” quest. This can be accessed any time after Achilles invades you, and will have its own icon on the map.

You’ll need to get through a brief, but very interesting Tartaros Vault to be able to fight him. This has two distinct sections, and are like races against time. You will need to pull a lever to cause a ball of stone to appear. This will then get pushed along by vents of air. You will need to jump over some obstacles to intercept the ball and stop it from rolling over a ledge and guide it into a divot in the ground. It will just take a bit of trial and error to do each one and is not that taxing.

When you reach the large gates before the Achilles fight, be sure to heal up first. Then use the lever to open the gates and go inside. Achilles is fast, this is really the defining aspect of this boss. Yes, he hits hard, but the speed of his attacks is what really sets him apart.

His main attack is a three part combo , and you should keep in mind that Achilles will twist on the stop to follow your dodges. You either need to time your dodges incredibly well, or rely on parries. None of the attacks in this combo are red charges, so you can parry them all.

He has two different attacks where he will make a small jump into the air. One is a red charge, so you need to dodge. He will lash out with his sword when he does this. The other attack causes a magic missile to erupt from the sword, and while it can be parried, you are better off just dodging anytime you see him jump so he doesn’t catch you out. Because both attacks start the same way and have very similar animations, it’s hard to tell what he is doing until the last second.

Achilles also has one final combo you really need to be aware of. He will dash forward and do his thrusting attack, causing a magic missile to appear, and he will then do two brief slashes, causing two more magic missiles to dart at you. These have very strong tracking, so are difficult to dodge, and you may need to parry them to be safe.

Finally, Achilles can mix things up a lot, doing a three part combo that can start, or end, with a red charge. You will need to pay close attention to his sword, which is what will telegraph the move, as his body is a bright red color at all times.

For your own attacks, Achilles is a fight where you really want to stack Stun on him. Strong attacks from your Axe may not do huge damage, but they build up stun fast. Athena’s Dash is a great ability for this fight as it allows you rapidly close distance, then do good damage and stun to him. Ares’s Wrath is a solid option also. It won’t crowd control Achilles as it will smaller mobs, but it will add 408 stun, which is huge.

The Axe Smash skill is also a great option. You can use it when Achilles is doing his little dance move, showing off, and it will add another 210 stun. Just make sure you dodge out fast, as Achilles normally follows up that little dance with a charged move that you cannot parry.

The interesting thing about this fight is Achilles will give you a surprising amount of space if you dodge backward a few times, giving you plenty of time to heal. This is actually quite fun, as you get the impression that he enjoys the time to show off.

This means you can take your time to learn his combos, heal up when you need to, and get his timing down to eventually defeat him.