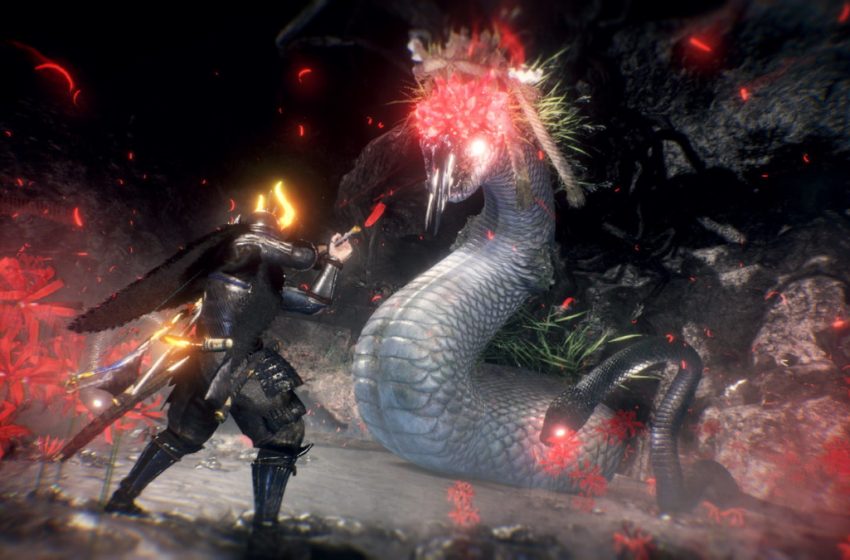 The third boss in Nioh 2 is a big snaked naked Yatsu-no-kami, and it’s no pushover. You want to take your time with this boss because it has a large sword-like horn attached to its face and two serpent heads that act like arms on either side of its body. Once you understand Yatsu’s patterns, you should have no problem taking him down.

When the fight begins the snake will dive straight at you, forcing you to dodge to the left or right. The direction doesn’t matter as long as you dodge. Immediately after that, you can dive straight into it to deal some damage, but you want to back away from there and wait for it to attack. Yatsu-no-Kami works a little bit differently than the other boss fights, where you want to wait for it to attack to line-up the correct counterattack. It won’t give you too many opportunities to use your burst counter on it.

For example, when it places the two serpent heads on the ground they will come up underneath you, so you want to rush straight at Yatsu-no-Kami during this time so when the attack finishes, you’re next to it and you can deal some quick damage. After that, roll away and wait for another opening. Be careful to watch out when it spits poison at you as these pools stay on the field for several seconds, and you want to avoid these along with the pools of poison that scattered throughout the battlefield.

Yatsu-no-Kami has the snakeheads attack and continues to dive across the arena to attack you every so often. You can counter this, but it’s pretty quick, and infrequent. You want to avoid attacking it straight on to prevent being caught by this attack, so come at it from an angle. Additionally, it will summon a series of translucent projectiles that go across the battlefield. If you can see when Yatsu summons them, these attacks are easy to dodge. It uses the projectile attack in the normal and dark realm.

When it enters the dark realm, the snakeheads release from its sides and become different serpents that shoot poison at you. These two move freely of Yatsu, so you want to keep your eyes on them. Defeating them is your priority to ensure you don’t have additional enemies attacking you while focusing on Yatsu. If you avoid Yatsu, you should be fine, but it will attempt to grab you and deal a good chunk of damage along with tail strikes. The grab looks like Yatsu is attempting to coil around you, reaching back before it lunges forward at you.

Yatsu will continue to follow the pattern of these attacks during your encounter. Once you’re closer to the end of the fight and Yatsu has less health, you want to focus on attacking it in the dark realm rather than the smaller snakes. There’s a lot of repeating yourself during this boss fight with not too many special mechanics to think about. You certainly want to bring antidote with you though, to combat any of the poison you can receive from the smaller snakes.