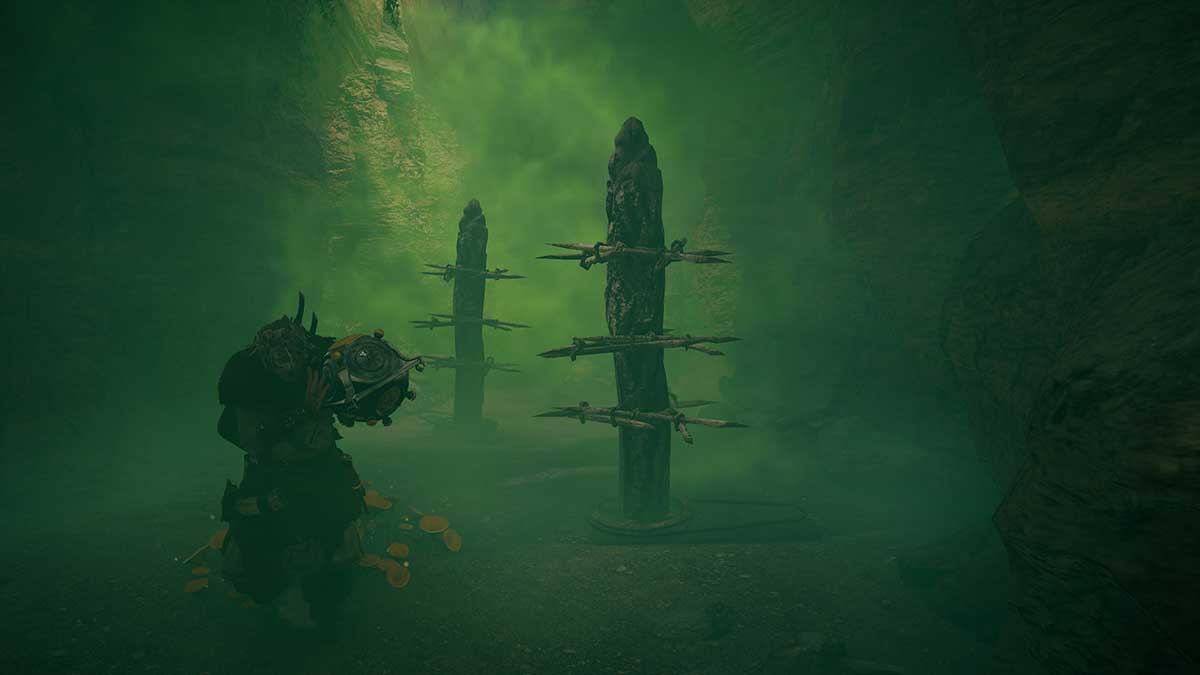 Boudicca Tomb is one of the Tombs of the Fallen that Eivor must complete in Assassin’s Creed Valhalla. It’s filled will poisonous gas, traps, puzzles, and loot. In this guide, we’ll explain how to complete the Boudicca Tomb so you can claim the hidden treasures within.

Where is Boudicca Tomb?

You’ll find Boudicca Tomb in East Anglia. It’s northeast of Brisleah Farm near a pointed rock. Use Synin to track the blue cone that appears around it in the Raven’s vision. You’ll need to interact with the Odin Rune on the rocks to open the Tomb and start exploring. See below for a map reference for the Tomb.

You’ll start to see traps as soon as you enter the Tomb. Once you get to the main chamber, the poisonous gas will also start to rear its head, meaning you need to be careful about where you tread.

The first puzzle is easy. Look to your left, and you’ll see a wooden wall. Break through to find a podium that you can drag to the pressure plate on the same side.

Move forward and take the path to your left. There’s a wooden wall on the next level up that you can break through. Head down the spiky corridor and across the zip wire until you can pick up a sphere. The real challenge comes from the area you run into next. There’s an open area with spike spears along a path. You need to get through a gap in the wall, but you can’t climb up there once you’ve thrown the sphere through. To do this, drag the rock in a wooden brace around to the hole in the wall so that you can hop through and onto the other podium on the opposite side.

Now, drag the rock in a wooden brace on this side over to the high hole in the wall that’s the only way out. Use the lower edge on the ground that rises up to get on top and throw the sphere through. Then climb up and go through yourself. The path on the opposite side leads back to the main chamber, where you can place the sphere. Don’t go back across the zip wire. We did this in our playthrough, and it soft-locked the game because the puzzles in the Tomb don’t reset. If this happens to you, load an autosave from earlier in the Tomb, and you should be able to continue.

Step 4: The hole in the wall

The final puzzle is on the opposite side of the room. There’s a hole in the wall that you need to run through so that you can pick up the second sphere. There’s nothing complex about this section of the Tomb, just run through with the sphere until you reach the point where two large wooden boxes are hanging by a rope.

You need to jump onto the box furthest away from you so that it sinks and allows you to pass under the barrier. Once you’re through, make your way to the plate and place the sphere to open the door in this chamber. To get across the gap and into the Tomb, you need to throw all the rocks off of the wooden platform so that it rises and allows you to jump across.

Inside the Tomb, you’ll meet Boudicca. She’ll tell you about her conquests and why she was so important. Once she’s finished, you can pick up the Fallen Hero Cape and Fallen Hero Greaves from the two chests in the same room.