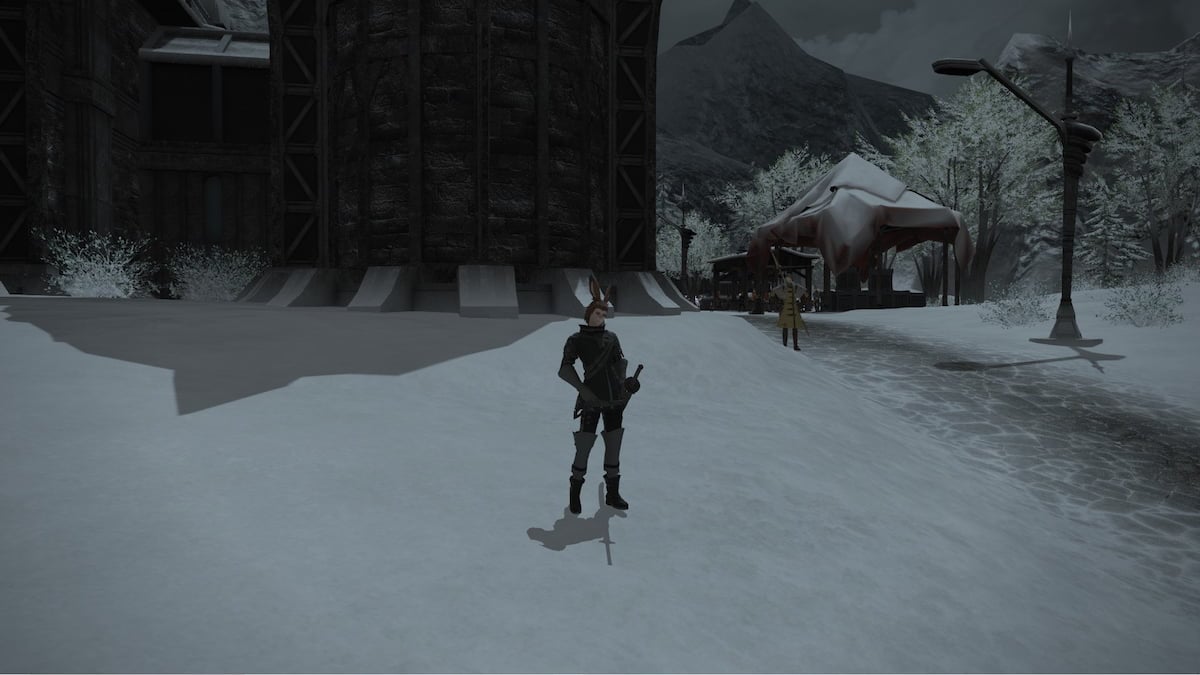 The In From the Cold quest will have you roleplaying as an Unknown Imperial in Final Fantasy XIV. During this sequence, you’ll have to battle and sneak your way through Regio Urbanissima, attempting to survive and make your way to Camp Broken Glass. In this guide, we’re going to outline what you need to do and where you need to go to complete In From the Cold in Final Fantasy XIV.

Before roleplaying as an Unknown Imperial, a cutscene will play out. After you reach this point, you’ll become an Unknown Imperial. You will have three abilities and skills that you can use while in this form. The first is your only attack combo every time you use it, so you’ll primarily use it when fighting creatures. The second ability is an attack boost, giving you the chance to do 25 percent more damage for a brief time. Finally, the third ability is damage reduction, enabling it, so you take 10 percent less damage while it’s activated. You will not passively heal while in this form.

From the left of your position will be a Tempered Imperial that you will need to defeat. Upon defeating them, loot their body, and you’ll gain the ability to heal yourself. You’ll need to search Deceased Imperials, small sacks, and Wrecked Magitek Reapers if you want to find additional healing charges. After defeating the Tempered Imperial, the area will open up for you, and your goal will be to reach an Immobilized Magitek Reaper. You can find it closer to the southwest of your starting location.

Once you’ve interacted with the Immobilized Magiteck, your next goal is to find the key and fuel to power it. You can find the key on a wounded Imperial not too far away from this location.

The fuel is a bit further away. You’ll need to travel to the northwest of your current position through several enemies before finding a broken Magiteck Reaper with some fuel. After interacting with the Magitek Reaper, you’ll have to carry fuel back to the location of the Immobilized Magiteck Armor, avoiding enemies along the way. If an enemy hits you, you’ll drop the fuel cell, but you don’t need to return to where you found the fuel. Instead, you’ll have to pick it up back up off the ground.

With the key and the fuel given to the Magiteck Reaper, you can now use it to attack various enemies, preventing you from leaving and heading to Camp Broken Glass. You’ll have three attacks. The first is a small AoE ability that you can use the most often, and you’ll frequently be using to defeat your foes. The second is a much larger AoE that has a longer cooldown, so you want to use this to make sure that you clear the enemies surrounding you. The final attack is a line AoE that you’ll shoot at the target you’re highlighting.

After you defeat the foes, the Magiteck Reaper will not be able to move, and you’ll have to continue on foot to the next area, past a few Tempered Imperials. You’ll encounter armed civilians that you’ll need to help, and you can work together with them to escape.

In the following sequence, you’ll be working with the citizens to fight back the Tempered Imperials and the other enemy forces. Eventually, there will be a significant AoE attack that forces everyone to enter the center, nearly killing your character. You’ll then have a Real-Time Reaction sequence to regain consciousness, and when you do, you’ll then have to crawl forward as close as you towards Camp Broken Glass. However, at a certain point, you’ll stop, and a cutscene will play out, and you’ll return to your body to turn in the Main Scenario Quest In From the Cold.