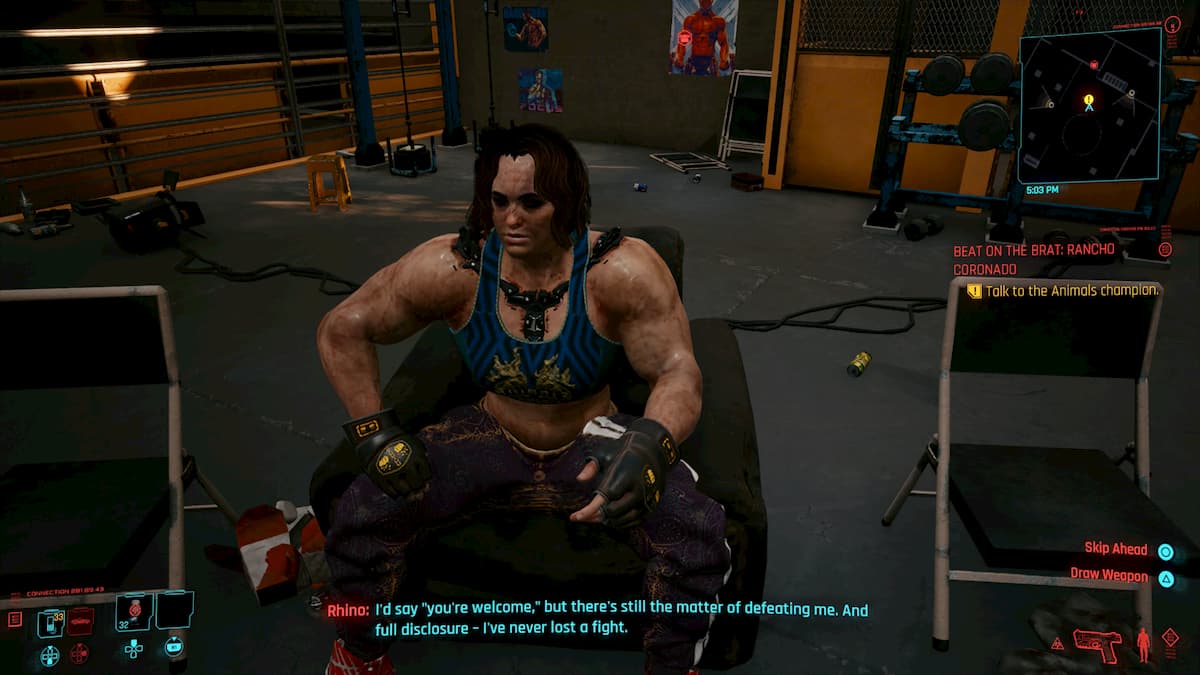 In Cyberpunk 2077, the Beat on the Brat series of side gigs seems to be one of the most difficult in the entire game. In Rancho Coronado, that remains true, but there are a few tricks to beat the one baddie that’s in your way from completing the mission.

After chasing the mission waypoint, you’ll be brought to a large red building that will have a boxing gym inside. Unfortunately, the only way to get in is by taking the main entrance and paying the guard 3,800 eurodollars. If you do not have the cash, everyone in the gym will come out and try to kill you.

Considering that there’s about 10 enemy NPCs, and a boss inside, we recommend that you return to the mission after you scrounge up the money. Although it is extremely difficult, eliminating each NPC, including Rhino, will complete the mission.

Once you’ve paid the guard and are inside, head to the left to begin your boss fight with Rhino. Before you agree to start the fight, you will need to make sure that you have the proper perks. As guns aren’t allowed, melee damage will obviously play a major role and you’ll certainly need to boost it, if you haven’t already done so, to win the match.

You’ll primarily want to focus in on the Body’s Street Brawler skill tree. Inside this, make sure you’ve at least unlocked level 1 of the following perks: Crushing Blow, Flurry, Rush, and Dazed. With these, your punches will do at least 50% more damage and add a 15% chance to stun Rhino.

During the fight, Rhino’s primary move is to charge straight into you and lay as many punches as possible until you die – an utterly brutal sight to see. To avoid this, get behind Rhino before their first punch and then attack them, even after she is stunned. Continue this process about four or five times and Rhino will be defeated.

After, there will be no bad blood and you can walk out of the gym without a scratch. If you do fail the fight, luckily, she will not kill you and make you respawn. Instead, you will be able to get back up and ask for a rematch.