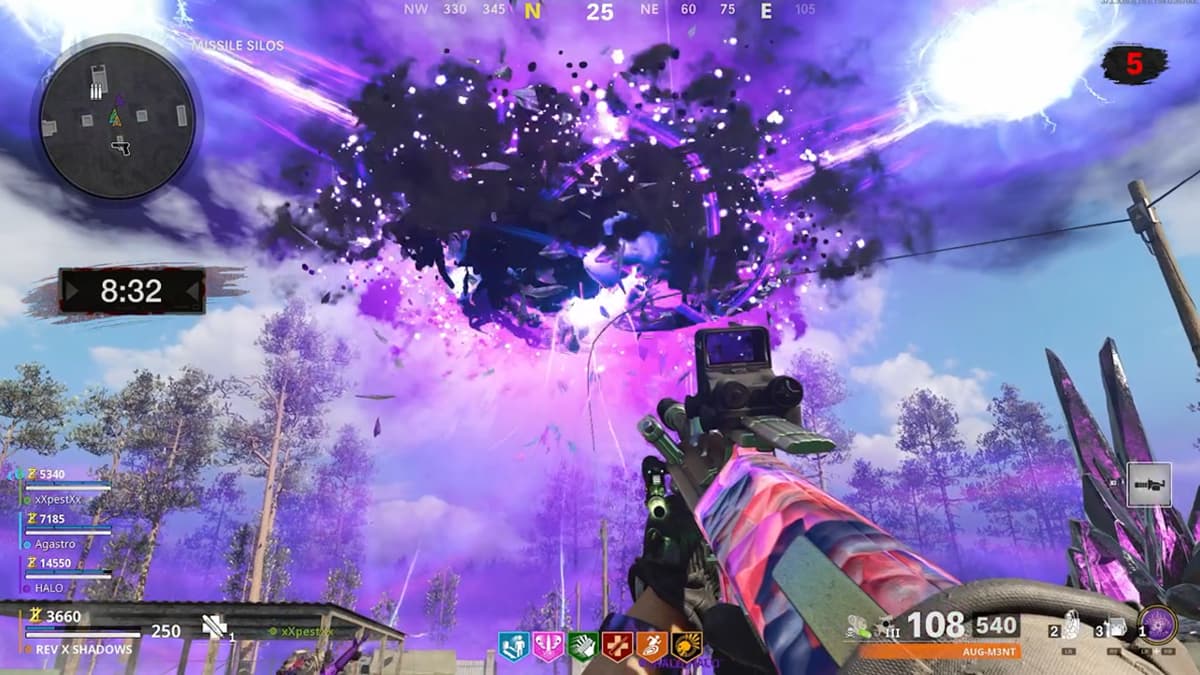 Before you begin the steps

Before you can begin to do any of the steps for the Easter egg, you first need to reach round three. As you work up to that, make sure you complete all side quests and find the small objectives on the side (like fishing) to get as many perks and upgraded weapons as possible. Also, be sure to try and get some monkey bombs if you get the chance, and everyone on the team should have at least one weapon with the Brain Rot ammo mod on. Use whatever Field Upgrade you are most comfortable with, but Ring of Fire and Frenzied Guard are the most useful in the final fight if upgraded. Finally, it is also recommended to have a Death Machine or Chopper Gunner during the final boss fight.

As for your weapon selection, we recommend having one shotgun and one medium to long-range gun. This can be an LMG, tactical rifle, or assault rifle. You will need the medium to long-range weapon for the final boss, so be sure to upgrade it as much as possible, even if you prefer using the shotgun.

When you reach round three, there will be a radio box that spawns in the level. There is one location in every section that the radio will be at, but it will not be marked on your map. If you have subtitles turned on, you will get a notification letting you know you are close and making it easier to tune the frequencies. It should be noted that there is a similar side objective, but this radio is always in the same location and does not reward you with a song.

Here are the locations on each map.

When you find the radio, it will be giving out a static sound that your subtitles will lead you on. Interact with it, and a bunch of zombies will spawn. You need to kill all enemies in the area and the radio will begin putting out a new static noise. Be sure to pay attention to your subtitles because they will give you a number you need to remember.

Not too far away from this radio will be three tuners that you need to go to and interact with. Each time you press one, it will begin cycling through the various static noises. You need to set all three tuners to the same number as the radio. While you are cycling, the tuner may turn on a red light and set off an alarm where more zombies will spawn. Focus on killing all of them, and you can get back to changing the frequencies.

When all three tuners give out the same static noise, go back to the radio and interact with it. A bunch of Essence and an item called the Beacon Listening Device will drop out. Pick up everything and listen to Samantha, who is now communicating to you through the radio.

Now that that is done, complete the main objective in this round and go to the beacon when ready. Interact with it, and you will have a new phone icon that will let you communicate with Samantha and then warp to the next round.

In round four, you will be looking for a small monkey toy with an “M” marked next to it. When found, shoot it, and an item called Microfilm Slides will drop for you to pick up. There are four locations where you can find the monkey toy on each map.

Here are the spots.

Taking the slides to a projector

When you find the Microfilm Slides, you need to take them to a specific projector on that map (except Ruka, which does not have one). As you interact with the projector, Samantha will describe the backstory of what is happening. Keep advancing through the slides until she says you need to travel to Ruka. Go to the beacon after completing the main objective, and you will automatically be transported to Ruka.

Here are the projector locations.

Now that you are back in Ruka, you cannot do any more main objectives. You can still do side content, and you have some free time to explore and find more gear if you need it. Be sure to make the most of it because this next step is the point of no return. Every moment from here on forward will have endlessly spawning zombies, so be ready for a fight. When ready, go to the Missile Silos and enter the small building with the elevator that up to this point had no purpose in the map.

At the bottom of the elevator, head out and to the left and you will be in what we will call Missile Area D. Take the staircase to the right up and head through the nearby hallway to come to a console area.

From the console room, go into Missile Area A and go downstairs. There is a line of computers here with one giving you the option to “Lift the Lockdown.” Interact with it for a cutscene to play.

Once out of the cutscene, make your way back to that console room we were in before. Be careful; since our last time here, tons of disguised Mimics have decided to move in. We recommend running through the room to get them out of their disguise and leading them outside so you can pick them off. Another good way to handle this would be slowly killing them one by one, but you will be there for a while, and don’t forget you will have zombies coming in behind you.

When the Mimics have been taken care of, go back to the console room and look for the hallway leading to what would be Missile Area C (it is the only hallway with a closed door at the end). In front of the door is a body with an ICBM Launch Key that you can grab. The moment you interact with it, a red Mimic will spawn. This red Mimic is essentially a super version of the typical Mimic you see, so work with your teammates to bring it down. When it is dead, it will drop the first key.

Next, make your way to Missile Area B. On the ground floor between two consoles is a red box that looks pretty similar to the boxes you use in the Retrieve main objective of Outbreak. Interact with it, and a canister will rise out of it.

Once the canister is filled, kill all enemies that spawn in. When done, wait a bit and you should be able to pick up the canister, which will change the Field Upgrade of whoever is holding it. Take it to the bottom of Missile Area D.

When in Missile Area D, you should notice a big Dark Aether jellyfish floating in the bottom portion of the room. Take the staircase next to it so you are standing level with it on some Dark Aether grass. While staring at the jellyfish, activate your Field Upgrade and you will begin floating towards the creature. Eventually, you will go into the jellyfish and can find the second key. If you do not see it, just hold down the interact button and you will grab it. You will know you have it if you drop the canister inside the jellyfish.

For the final key, go to the bottom of Missile Area A and find a small hallway that has a dead end. There is an Essence Trap like the ones used in Firebase Z here, but it has a banana duct-taped to it.

With the Essence Trap in your inventory, look for a vent somewhere in Missile Area A that has a ghostly blue glow coming from it. That is a monkey that we need to catch. If you get too close to the monkey, it disappears, so instead, walk up to the vent and throw your Essence Trap near it.

If you don’t get the monkey trapped, don’t worry. You can grab the Essence Trap again and just need to find a new vent with the blue glow.

Now it is time to begin the missile launch sequence. There is a console you need to interact with in all three missile areas to start the process, but in a particular order. When you interact with one, you will hear an audio confirmation if that is the right one or not. When right, you have 30 seconds to activate the launch on both of the other consoles as well. Unfortunately, the order you need to interact with them in is random every time, so work with your teammates to continuously start the launch until it goes through. If you do it in the wrong order, you need to survive for a minute before you can attempt the process again.

When the launch order is put in correctly, be sure to hit the Pack-a-Punch machine or other areas to make sure you are fully kitted. The next part is the boss fight, and you will want to be ready. Go to the console room, and you should find some stairs that lead to a doorway back outside.

When you get outside, you will notice you have a nine-minute time limit to beat this boss. Don’t let that get you in a rush. That is plenty of time; just focus on surviving and taking down the boss.

Legion is essentially a giant Tempest that can only be harmed in a particular way. As it is floating around, be sure you are moving as well because zombies are still going to be spawning and attacking you nonstop. Train the zombies and aim all your fire at the sparking area on Legion’s chest.

When you have done enough damage, Legion will drop down on a knee. If you have Monkey Bombs, throw one out to distract the zombies and pop Ring of Fire if one of you has it equipped. People in the Ring of Fire will most likely need an assault rifle, LMG, or Death Machine to output proper damage. If someone has Frenzy Guard upgraded, it will also be beneficial to have them use that to take the attention of the zombies further.

While Legion is stuned, anyone shooting from the Ring of Fire needs to work together to aim at one of the three electric orbs floating around him. Make the orb explode, and a third of Legion’s health will disappear.

When he comes back into the fight, really focus on building up your Field Upgrade as fast as possible. If you have a Chopper Gunner, they are pretty helpful for shooting into Legion’s chest to get him to teleport again, but the Death Machine gets the job done as well.

Repeat the process we have outlined here three times within the nine-minute timer and Legion will go down, meaning you have completed the first Outbreak Easter egg quest.