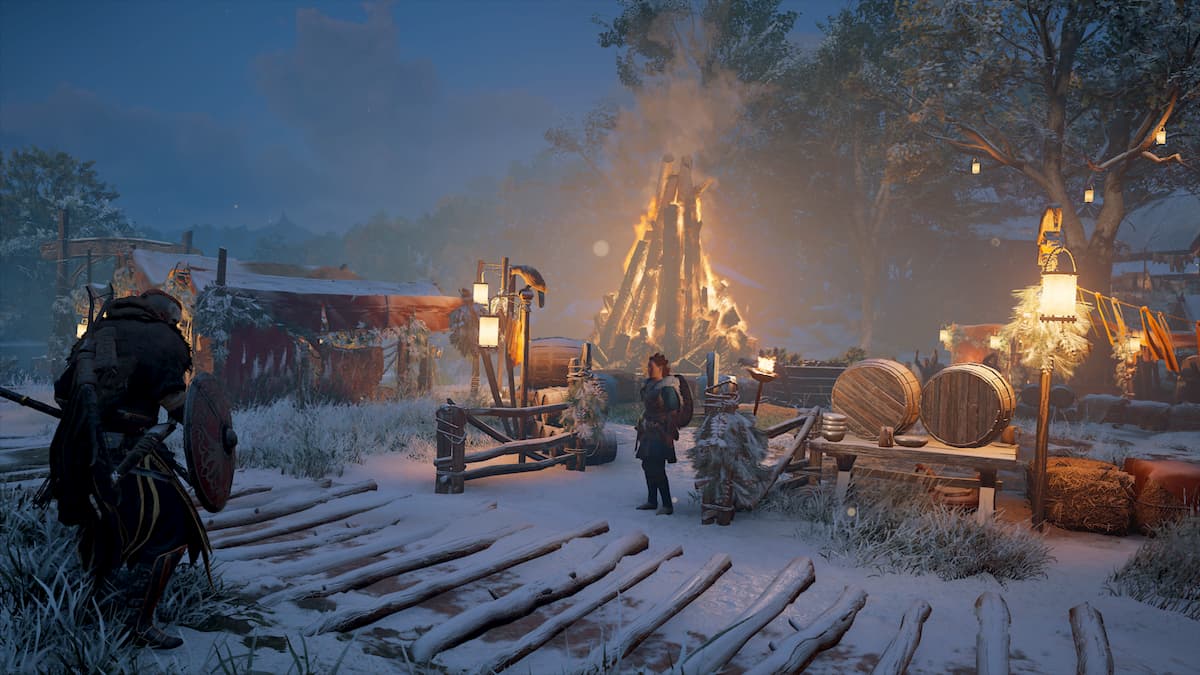 It wouldn’t be a traditional Viking Yule Festival without a brawling tournament. In Assassin’s Creed Valhalla, there’s a brawling event where you have to battle 10 opponents. If you fail to make it to the last competitor, fear not, you still receive five tokens for every combatant you defeat. These Yule Tokens can because of a variety of limited-time items, so make sure to fight as many times as you can until you reach the end.

Where to start the Yule Brawl

The Yule Brawl is being held on the east side of the festival. It’s being held by Sunniva, and you can speak to them to start fighting.

How to beat all fighters in the Yule Brawl event

The battles steadily become more difficult as you progress through the brawls. However, after the end of each fight, Eivor steps to the side to take a quick drink to regain his health. The downside to this is he becomes drunker, which has some negative effects in the later fights. You can take and use rations with you in these fights, and we recommend reserving those for the final battle.

The first two battles are fairly similar. You’ll battle a combatant who has a small amount of health. You can probably take them down without too much effort, and if they do land a lucky hit against you, you’ll regain it before going into the next round. We recommend parrying their attacks and then going in for several hits.

Now, typically the third combatant is a third version of the previous two fighters. But if you complete the Cow Catcher quest for the Yule Festival, you’ll be able to battle against Bertham, and he goes down with a single hit, so completing that quest is a decent idea to make sure that you have an easy round, even if it is closer to the beginning.

The fourth fight, the one after Bertham, is another like the first two. Repeat the process, parry the attacks, and then use your light hit combos to take them down.

When you reach the fifth fight, you’ll notice that Eivor’s drinking has started to get to them so that the screen will be swaying around a bit and slightly blurry. Also, the combatant is slightly stronger. It will take three parries to lower their stun meter, they have additional health, and they dodge far more of your hits, though typically at the beginning. While it’s slightly more difficult, it is similar to the others.

The sixth brawl is where you lose your lock-on ability. You won’t be able to place a marker on the person you’re fighting, so you’ll have to move your camera around to keep track of them. The fighter is also exceptionally skilled. They will easily dodge a majority of your light and heavy attacks, so you’ll need to wait until you can parry a strike and then perform a combo. You might be able to land one or two without using the parry, so it helps to spam and corner them.

The seventh fight features a Goliath, a tall, fat fighter that will regularly attempt to drink from a horn and smash that attack against you. The Goliath performs so many unblockable attacks, we found it best to three lights and then dodge away from them. It’s a battle of attrition, so we recommend trying to keep your distance and watch the fighter’s movement. The Goliath does a combo with three heavy swings that you can parry, but we recommend dodging out of the way. Parrying this attack can be tricky, and it does the most damage to you, so you’re better off getting out of the way.

The eighth and ninth fight features similar fighters that swing their arms around, perform several, if not exclusively, unblockable attacks that do some heavy damage to you. While different from the Goliath, you want to use the same strategy, except you can probably get some more light combos in without having to dodge away as much. Unfortunately, with them performing so few attacks that you can parry, you’re better off dodging, waiting until they’ve stopped attacking, and then rush them with a full combo.

The final battle features a fight that looks like the size of the Goliath but fights like the combatants from rounds eight and nine. This fighter is extremely agile, despite being huge. They will grab you to the ground and attempt to body slam you to do two forms of damage from an unblockable attack. They’ll rush you, throw you around, and take the battle to you. Essentially, again, you want to avoid and dodge their attacks as often as possible. If you can parry a strike, use a three-hit combo, and then dodge away because they likely have a major attack coming for you. Use as many rations as you have when battling this opponent.

After you win the tournament, you’ll receive 80 Yule Tokens for your trouble.