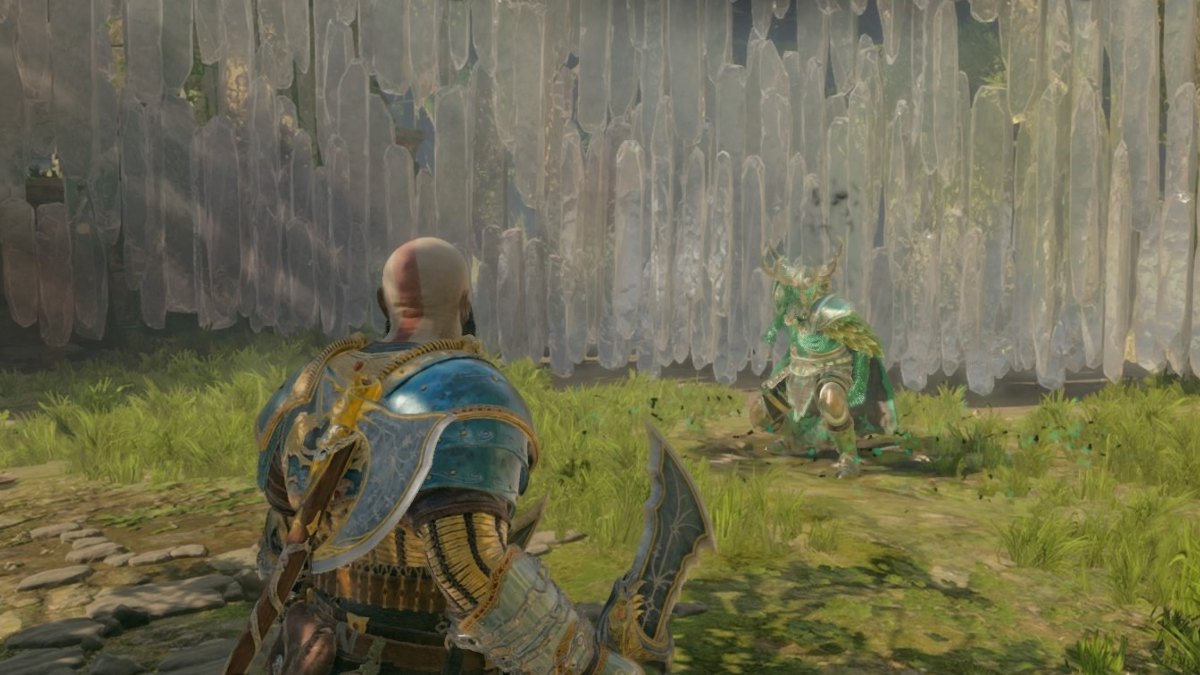 God of war Ragnarok has some powerful optional bosses called Berserkers across the Nine Realms. They are extremely tough and require proper concentration and technique to defeat. One of the Berkserkers you’ll surely meet is Hvitserkr the Bold. He is one of the more forgiving Berserkers, but in no way is he easy to kill. Here is how you can defeat Hvitserkr the Bold in God of War Ragnarok.

Related: How to defeat Haklangr the Bearded in God of War Ragnarok

The Berserker Gravestone of Hvitserkr the Bold is located in Vanaheim, specifically in Pilgrim’s Landing. It is located south of the River Delta and west of Oatun’s Garden.

You’ll have to approach the Gravestone and interact with it to fight Hvitserkr the Bold.

Hvitserkr the Bold is generally a mid-level Berserker, as in he is not too tough like Haklangr the Bearded, but not as easy as Fraekni the Zealous. So, you’ll need to be smart as well as careful about how you approach this boss specifically. While his moves are easy to predict, his attacks do some serious damage. All three of your weapons can prove to be effective in this fight.

One thing you have to be aware of in this fight is that Hvitserkr is not alone. He’ll summon a few Seidr and Nightmares occasionally to harass you at certain moments. These enemies are poisonous so try to take them out quickly. While dealing with them, you must not take your eyes off Hvitserkr as he’ll come to attack you at any time. A smart way to deal with all of them is to make your companion deal with the Seidr and Nightmares while you deal with Hvitserkr.

Hvitserkr the Bold mainly goes for poison attacks during the fight at the start. One of them is through green elemental attacks which travel linearly. This can easily be blocked with the shield or dodged. The other is through projectiles while he is up in the air. These are unblockable so dodging them is the best option. Seidr and Nightmares also will be summoned to attack you. It is at this moment, where you’ll have to go all-in on attacking him. Use a proper light attack combo and finish off with the heavy attack. Also, use your best runic attacks to weaken him severely. The goal is to fill up his stun meter and make him lose a good amount of health.

When he loses more than a bar of his health, he’ll start to summon Seidr and Nightmares again. Let your companion deal with them while you focus on Hvitserkr. He’ll sometimes come up close and go for short combos as well as flying lunges like other Berserkers. During this time, go for shield parries and counters as he’ll be stunned shortly. Go with light attacks combos and use any heavy runic attack with it too if possible.

He also does a flying out-of-sight attack where he goes up and crashes down on the ground. The area of effect will be marked green so you will need to dodge out of the way. If you don’t you’ll lose a lot of health here. There is a small window to attack him after this attack. Try to use the Spartan Rage during this time as well as a Relic like Realm Shift.

Hvitserkr the Bold also becomes much more unpredictable with his stronger attacks after you take a few bars of his health. During this time his most powerful attack is through a long-range attack via explosions. He flies up and summons corpses and makes them explode. These depend on your movements so the best option is to stay at the edge of the arena.

The varied attacks leave very few openings for Kratos so you need to be cautious about how to approach him. Before he goes to the air, attack him with Draupnir Spears and as soon as he starts his attacks, detonate them. That will stun him for a while and you can get some good hits. Also, try to keep him on the ground by overwhelming him with some combos as well as the runic attacks.

Continue with the methods above and his health will be fully depleted. Then use the Finisher to finally defeat him. The reward for defeating Hvitserkr the Bearded is the Pommel of the Nine Realms, Tempered Remnants, Shattered Runes, and Bonded Leathers.