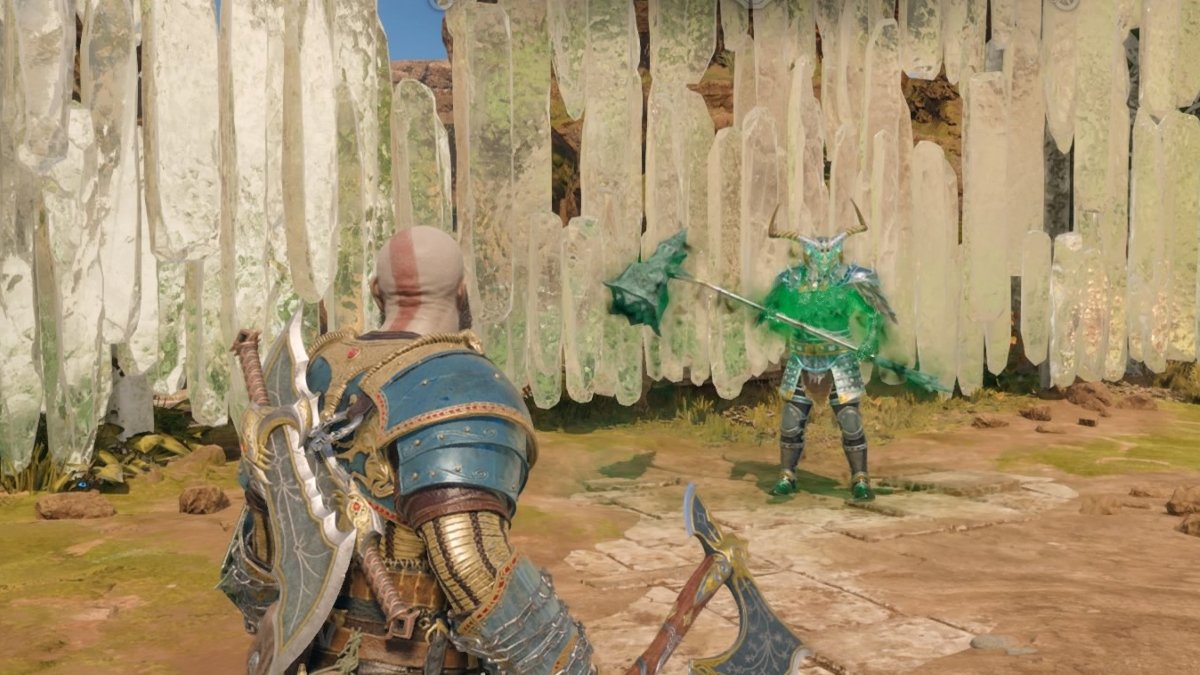 God of War Ragnarok has tough optional bosses called Berserkers across the Nine Realms. These Berserkers are all unique in their attacks and abilities, making them a formidable challenge for Kratos and his companions. One of the Berserkers Kratos can meet is Haklangr the Bearded. This is an extremely tough boss who requires a lot of time and dedication to beat. Here is how you can defeat Haklangr the Bearded in God of War Ragnarok.

Related: How to defeat Fraekni the Zealous in God of War Ragnarok

The Berserker Gravestone for Haklangr the Bearded is located in Vanaheim, specifically in The Sinkholes. You won’t have to search for it as it is right in front of the Mystic Gateway there.

You’ll have to approach the Gravestone and interact with it to fight Haklangr the Beardless.

Related: How to defeat Hardrefill the Callous in God of War Ragnarok

Haklangr the Beardless is an extremely tough Berserker as he possesses an elemental shield in different moments of the battle. You will need your weapons and armor to at least be level 8 to even stand a proper fighting chance against him. Additionally, his movements and attacks are varied, making him tough to counter and parry. In this fight, all three of your weapons will come in handy. Additionally, equipping defensive enchantments will give you an edge.

Related: The 15 best Enchantments in God of War Ragnarok

Initially, Haklangr starts with an elemental shield when you meet him. There is a short moment when he is standing still before he summons his shield, where you can put in a few light attacks. The shields can possess different elemental colors like frost, or flame. Whichever he summons, you’ll have to make sure you don’t use an elemental weapon of the same type. For example, when he summons the white shield, use only the Leviathan Axe or Blades of Chaos as they will damage him more than the Draupnir Spear.

Haklangr goes for mainly melee attacks which you can parry or dodge. His melee attacks come in combos of five or six which can be parried. If you fail to parry, he will finish off with an unblockable slice attack. Focusing on him is necessary as his reaction speed is quite good. When you have the chance, do as much damage as possible and move away.

Another attack he goes for is an aerial attack, which is common among the Berserker bosses. He’ll disengage and fly back and try to hit you. This is a great moment to parry if you time it carefully. When he is stunned, use your best runic attacks. After that, he continues with melee attacks. Then, do your combos of light and heavy attacks combine with some shield strikes.

He also does a strong unblockable slam into the ground which covers a large area. As it is unblockable, you will have to dodge and move away as they do serious damage. Before he gets up, there is a very short window where you can land a few light attacks.

Haklangr also goes for powerful combos of blockable and unblockable attacks through lunges, slams, and slices. You’ll have to be aware of what he does next. These can easily overwhelm you, so the best bet here is to use the Spartan Rage. Using this will land quick blows to him and do some damage. Additionally, use your companion’s arrows as a side weapon. The goal is to fill up his stun meter and make him lose a huge chunk of health.

Haklangr also goes for a wide attack where he raises his weapon and covers a large area with green mist. This is essentially the area of impact and you will have to dodge it unless you want to lose quite a bit of health. It is one of his most powerful attacks, so be careful whenever he initiates it. You could go to the area near him where the mist isn’t present and attack him whenever he completes the move.

Haklangr will summon his elemental shields for the second and third time when he has half health and just before he dies. Be extremely careful with this as his attacks become much quicker and unpredictable. Make sure you have at least one runic attack left to inflict damage. Using Relic attacks like Realm Shift will also slow him down, during which you can attack. You need to be smart to deal with him, especially when he summons his elemental shields.

Continue with the method above and his health will be completely depleted. Then, you can use the Finisher to finally defeat him. The reward for defeating Haklangr the Beardless is the Chaos Flame, Tempered Remnants, Bonded Leather, and Shattered Runes.