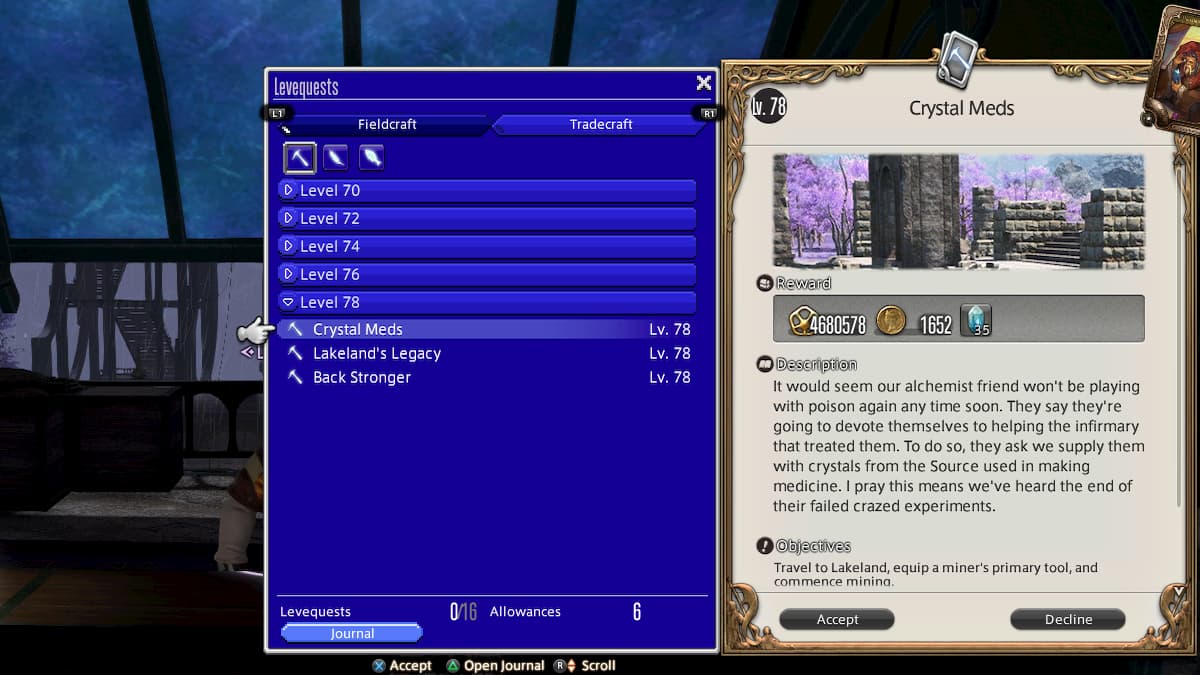 When you need a break from combat jobs, gathering jobs in Final Fantasy XIV lets you chill out, explore the wild, and collect your own crafting materials. Disciple of the Land professions level up by gathering items, going out to find trees, mining points, or fishing waters. Gatherers also have access to fieldcraft levequests, where they seek out requested items for these quests and turn them in for big rewards. These fieldcraft levequests are a great way to quickly level your gathering jobs.

New players can only unlock levequests after progressing a bit through the main story. You’ll first need to finish one of these level 9 quests, depending on your starting city — “Way Down in the Hole” (Ul’dah), “Just Desserts” (Limsa Lominsa), or “Spirithold Broken” (Gridania).

Then make your way to your city’s adventurers’ guild. There will be a Levemete NPC with a level 10 quest — “Leves of Horizon” (Ul’dah), “Leves of Swiftperch” (Limsa Lominsa), or “Leves of Bentbranch” (Gridania). Finish this quest to unlock low-level battlecraft and fieldcraft leves.

Pick up levequests in your level range

For gathering jobs before level 50, this gets complicated. After completing your initial “Leves of [Place]” quest in the starter cities, you have to do more of these. Spread out across camps in La Noscea, Thanalan, the Black Shroud, and the Coerthas Central Highlands, you’ll find other Levemete NPCs offering these same “Leves of [Place]” quests. You have to do these quests on a battle job at the appropriate level to unlock additional fieldcraft levequests. This means gathering leves are gated behind combat quests.

However, once you get to level 50, this problem of spread out levequests goes away. You’ll find all level 50-58 fieldcraft leves in Ishgard, 60-68 leves in Kugane, and 70-78 leves in the Crystarium. Wherever the main hub is for your level range, that’s where the latest Levemete NPC will be. The leves are still gated behind combat, as you’ll need to progress through the main scenario quest on a battle job. But you’ll no longer have to run around doing all of the unlock quests in the open world.

Leve allowances allow you to accept levequests. Check your journal, and you’ll see your levequest allowances listed below. One leve allowance lets you accept one levequest, up to 16 at a time. All players automatically earn 3 allowances every 12 real-life hours. You can hold up to 100 leve allowances at one time. The Timers page in the menu shows when everyone gets their next leve allowances.

Go out and gather at the requested location

This is specific to Miner and Botanist only. After accepting a fieldcraft levequest for these two jobs, you’ll receive instructions on where to go next. Once you’re in the correct zone, the mini-map will have your levequest locations outlined in red. Head to that area, open your levequest listed under your current quests, and select Initiate. This will start a timed sequence. Gather the items from the gathering points that appear within the allotted time. Whenever you’re done, turn in the completed levequests back in town for your rewards.

Things are a little different for Fisher. You just have to go out and fish up the requested fish. You will have to do some research to locate the specific fish, as the levequest will not tell you where to go. Alternatively, you can just buy the fish on the market board and call it a day. However, you choose to get the fish, return to town and turn them in. Rinse and repeat as many times as you want, or until you run out of levequest allowances.