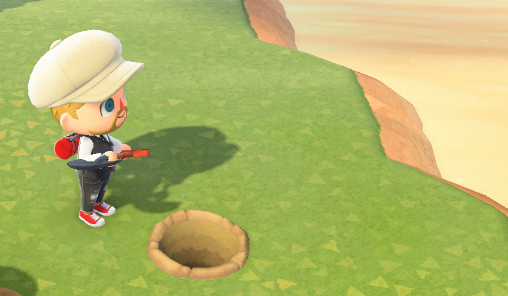 Without a Shovel, you aren’t going to get much done in Animal Crossing: New Horizons.

The tool is useful in so many ways, from digging up fossils to donate to your museum, to moving around flowers and trees. It has so many uses to you and your island, so getting one early is pretty ideal.

But how exactly do you unlock one? Or, more importantly, unlock the Flimsy Shovel DIY recipe to craft your own?

Well, to get the Shovel, you will need to acquire the Flimsy Shovel DIY recipe by proceeding through the game. There are a few checkpoints and things you will need to unlock first to get it.

First things first, you will need to have unlocked the first stage of the Museum, which requires you to give 5 different species of Fish or Bugs combined to Tom Nook to make Blathers come to your town.

After giving him five species and setting up the tent he provides you, Blathers will appear in your town the next day. Head to the newly opened Museum and talk to Blathers. He will then offer you two new DIY Recipes, which include the Shovel and the Vaulting Pole.

Once you have the Flimsy Shovel, it’s just a case of crafting it using the materials needed for it at a DIY Bench. It won’t last long though and will break after a few uses, so make sure that you have enough resources available to craft multiple until you have enough Nook Miles to get the sturdier Shovel DIY recipe from Resident Services.