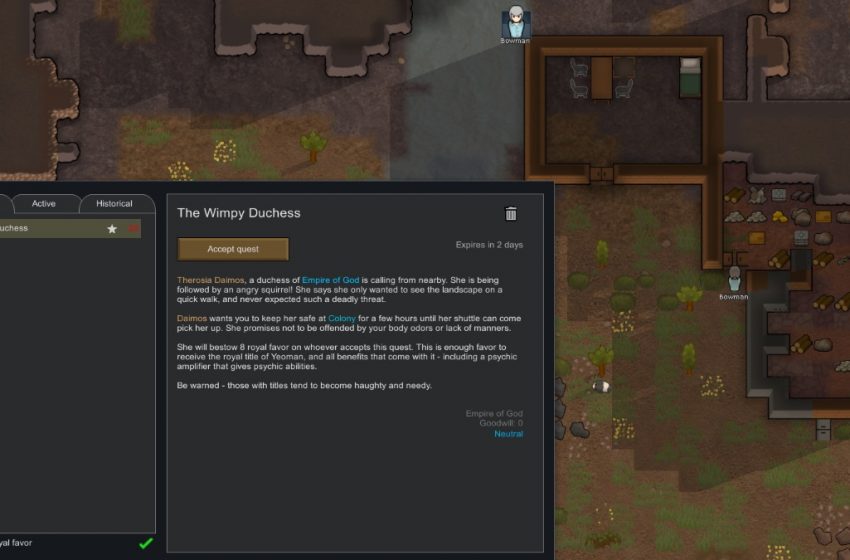 Rimworld had a surprise DLC, Royalty, launch alongside their 1.1 update. The new expansion introduces a new way to play the game with brand new traits, such as characters becoming royalty and gaining titles. These titles allow the character to call upon support from additional NPCs, should they need it. To gain a royal title, you need to complete a quest on behalf of the new factions in the game.

You must complete a quest given to you by a royal faction to receive a royal title. These quests will vary in severity, such as protecting a royal ambassador from a rampaging squirrel attempting to attack them. They may need to remain at your colony for a few days to properly recover, meaning you need to provide them with the most hospitality you can offer someone of their stature. A quest will become available to you randomly, so play through the game naturally, and work on your colony until one pops up. When a quest does show up, look at the bottom left section and you should see an option to accept a royal favor or not. This section lets you know if it’s a royal quest or not, along with the quest’s description.

After you complete the quest, a character in your colony who accepted the quest receives the royal points for completing the quest. The more royal points you acquire from one of the royal factions in your game, the more rewards and benefits you receive for that particular character. However, as their rank grows, and they gain more royal points, their specific needs increase, and they become more strict in what they desire in their colony. For example, they may start making demands from others in their settlement or require a specific type of bed to sleep in, like the royal bed, drapes, a throne, or something to show how dignified they have become.

You want to be careful when having a character gain a royal title because their needs increase. If you can’t meet them, they could become more difficult to control in your colony. You can choose to not accept royal points from a royal quest, thereby gaining other available rewards from that faction.