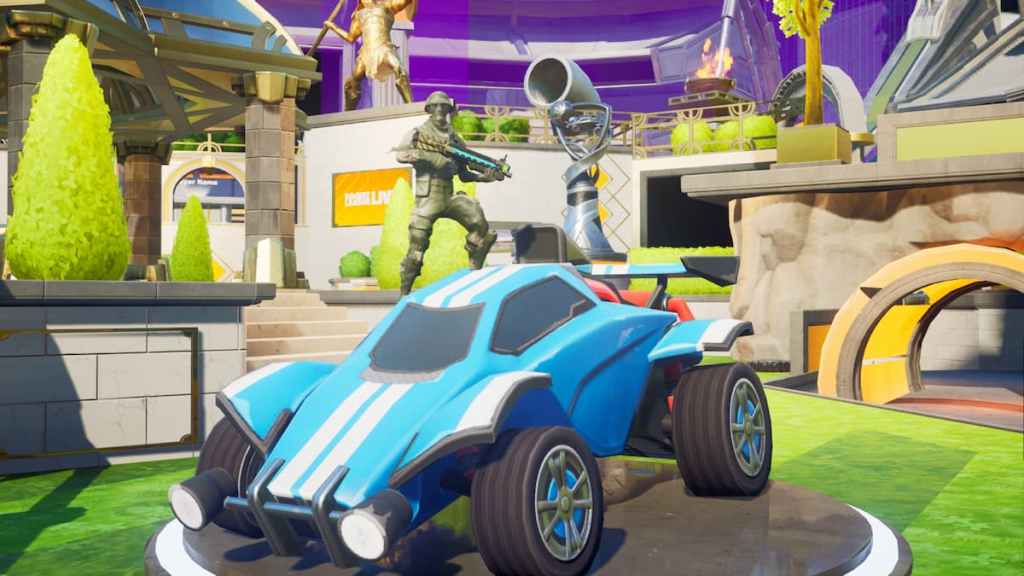 To celebrate the Rocket League World Championship, Fortnite is now offering a new Rocket League Live questline for players to unlock cosmetics based after the sports game. These exclusive items shouldn’t be underestimated either, as completing these limited-time challenges can reward a Glider and one massive piece of hardware to put on your skin’s back. Here’s how to unlock every Rocket League Live reward in Fortnite.

The crossover’s challenges can only be completed by playing the RL Live Deathmatch Creative map. Although it cannot be found in the main menu, you can head over to the Island Code tab and enter the following code to play it: 8205-6994-2065. You will then be sent to an arena to take on opponents in a two-team Rumble match where its challenges simply task you with dealing damage and earning eliminations. For instance, players who put 1,500 damage into enemies will unlock the Rocket League Trophy Back Bling. All of the rewards and their challenges can be discovered below.

Related: Fortnite is already asking for your Fortnitemares 2022 Halloween creations

You shouldn’t hold off too long to collect these free goodies. The RL Live Deathmatch map and its dedicated challenges are only slated to last until August 14. Until then, the map will also provide in-game screens for Rocket League fans to watch the World Championship matchups. Additionally, this may not be the only major crossover the battle royale holds over the summer. Leakers have recently alleged possible Dragon Ball Z skins and challenges could launch later in August.