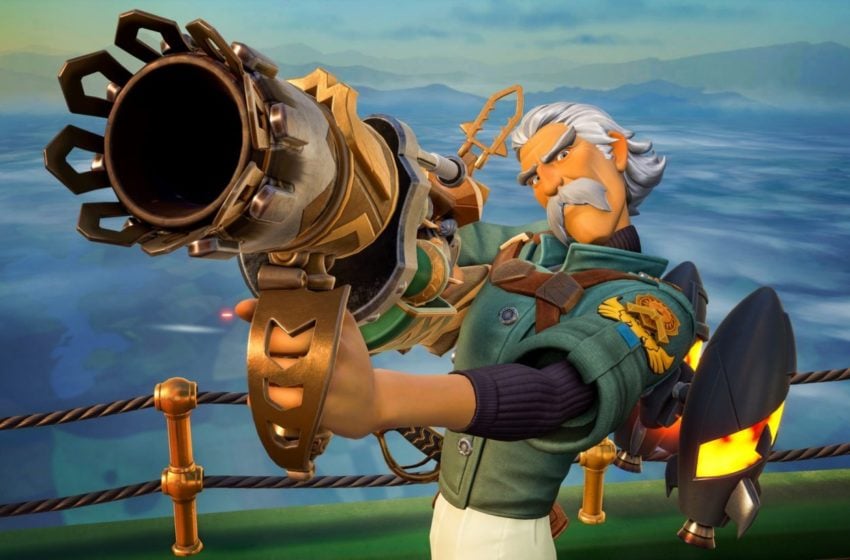 Most of the characters duking it out in Rocket Arena‘s Crater are young, spry, and Instagram ready. Topnotch might have gone gray a long time ago, and may need a jet pack to get around, but he is arguably the fliest of them all. Sure, he can actually fly, but have you seen his mustache? He’s also a great and versatile character to play with, albeit one that can be hard to get a handle on.

Taking Topnotch to the top

Topnotch is a solid mix of speed, agility, and firepower, but he can be hard to use if you aren’t executing all his abilities with care. With his jet pack, though, he does exceptionally well in all arenas. In arenas with verticality, he can easily get to hard to reach areas. In more open environments, he can fly up and reign terror from above. Wherever it is that you’re playing, you’re going to want to always be using his jet pack to get around. You’re also going to want to always be using his arsenal of explosives fire power.

Topnotch can be an especially effective choice for knockout if you feel comfortable with his arsenal. He can dish out plenty of damage and wreak tons of havoc with his impressive firepower. His jet pack and mobility will also let you get out of dicey situations pretty well, keeping down your opponents’ score. Keep in mind, though, if you fly too close to the top of the arena, it can be easier for opponents to knock you out. Don’t overextend Topnotch’s flying ability to your detriment.

Topnotch is—shall we say—a topnotch rocketball player. If you’re playing as him in this mode, you’re going to want to be the one getting the ball and scoring the goals. With his jet pack he can easily get up and around the fracas. If you’ve got good aim—and depending on the arena—you can pretty simply fly as high as you can and toss the ball into the goal.

Topnotch’s strengths are a little less suited to mega rocket. You’re not going to be flying around as much, although his jet pack can help him quickly get to new zones, or get back into the action if he gets knocked out. Regardless, his arsenal of heavy weapons does work wonders to quickly clear out the control zone when multiple opponents are crowding into the area.

Topnotch is just as good in this mode as all the others. If he gets the treasure chest, he can easily fly to safety. During the coin collecting phase, he’s great at picking up the scraps that others have missed.

All in all, you can’t really go wrong with Topnotch. It takes some time to get used to how to use his rockets most effectively, but his jet pack is simple to use and simply the best. he works wonders in all game modes and is a great choice for anyone looking to rack up those points for their team.