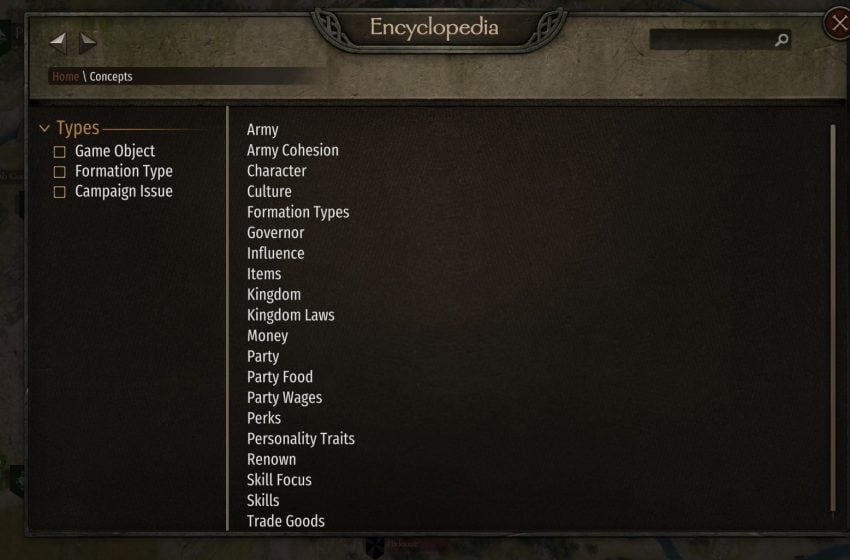 Knowledge is power, and learning about some of the basics in Mount and Blade II: Bannerlord can take a bit of time. An excellent tool available to every player is the encyclopedia. You can access it whenever you’re playing the game, and it provides a wealth of information on numerous topics in the game, along with notable people you can freely interact with and encounter.

The first thing you want to know how to do is to access the encyclopedia. Unfortunately, you won’t find it under any of the menus or in the pause menu. To access it, you need to press the N button on your keyboard. Hitting it brings encyclopedia up, and you can now freely access several details about the game that you did not have before. For example, you can read about the notable heroes and figures scattered all over the game, and learn about their factions. You can also cover basic concepts you may want to become familiar with at the start of the game, such as formation types, kingdom laws, money, party food and wages, what do personality traits mean, and much more.

These are the different subjects for each category, and what you can find within while browsing throughout the encyclopedia:

If you’re ever looking for a particular person or location in the game, investigate the encyclopedia, type their name in at the search bar found at the top right of it, and find the results. You can click on that icon to then track them in the map, or you can see where that individual as last spotted, tracking that settlement and then heading to it on your game map.

The Bannerlord encyclopedia is a great tool and something you want to master early on in the game. Make sure to use it often, and always reference it should you have any gameplay questions or if you want to locate a particular individual of a faction.