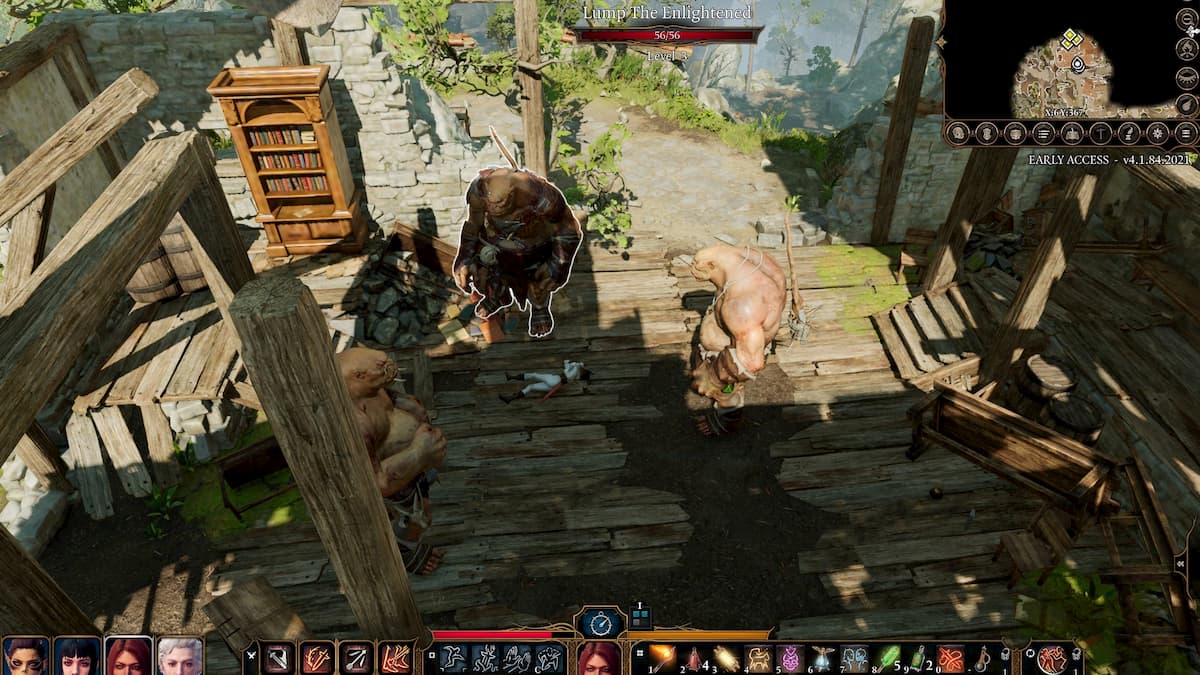 In Baldur’s Gate 3 there’s a Blighted Village where various groups of goblins roam around freely attacking and pillaging anyone still left there or those who visit it. Much of the village and the area is on fire, having been destroyed in the goblin raid. You need to pass through it to continue to the main goblin camp and continue your adventure. In the corner of the village is a trio of ogres, and one of them is named Lump the Enlightened. When we played this scene, we were Astarion.

Lump speaks far better than any ogre should due to wearing a circlet that raises his intelligence to 18. The circlet can be yours if you and your party members defeat him and his compatriots in combat, but you can also recruit him to work for you by acquiring his war horn.

When you first approach the trio of ogres, they are standing over a tiefling who likely wandered too close to the village. She, unfortunately, did not make it and is now a feast for these ogres. The trio are discussing what the tiefling likely tastes like, and upon seeing you, Lump asks if you are a friend or food. You have three dialogue options, and one of them was special because Astarion is an elf.

However, for those who wish to recruit want to go with the deception route. You can go with the first option if you’re an elf, and it shouldn’t cause immediate combat, instead, it adds more dialogue between you and Lump. Once you pass the deception roll, Lump and his ogres believe you, although they’d much prefer you to be food. They deem you friend. From there, you have four more additional options.

The final choice allows you to depart the conversation and return to the three later. You can leave and then return to Lump to speak to him again, but he will only have one option available, asking why he does bear a mark of his own.

Upon asking why he wears no mark, Lump reveals he only has two things driving his desires: food and gold. The goblins sate his need for gold, and the food comes with the job. Lump does not wish to follow any god or believe in any cause other than his own. Upon learning that any type of gold is good for Lump, you can offer him to work for you. You need to make Lump an offer and tempt him. You have four options.

For those who have 500 gold in your inventory, you can exchange it with Lump to receive his war horn. That’s all you have to do, and the item will be in your inventory. However, for those who would rather avoid paying Lump that sum and convince him to work for free, you can try option two and option three. We recommend going with option three, for Lump to feast on the flesh of the fallen, as it avoids promising Lump money in the future. You’re better off promising him the dead you kill in a battle rather than gold, but the choice is up to you. Both options two and three require you to pass a rather difficult charisma check. However, should you fail, the only option you can go with is to give Lump 500 gold pieces.

Once you have the war horn from Lump, it’s a one-use item that you can use to summon him and his two ogre pals. They’ll jump into combat and assist you for an encounter. After the fighting, he and his friends depart, and you can’t use the war horn again.