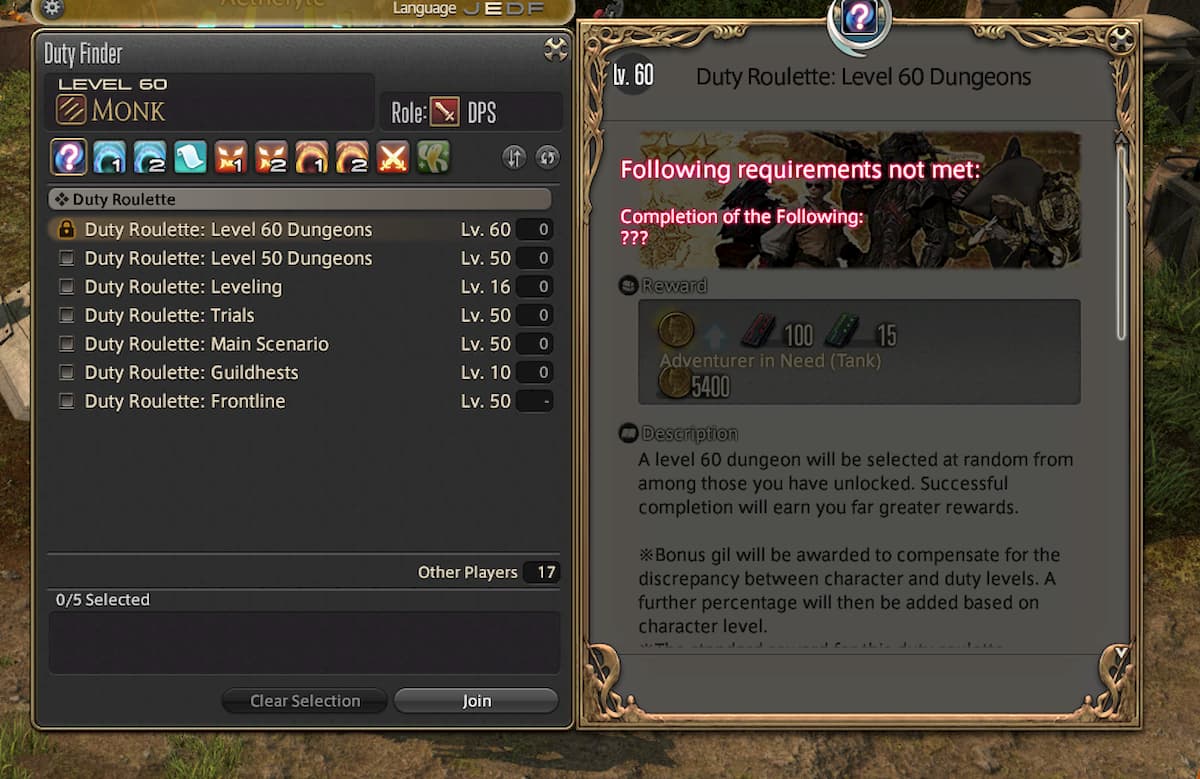 The Duty Roulette in Final Fantasy XIV ensures that most content remains relevant for years to come. Several of the game’s dungeons, trials, raids, and PvP encounters are each separated into their own category on the first page of the Duty Finder. You can then queue up for any specific category, or roulette, joining any duty among the ones available. Within each roulette, the specific duty you land is random. You’ll earn additional rewards per day for each roulette, such as gil, Allagan tomestones, and company seals.

Expert: The highest-level story dungeons. This roulette offers the largest bonus of the weekly-capped Allagan tomestones. There aren’t many dungeons to choose from here, easily making things repetitive after a while.

Level [XX] Dungeons: Currently level 80 in Shadowbringers, this is traditionally where the other level-capped story dungeons are. Any dungeons with a lower item level requirement than the Expert batch, you’ll find them here.

Level [50/60/70] Dungeons: These contain all of the level-capped story dungeons at the lower tiers. During A Realm Reborn, these level 50 dungeons used to be Expert ones; during Heavensward, these level 60 dungeons were the Expert ones, and so on.

Leveling: All leveling dungeons available at your current level. This is a real dice throw, as you could land in Sastasha, the level 15 dungeon, at level 79 for example. But the roulette will give you additional rewards for any level discrepancies.

Main Scenario: This roulette only contains two level 50 “dungeons,” Castrum Meridianum and the Praetorium, as the final main scenario capstones from A Realm Reborn’s story. To facilitate new players, the cutscenes in these dungeons are unskippable. Veteran players can rush through the bosses, but they will have to sit through all cutscenes with everyone else. However, there’s a hefty experience points bonus at the end for your patience.

Guildhests: This contains the rarely-used guildhest content aimed at beginners. Guildhests teach players the most basic aspects of combat. The rewards from this roulette sadly aren’t too impressive.

Alliance Raids: You’ll find all 24-man alliance raids here, except for when a new one first releases. While we say “all,” it is frustratingly common to land in the level 50 alliance raids over and over. Getting certain level 70 raids is a toss-up between a nice, clean run or an agonizing wipefest. But the nice bonus reward of weekly-capped Allagan tomestones makes the risk worth it.

Normal Raids: This roulette has all of the non-savage 8-man raids, excluding the level 50 Coils of Bahamut series from A Realm Reborn. When a new raid tier releases, you’ll find these fights within right after you clear them.

Mentor: There’s also the Mentor roulette. For players who achieve the Mentor status, they have the option of queueing into this roulette to help others. It contains every fight in the game, including extreme-level primals from previous expansions, and excluding savage or ultimate-level raids. You could get absolutely anything, from a random low-level guildhest to one of the more punishing extreme primals. The Allagan tomestone rewards are pretty sad compared to other roulettes, but running this does count toward your achievement rewards for Mentor-exclusive titles and mounts.

Frontline: Finally, there’s the Frontline PvP roulette. This cycles through the available Frontline matches, listed under the Information section of the duty description. Whichever one is listed there will be the one you get. This changes daily. It’s a nice way to rack up extra Wolf Marks each day.

In addition to the extra Allagan tomestones, gil, and company seal rewards, there’s the adventurer-in-need bonus. This bonus rewards players who queue up as the role “in-need” for the Duty Roulette, or whichever role the queues are short on. You’ll gain an extra chunk of gil for doing this. Unlike the daily rewards themselves, you can keep running Duty Roulettes as adventurer-in-need as many times as you want.

Next to each Duty Roulette, you’ll see the blue, green, or red icons, denoting the adventurer-in-need as either the tank, healer, or DPS roles, respectively. It’s pretty common for Alliance raids to have DPS in-need, since these always need 15 DPS total, with only three tanks and six healers in comparison. The other roulettes bounce around between tank and healer as the roles in-need. But sometimes you’ll see tank or healer for Alliance raids, or DPS for other roulettes.

Running your daily Duty Roulettes is a great way to passively make gil over time, especially as the adventurer-in-need. It’s consistent, it’s reliable, and it only costs you time. Sure, you’ll have to repair your gear every so often, but that’s the case with all battle content in the game. If you’re not a fan of dealing with the market board for your gil, this is a great alternative.