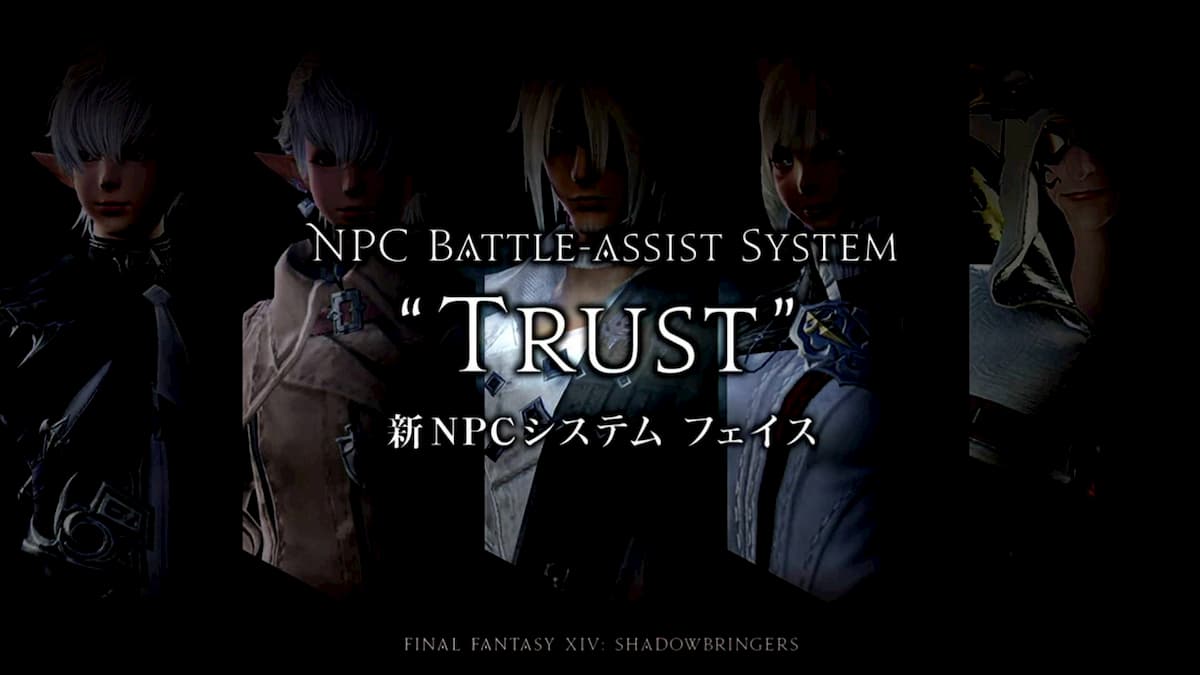 Final Fantasy XIV: Shadowbringers introduced the Trust System to the game. Borrowing the concept from Final Fantasy XI in years past, the Trust System allows players to enter dungeons with AI companions instead of real people. The AI NPCs are among the Scions of the Seventh Dawn, a group of notable characters who have been with the player since the beginning of A Realm Reborn.

The Trust System is great for players who want to try out a new dungeon, but are worried they’ll bring an actual party down with their inexperience. Running in with Trusts instead gives everyone a chance to learn the dungeon’s mechanics first. Or they can skip playing with real people entirely in favor of the Scion characters. Getting started with the system is pretty easy, but as of now, there’s a steep requirement before you can begin using it.

You first get the option to use Trusts when unlocking the level 71 dungeon in the Shadowbringers expansion. That’s quite a ways off for new players or anyone not currently at the Shadowbringers story quests. Because the developers introduced the system as a new feature with the expansion, it’s currently limited to dungeons released with patch 5.0 and after. But once you get access to the system, you’re (technically) free to bring Trusts along for every dungeon, including the story dungeons at level 80.

Right when you unlock the level 71 dungeon, you’ll have the option of speaking with the Scion NPCs nearby. They’ll bring up the Trust menu, which you’ll use to select your party members and register for the duty. If you’re running as a healer, for example, you will always have at least one tank and two DPS characters to choose from. Then you’ll head inside the dungeon as normal, without waiting for a queue. You’ll proceed to kill trash packs and bosses, just like if you were with real players.

While the Trusts are more conservative than real players (you won’t find Alphinaud DPSing too much as a healer, leaving your tank to die), they’re generally reliable to get the job done. You can even follow them for boss mechanics you’re unsure of, learning from where the NPCs go on the field. Each NPC has their own little personality quirks as well, like the hot-headed Alisaie being a little too trigger happy with the limit break as a DPS herself. Everyone has interesting banter throughout each dungeon as well, making the runs enjoyable.

Rewards and limitations with the Trust System

Aside from getting to run dungeons “by yourself,” the Trust System offers unique rewards. Your AI companions gain experience points each time you run leveling dungeons, just like you do. Getting the characters to max level unlocks different outfits for them, like Y’Shtola’s outfit from before Shadowbringers.

But there’s the catch. You have to level up your companions over time. While you’re free to jump into brand new dungeons with Trusts for your first time, regardless of their levels, you only get that one opportunity. For example, you can’t keep running the level 73 dungeon if your Trusts are stuck at level 71. You would have to continue doing the level 71 dungeon with them until your companions level up. So you can expect a bit of a grind to unlock those alternate outfits for your Scion friends. It’s up to you whether or not the grind is worth it.

The developers plan on expanding the Trust System over time, adding additional dungeons for players to access.