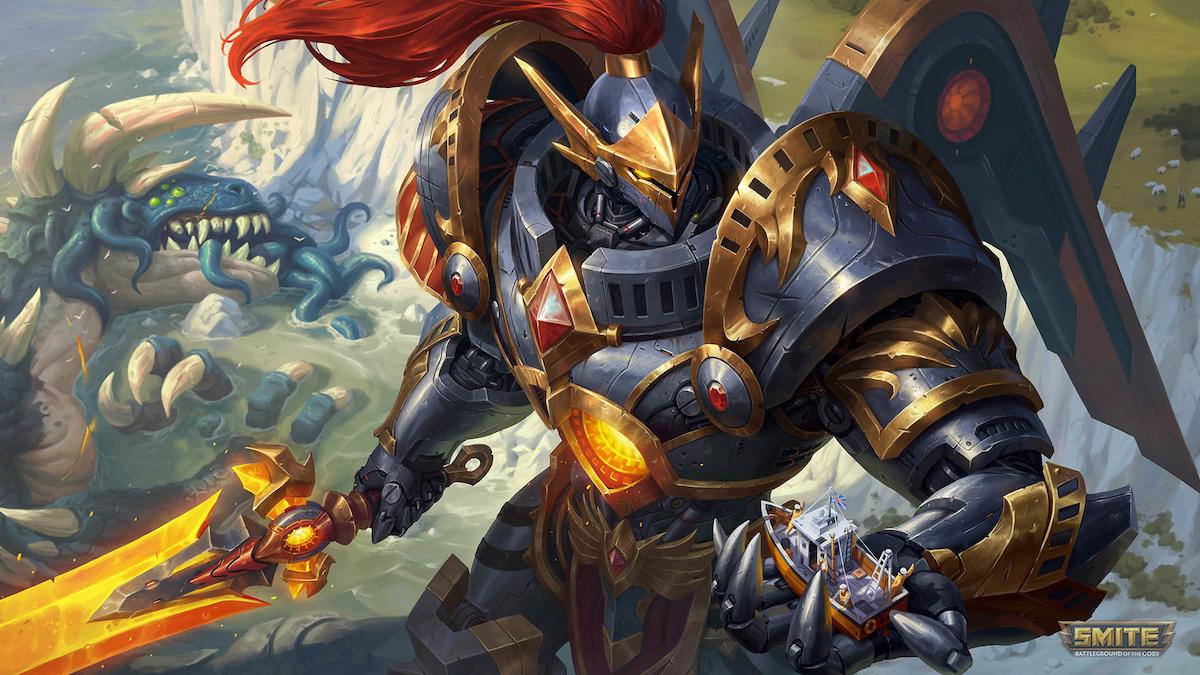 King Arthur is a strong warrior god in Smite if you know how to use his passives and unique abilities. You have to be careful with his passive, as no items increase his basic attack speed, his stance switches after each ability, and the stacks of steadfast stack with every successful ability he lands. You want to think about how to use him in a lane, and while he functions as decent support, he’s a far better solo role. We recommend using him in the solo lane.

With King Arthur primarily being in the solo lane role, you’ll want to make sure the first relic you purchase for him is teleport glyph. This will allow you to return to your lane’s tower after returning to base to buy items, heal, and repurchase any potions or wards you may need. Teleport glyph is a typical must-have for any god in the solo lane.

After that, given how durable King Arthur can be, you’ll likely want to go with shield of thorns, purification beads, belt frenzy, heavenly wings, or cursed ankh. If the enemy team has a lot of lifesteal, cursed ankh is an excellent purchase to start a team fight.

With the new starter items, King Arthur has plenty of options. Because he does not benefit from any boost to his attack speed, that limits his choices. You want to make sure King Arthur has plenty of sustain to remain in the solo lane as much as possible. A reasonable choice would be warrior’s axe, increasing his physical and magical protections, giving him some health, and flat damage reduction. Every time he damages the enemy god, he’ll steal 25 health from that target, and this can happen every 10 seconds.

If you’re looking for a few more unorthodox choices, manikin scepter would be good for the basic attack health and mana regeneration. Bluestone pendant is also an amazing option, but that would mean you probably want to go with a lifesteal or sustain item for King Arthur’s build after grabbing your starter item. Bluestone gives you a decent boost of HP5 and MP5, but it doesn’t give you the massive sustain from fighting or attacking as warrior’s axe or death’s toll does. Warding sigil is an excellent option if you’re battling against an enemy mage in the solo lane.

King Arthur will primarily fill a bruiser role, capable of taking massive amounts of damage and fighting back against most gods. You’ll want to pick between grabbing warrior tabi or reinforced greaves. Warrior tabi is a better option if you find yourself running low and mana and want a decent physical power boost. However, if your solo lane partner utilizes crowd control abilities or finds yourself being ganked by the jungle, reinforced graves can help keep you alive.

When it comes to King Arthur, he’s going to want more HP5, MP5, physical power, and defensive items that provide cooldown reduction so he can use his abilities more. Being able to fire off his abilities more often means he can build stacks of steadfast much faster, increasing his attack speed and damage mitigation.

This the ideal build to have for King Arthur.

If you find yourself battling a mage, or there’s a lot of magical power on the enemy team, leaning towards magical defensive items will help quite a bit.

For those who want to be a bit more aggressive and go straight into a fight with King Arthur, these are some worthwhile items you might want to consider.