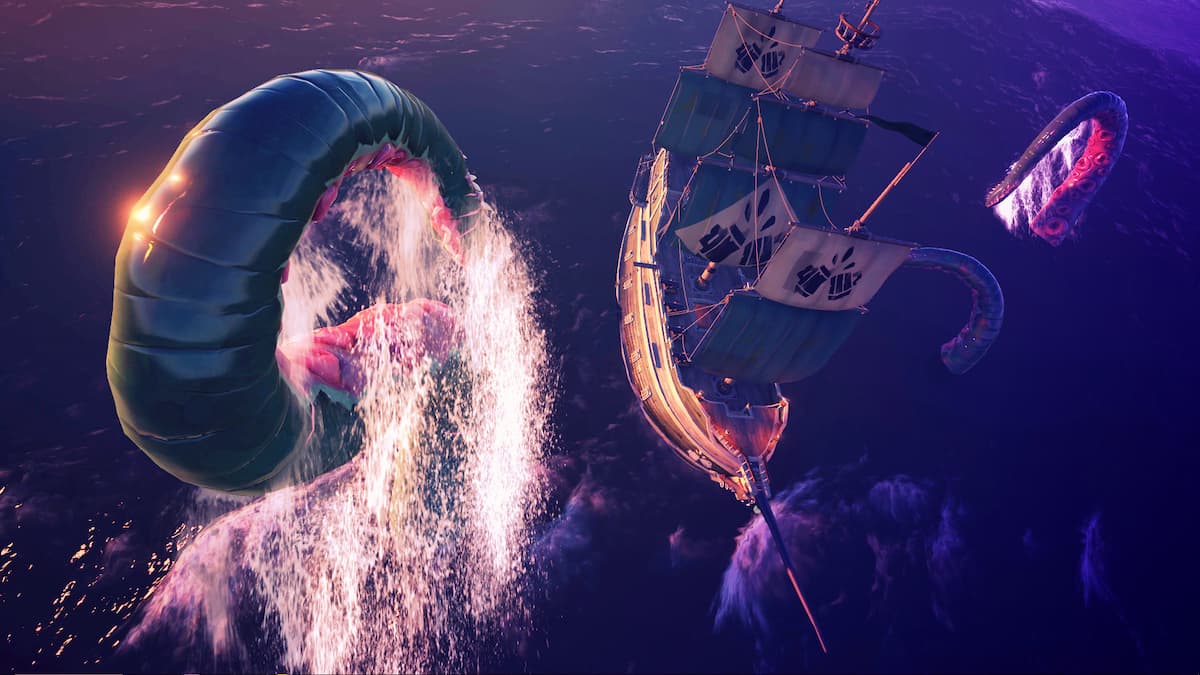 The Kraken in Sea of Thieves is a force of nature and requires extensive planning to fight. Be sure to stock up on extra cannonballs, planks, and bananas before going off in search of the beast. If you run out of supplies, chances are you will drown long before you come close to defeating it. Here is how to find and defeat the Kraken.

Is there a way to find the Kraken?

The Kraken can’t easily be tracked. More often than not, it is the one that finds you. Its location is hard to pin down and could require you to aimlessly float through the world until it spawns. From what we know, the Kraken will only spawn in deep water when there are no cloud events active on the map.

You know when a Kraken is about to attack your ship when the sea around you turns from a bright blue color to a murky black. This change opens up a small time window to escape from the beast before your ship gets locked in the black sea. If it traps you, your ship will unable to move until you either defeat the Kraken or it pulls you into the ocean’s depths along with your ship, crew, and all of your treasure.

How to fight the Kraken

The fight begins when the Kraken’s tentacles rise into the air from the ocean’s depths. You will want to team up with other players to be able to defeat the beast. Coordination will be essential for beating it the first time.

To deal damage to the Kraken, you need to target its tentacles one by one, hitting them with cannonballs, pistols, and other weapons. The Kraken is defeated when all of its tentacles go back underwater and the black murky ocean returns to its normal blue color. You will then be able to finally move your ship once again and explore the world freely.

Be sure to repair your ship

With so much chaos going on while fighting the Kraken, it can be hard to stay aware of your surroundings. You or your crew will need to keep going below deck to repair any damage that the Kraken has caused. Its tentacles are as powerful as cannonballs and can break multiple holes in your ship from a single attack. If you don’t stay on top of the damage, you will be dragged under in no time.

At times, the Kraken will wrap a tentacle around your ship, dealing massive damage to it. If you don’t act fast, it will drag you and your ship down into the ocean in a few short seconds. Grab your sword, your gun — whatever you can — and hack at the tentacle until it uncurls itself, allowing you to keep the fight going for a little while longer.

What do you get for beating the Kraken?

Each tentacle will drop some loot after it is defeated, along with one piece of Kraken meat. Kraken meat can be cooked and eaten for a health boost, but they are more useful for trading at a Hunter’s Call trading post. Dropping your anchor at the beginning of the battle will make it easier to grab the loot; the murky water will slow you to a crawl anyway, so movement won’t be that important.