League’s very own Radiant Dawn brings the very sundown on her enemies, renowned for her insane engage potential mixed with consistently significant damage for a support character. With an increasing amount of counter picks in the meta, however, how do Leona players continue their absolute domination of the bottom lane?

For a champion whose identity is literally diving into the enemy team and crowd controlling as many opponents as possible, Aftershock is the way to go. Adding tankiness to what is already provided by Leona’s W – Eclipse, the rune lends a lot of strength to an already irritatingly hard to kill champion in the bottom lane.

Similar to the rationale behind Aftershock, many players opt for an early Gargoyle’s Stoneplate on Leona now. The sheer damage mitigation plus statistics gain – all at a relatively affordable gold count – means that this is the way to go for everyone’s favorite engage champion. 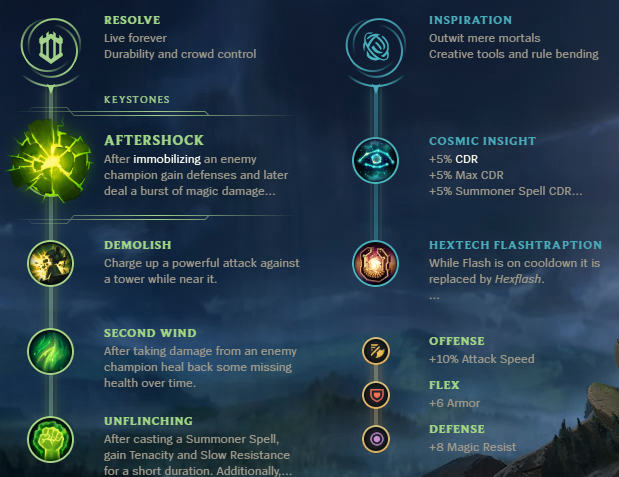 W – Eclipse is Leona’s main identity. Free stats from pressing a single button seems absurd, and the damage offered by the ability is certainly nothing to disregard, either. Afterwards, feel free to max your E for more consistent engages.

Leona’s E – Zenith Blade pulls her to a target, briefly snaring them and often lining her up to land every single subsequent ability. The attack results in one of the most devastating chain crowd-control sequences in any video game, prompting opponents to take Cleanse or something to deal with her utility (Quicksilver Sash).

Some champions have answers naturally available, however, often resulting in inconveniences like Morgana’s E – Black Shield, or any part of Thresh’s kit. To counteract this, and limit just how the opponent can respond, I recommend engaging with E and then waiting for them to commit their defensive abilities–allowing for them to time out before following up with the rest of your combo.

Leona’s R – Solar Flare has a range from one screen away, being a near on-demand stun if opponents are locked down in the center of it. The Solar Flare engage then gives Leona and her allies the chance to follow up with more crowd control and damage, and as such, the opponent is often forced to Flash out of it. However, Leona will get at least three chances to use Solar Flare in the early game before the enemy’s Flash is back up. Take advantage of the relatively immobile champions plaguing the middle lane right now (Ryze, Cassiopeia), and aggressively fish for picks with Solar Flare.

The Leona trick that takes the longest to get the hang of is using the Flash Summoner Spell midway through your E’s cast.

The Flash Summoner Spell will artificially increase the range of your E, allowing those mentioned above subsequent crowd-control combination to come out, with little time for a response from the enemy.

CD Projekt Red claims Cyberpunk 2077 ‘made it difficult for ourselves,’ next- gen version coming in late 2021