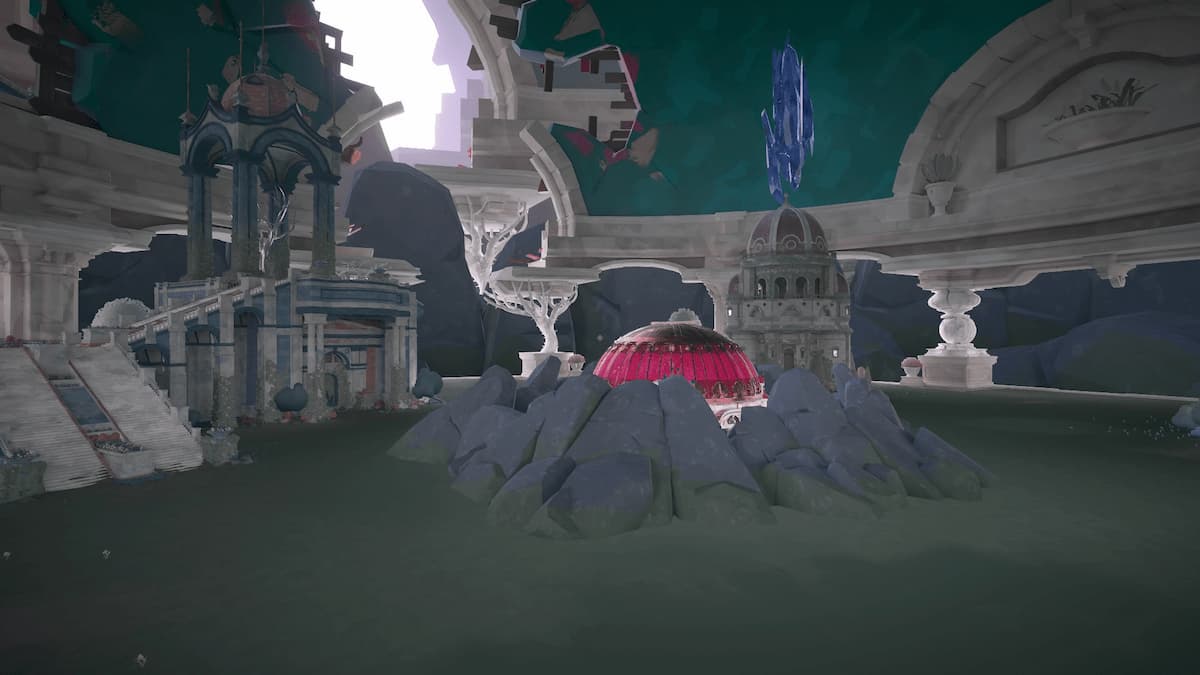 The Exchange is the final chapter in Maquette, and it puts to test your problem solving skills to figure how to make it across a massive open field in little to no time at all. It all takes place inside the area you start the level.

When you start The Exchange, you’ll be standing in front of a palace that has pushed through the rock and broken through. The palace is stuck between the rock formations. You want to approach the palace, interact with it, and then pull it up from the ground around the rock formation. When you do this, the rocks will disappear, and the rocks surrounding the building you’re standing in will disappear.

The structures inside the building are the ones you walk into outside. You want to approach the large tower with a staircase. Walk up to the top of the tower, and interact with the switch at the top. There will be a brief cutscene, and then you need to return to the palace you started.

The next building you want to enter will have several pillars around the entrance. There are also several blue butterflies floating around the front to make it stand out from the rest.

There will be a blue owl floating at the center of the interior. Interact with it, and numerous structures will appear outside the entrance, and a switch will rise at the door.

A tower will appear on the other side of the map after leaving the building with the blue crystal. You need to go inside the palace and interact with the miniature tower construct. When you stand in front of the tower, make sure to stand on the pedestal in front of it, causing the glowing rocks to appear to show you the proper order you need to swap the tower’s stones.

Here is the order from top to bottom.

Here is the order from top to bottom for the second tower.

Another tower will open. Like the last building, it will also have blue butterflies floating around it, indicating where you need to progress. Inside the building will be a blue, transparent bell you need to interact with, and then return outside. A rock will appear in the field.

The next will have blue butterflies in front of it, Proceed inside the building, and the sketchbook at the top of the stairs is your next objective.

You can’t run up the stairs. Instead, you need to go back outside to the palace, pick it up, and place it on the rock outside of the building so it rests at a jarring 45-degree angle. That’s the only way to walk up the stairs to interact with the sketchbook.

The final task you need to do is walk across the field, walk up the first building you used at the start of the game and make it to the top.