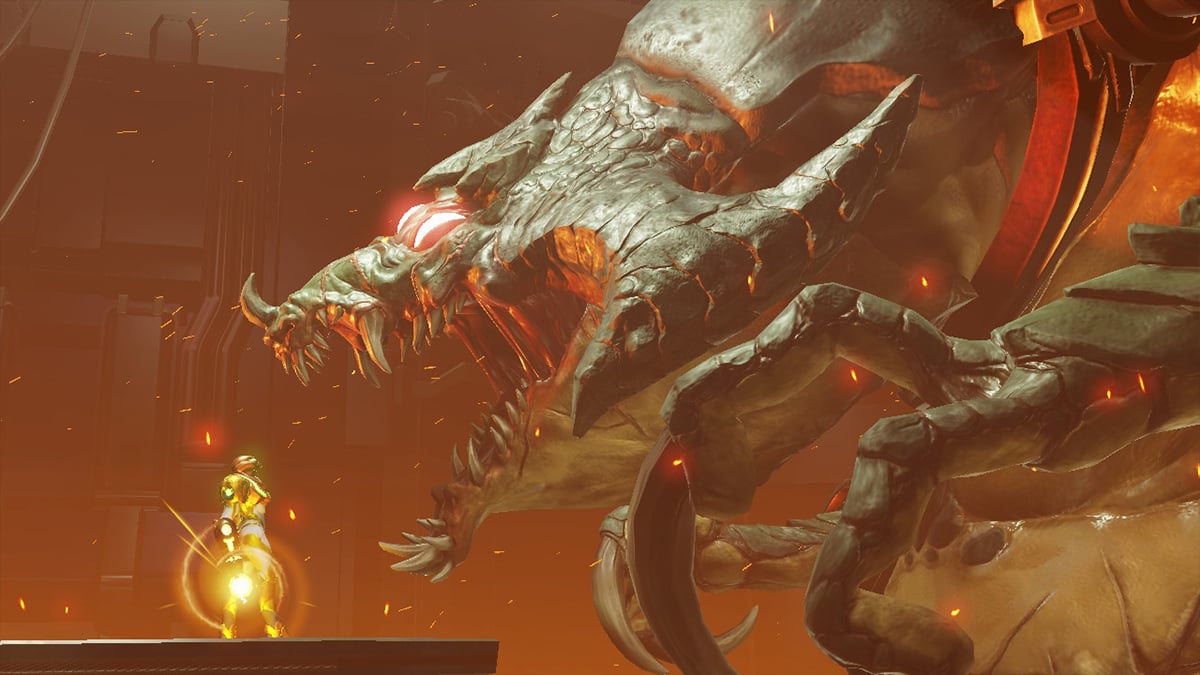 There’s no shortage of foes for Samus Aran to face in Metroid Droid. Planet ZDR is patrolled by the deadly EMMI and monsters native to the world, like Corpius. One of her longtime rivals, the Space Pirate Kraid, also makes an appearance.

You’re going to want to know how to beat him. When Kraid shows up in Cataris, he’s chained above a pool of lava — but that doesn’t make him any less powerful. Here’s the best way to take him down.

For the first phase, you’ll be face to face with Kraid (well, as much as you can be, given his enormous size compared to Samus). The important thing to know here is that you can only damage him by shooting Missiles or Charge Beams into his open mouth — you can goad him into opening it with a few shots to the face if need be.

Kraid has a few attacks during phase one. First, he may fire his claws across the screen: those from his left hand move in a straight line toward you, while those from his right hand are flung in an arc. Jump over the former; move side to side to dodge the latter. Kraid may also spew larvae and fireballs at you. The larvae can be shot out of the air for health and Missile ammo, but fireballs must be dodged.

After enough damage is dealt, the battle will move to phase two, and you’ll find yourself on a lower platform, facing Kraid’s three navels (yuck). Focus on dealing damage by any means to the purple one in the center. That’s where he’ll primarily attack from. He’ll shoot more larvae, which bounce in varying patterns. Again, they can be destroyed for ammo and health, but be aware of the different ways they move. If the purple belly button starts spurting juice, he’s about to fire a burst of purple goo, which will splash to the sides when it hits the platform — jump to avoid this. He can also fire bone spears from any of the three navels, but these are pretty easy to dodge. The lowest one poses the main threat, but you can duck under it as it flies by.

Once you hurt his purple navel enough, Kraid will clutch his gut in pain. Soon after, a Spider Magnet lift will lower toward you. Ride it back up to his head to deal real damage to his open mouth again. He’ll throw claws to knock you back down while you’re up there, so be prepared to do this loop a few times. You can shoot the claws out of the air with Missiles if you have the ammo.

Keep up the attack, and Kraid will eventually go down for good as Samus sends him sinking into the lava. With Kraid gone, you can proceed forward toward a new ability, the Diffusion Beam.