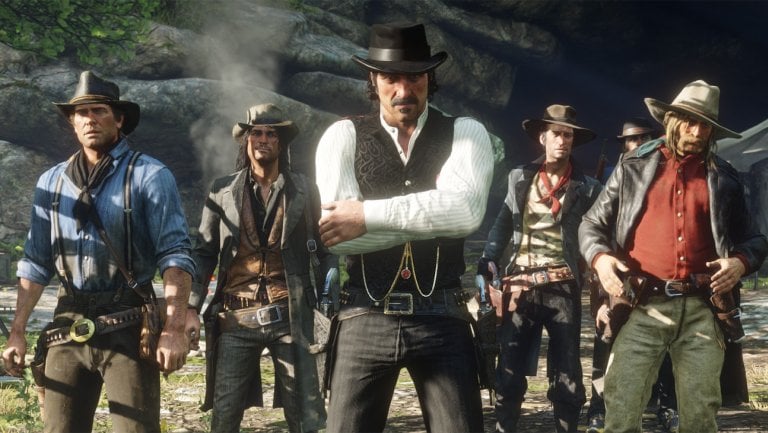 All Hallows Eve will soon be upon us, and for the past couple of weeks, cowboys and cowgirls have been speculating about what kind of goodies Rockstar would have in store for us in Red Dead Online. Would the Legendary Bounties have us chasing down the vampire that stalks Saint-Denis? Would we go deeper into the swamps to hunt some mad religious cult? Or would we be sent into the mountains to bring in the kind of cannibal tribe that would spend the entire time trying to eat our heads? Well, sadly, the answer to all three of those questions is a big, fat, no.

There is nothing even remotely spooky or pants soiling about this week’s Legendary Bounty. It seems that Rockstar may have shot their bolt-on that front last week with the excellent, if somewhat trippy, Philip Carlier. Instead, this week, we find ourselves tasked with bringing in a corrupt politician by the name of Tobin Winfield.

Still, these bounties won’t solve themselves, and even though it’s a tad disappointing not to hunt Bigfoot, the following guide details to you all you need to know about this rapscallion.

Spoilers Ahead If You Haven’t Completed This Yet

Tobin Winfield is a corrupt politician who has absconded with a load of deeds that don’t belong to him. He bribed his way into office, took kickbacks from everyone, and when the kitchen became too hot, he stole everything that wasn’t nailed down. After all that, he headed over to Thieves Landing, looking for protection.

You’re going to find yourself deposited at the start of the mission, and all you have to do is track Tobin Winfield via the usual eagle eye and inspection of clues. It won’t be too long before you find him cowering behind some boxes in a camp, very happy to see you. He got double-crossed by the men who helped him, and now they’re out for blood.

He promises that he’ll return the deeds and turn himself in as long as you help him live another day. Now, the bounty begins.

Well, it’s not so much taking him down as he, seemingly, is quite willing to fall under your protection. It’s more of a case of getting Tobin Winfield to detail where he’s hidden the deeds and keeping him in one piece. He’ll head out of Thieves Landing on his horse while you tag along behind. Along the way, you’ll be attacked by outlaws on a bridge, but you should ignore killing these for now because Tobin bolts and is suddenly set upon by a ton of bad guys from all sides. You need to keep him alive, so focus on the men on horseback and the ones in the wagon before you worry about any stragglers on foot. It’s quite easy to lose focus here because everything seems to happen all at once, but keep your eyes on the prize. Tobin Winfield should be able to hide safely behind a nearby tree while you pick off his attackers. When everyone is dead, you’ll continue on your journey.

You’ll eventually happen upon the place where he’s hidden the deeds. When you approach the rock he hid the deeds under you’re going to get ambushed yet again. This fight is a lot more complicated than the first one due to how little room you have to maneuver. It can be challenging to pick up where the enemies are coming from in the area. There’s little to no cover for you to hide behind, so your best bet is to keep moving. You should be able to deal with each wave that comes at you.

This time, when every bad guy is face down in the dirt, you’ll be told to pick up the deeds and that Tobin Winfield is quite ready to face justice for his crimes.

Tobin Winfield is far from ready to face justice for his crimes, which you will discover as you both ride off to the nearest jail. As you lead the way, Tobin will take a chance and make a break for freedom, which means you’ll have to chase him down and lasso him. I’m not sure if you can tie him up when this part starts as I was stupid enough to take a politician at his word, but if you can then do, because when he does do the proverbial runner, you’ll catch him and instantly find yourself in yet another ambush.

The hard part here is that because you’re taking him to Armadillo when the outlaw’s in question do catch up with you. There’s nowhere to hide, and you’re going to have to fight them on the plains while they attack from all directions. I lost a life here, but you can do it if you keep moving. Take out the riders first and then pick off those on foot, or else you’re going to have a bad time.

With these folks dispatched, you’ll have a nice quiet ride into town, only having to press the prompt button every so often when Tobin Winfield starts running his mouth. And who hasn’t dreamt of punching a corrupt politician in the face now and then?

Drop him off at the jail and collect your earnings, and that’s all she wrote for Tobin Winfield.

I’m not going to lie. I convinced myself this week’s Legendary Bounty was going to be Halloween themed, and to find out it was like any other, honestly annoyed me. I was so sure that we’d get something sufficiently freaky and out there, especially after last week’s entry. When it became evident to me that Rockstar wasn’t going to go down that path, I almost didn’t bother to complete it.

I’m glad I did it, though. The Tobin Winfield bounty was a lot of funny and a nice spin on what we’ve seen in this department. The fact that he’s approachable lulls you into a false sense of security and the constant ambushes, though they could become a little grating. If this happened for every bounty, you’d consistently be on your toes.

It’s an enjoyable way to spend about 30 minutes of your life, but I’m still displeased there were zero horror elements involved. Still, there’s a couple of days to go to Halloween, so who knows what Rockstar has up their sleeve.