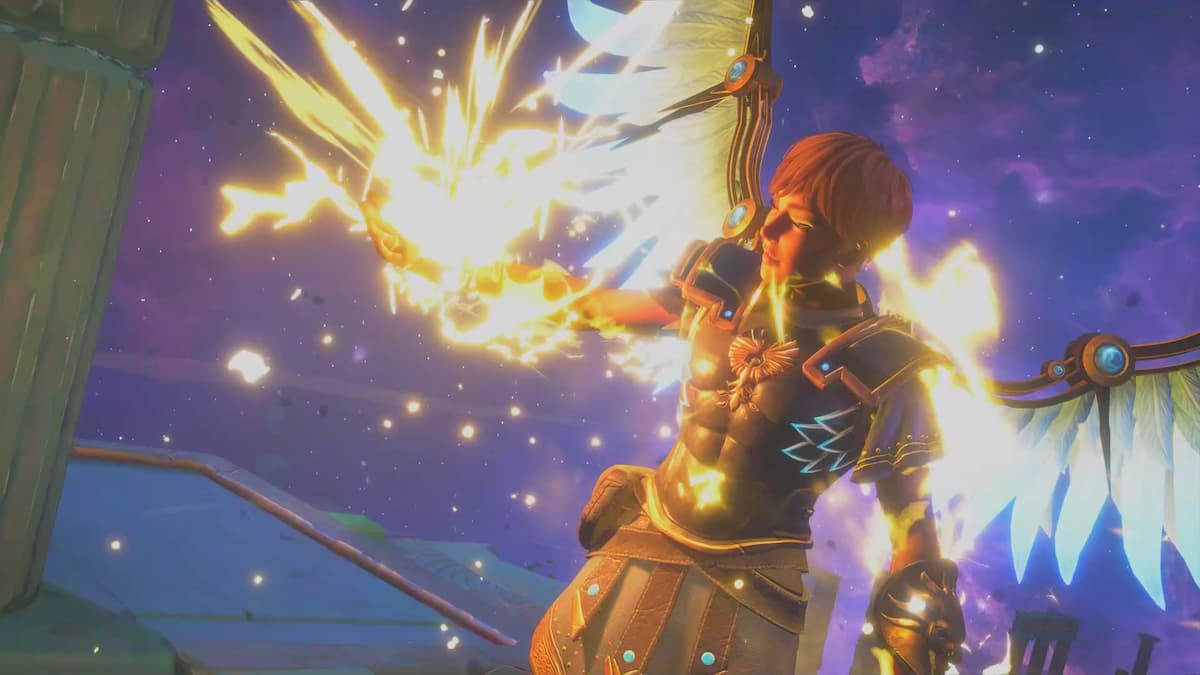 Apart from several challenges and quests, the world of Immortal Fenyx Rising is filled with many vaults. There are two types of vaults in the game, normal and godly. Godly vaults are far more challenging and contain godly essence. After Ares’ essence is stolen from the godly vault, Fenyx sets out to catch the thief; however, it first needs to find Typhon’s tribute melody.

One of the ways to avoid these spikes is by double jumping and flying over them. Alternatively, you should wait until the spike disappears again if you wish to avoid flying. The best way to know when the spike will pop out is by looking at the holes themselves — when they flash yellow, the spikes are about to come out.

While the first platform can be easily surpassed, the consecutive ones have projectiles near them and deal a ton of damage. On these platforms, you have to be really fast, and flying over it is the easiest way to get past it. Once again, make sure you don’t land on the holes when they flash yellow as they indicate that the spikes are about to come out.

Considering the nature of the vault, stamina plays a crucial role here. You should ensure that you have upgraded your Stamina bar since both sprinting and double jumping consumes stamina, and this vault requires a lot of both. You can upgrade your Stamina bar by visiting the Bench of Zeus in the Hall of Gods and using Zeus’ lightning. Alternatively, if you don’t have enough Zeus’ lightning, you can equip certain gear like the Valor of the Solider breastplate that gives you extra Stamina bars.

After getting past the first few platforms, a couple of shielded enemies will show up. Shielded enemies can be quite tricky to beat since they are pretty much immune to sword attacks. The best way to take them out is by using your ax attacks to break their guard and quickly landing a few sword attacks to whittle down their HP.

After you have defeated the enemies, you will see a golden circular platform with a helmet engraved on it. Stand on it, and two pillars will lower in front of you. You can go via either of these pillars, and you’ll end up reaching the same place. In fact, the sides are more or less symmetrical, so it doesn’t make much difference. The only difference is that the enemies on the left side are a tad bit tougher than the ones on the right.

Irrespective of whichever way you go, after getting past a few spikes and projectiles, you will encounter a few enemies. If you choose the right side, three unshielded enemies, with one of them equipped with a hammer. A useful skill for defeating these enemies is the Axe Smash as not only does it deal a ton of damage, it knocks out enemies as well, giving you some space to reposition yourself.

If you end up going to the left side, you will encounter a significantly tougher enemy. It summons three more enemies and is completely shielded itself. Hitting it is practically useless since it barely deals any damage. You need to take out the enemies he has summoned first, which will take down its shield. Once that’s done, it will get stunned, and you can defeat it with your sword attacks. An easy way to take out these enemies is by making a perfect dodge. It slows time and gives you enough space to take out the summoned enemies.

After taking out these enemies, you will see another golden circular platform in front of you. Simply stand on it until another platform comes to you from the front. Once the platform is near enough, jump on it, and it will take you forward. Go past a few more spikes, and you will reach a large area. At the center, you will find a tube-like structure that is half transparent.

Obtaining the first fragment and defeating the beast

Right in front of it will be a blue-colored broken piece. Pick it up using Herakles Strength, which can be activated using the middle-mouse button (Triangle/Y on the controller), and then press the E key (RT/R2 on the controller) to throw it towards the tube-like structure in the center. It will automatically get aligned and attach itself to it. A beast will appear when you throw it, and you need to defeat it to get the second piece.

Defeating the beast is quite easy. It has a pounce attack that can be difficult to avoid, but you can see when it is about to use that since it flashes red before making that move. Do note that this attack cannot be parried, so dodging is the only way to avoid it. An easy way to avoid it is to dodge towards him when he pounces. He also has a slash attack, and to avoid that, you can dodge in the opposite direction. Finally, the charge attack, which cannot be parried, can be avoided by dodging sideways. If you time your dodge right and get a perfect dodge, time slows down, and it will allow you to land many hits. This should help you take him down in no time.

Getting the Brood of Typhon Breastplate

Before we get the second piece and get out of the Vault, there is a chest in the Vault. To get the chest, simply go behind the wall with a red-eye symbol near the green lamp. You will see a couple of platforms in front of you. Hop onto one and then fly forward to reach another platform at the far bottom. You will reach a platform with a chest that contains the Brood of Typhon Breastplate. While it might not be the best armor in terms of perks, it is definitely one of the best looking ones.

After grabbing the armor, stand on the golden circular platform to make four platforms align together. Keep standing on it until they form a straight path, and quickly jump on them and on to the next vertical moving platform to get back to the large area once again.

If you have already defeated the beast, you will see that at the farther end of the area, there is another platform with the second piece of Typhon’s tribute melody. Pick it up and throw it towards the tube-like structure in the center to complete Typhon’s tribute. Once you have done that, the platform which had the second piece will start moving vertically. Hop onto it, and you will reach another platform. Go forward and collect Zeus’ lightning to come out of the Vault. If you have collected the chest, the Vault will be closed, and you won’t be able to visit it again.