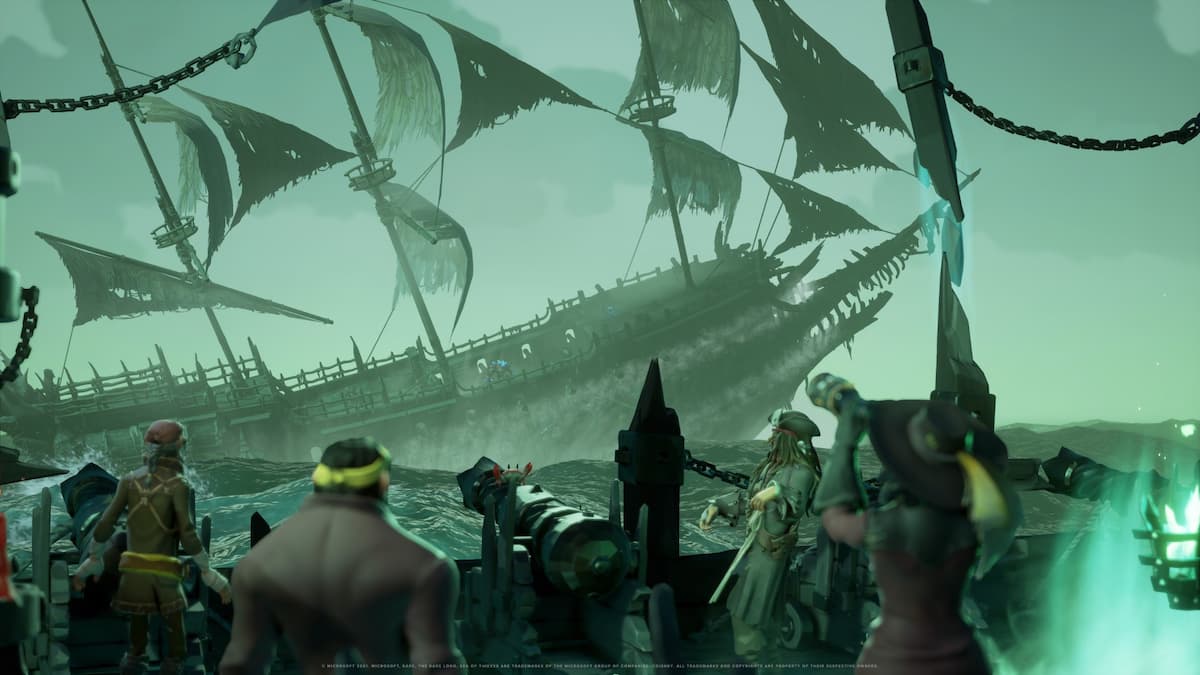 The pieces have been set for the final confrontation against Davy Jones and the Dark Brethren. Lords of the Sea is the last Tall Tale of the Sea of Thieves: A Pirate’s Life expansion, and it’s certainly the most action-packed and cinematic one of them all. Start up the Tall Tale at the Castaway’s Camp for some final exposition from the Pirates of the Caribbean characters.

Unlike the previous Tall Tales in A Pirate’s Life, most of Lords of the Sea will involve combat from your ship, so you will want to supply up with cannonballs, fruit, and wood, as Jack recommends. Once the Tall Tale begins, there will be a giant, menacing Davy Jones-shaped cloud in the sky that you must sail towards. This journey will take you off the map, and you’ll be greeted by a swarm of ghost ships surrounding a large spire. Davy Jones will taunt you, and you’ll engage these ships in combat.

This battle is similar to basically any ghost ship world event, including Flameheart battles. It may be a difficult feat solo, but regardless of the size of your crew, you will have Jack Sparrow manning the cannons to help you out. Be on the lookout as you scuttle ghost ships, as they will drop Storage Crates of the Damned, carrying even more supplies for them to use. They will be marked by These ghost ships will take three hits each, and the next wave will begin after defeating a certain number of ships.

More ghost ships will spawn, and giant Siren Statues will emerge from the water. They will be surrounded by red bubbles, which will damage you if you sail too close. The red field will not protect them, however, so continuously shoot cannonballs at these large statues. Five cannonballs should completely destroy one.

Rise of the Black Pearl

After defeating enough ships and giant statues, another wave will begin. However, you’ll get another ally — the Black Pearl will emerge, although you will have one less hand on the cannons, as Jack will go back on his own ship. With the Black Pearl’s help, keep pelting the ghost ships and Siren Statues with cannonballs.

You can earn the Ancient Armada commendation by sinking 20 ghost ships, and the Sea of Silence commendation by destroying 10 Siren Statues. However, this will take you multiple playthroughs of this Tall Tale to reach those numbers.

Captains of the Damned

The next wave will begin with Davy Jones sending his Dark Brethren captains at you; these ships will take a lot more hits to sink. Luckily, you’ll receive extra help from the Captains of the Damned, which you may recognize from previous Tall Tales in the base Sea of Thieves game. Your ally ships will have a similar ghostly appearance, but their sails are solid instead of ragged and have emblems on them. Also be wary of Ocean Crawlers that will board your ship.

Defeat the Captain ships, and there will be another exchange of dialogue between Davy Jones and Calypso. Calypso will strike the Spire with lightning, and Jack Sparrow orders you to go up that Spire to hit Davy Jones where it hurts. Land near a strip of land, and then go up a path to the left.

You will see a number of ghost pirates, silently standing and holding candles. Follow this path while also finding some journals on the way. You will reach a wooden bridge, go up a mast bridge, and then do a platforming session that will need some sprint jumping to get across. Jump off a cliff to some wreckage on the left and keep navigating around the edge of the spire until you reach a ladder to jump to. Continue and watch your step; you’ll reach another ladder that goes up a mast.

There will be a brig to the right; go through, and then go to the right to slide down some shipwrecked remains into some water. Turn around to see another piece of shipwreck; make your way through and jump on top of boxes to reach the top deck, then turn and use the bow as a bridge. Continue onward and climb up a ladder to reach the last area of the Spire.

The Dead Man’s Chest and the ghost of Lord Beckett from the films will be at the end of the room. Davy Jones will summon Phantoms to fight you; fight them off and be sure to resupply through the barrels around you. Calypso will help from above by striking Phantoms with lightning. The last Phantom will drop the Dead Man’s Chest Key, which you will use to open the Dead Man’s Chest. Calypso will strike the contents with lightning and then urge you to jump out of the Spire. There is an opening at the wall, and you can sprint off a broken mast and back into the water, ideally next to your parked ship.

The last combat encounter will be against the Flying Dutchman. Treat this like you would any ship battle, but be wary of the Dutchman’s many cannons and a shockwave attack. While Davy Jones used this shockwave in the films to summon the Kraken, there will be no such Kraken attack during this fight. Also keep in mind that you cannot board the Flying Dutchman or even harpoon it. After you and your allied ships inflict enough damage, the Dutchman will sink.

After the Dutchman sinks, the Spire and all of your ally ships will submerge. The skies will clear, and then coming out of the water will be a fully restored Black Pearl with triumphant music. Sail towards the Pearl and park next to it. You can then board the Black Pearl and explore to find five journals. You will watch a scene of the Ferryman restoring Jack Sparrow’s corporeal form, and his crew will be ready to set sail. You can play with the ship’s wheel and cannons, but you obviously can’t drive this ship around.

Jack Sparrow will then ask you to leave his ship, and once you sail away, this Tall Tale and Sea of Thieves: A Pirate’s Life will conclude.