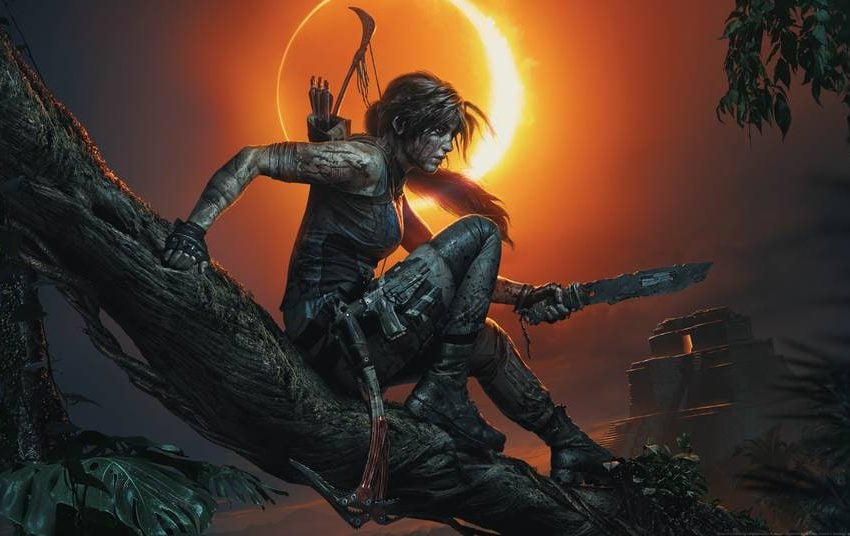 In the previous mission In The Shadows, Lara found a lead on ruins. In this chapter, Hunter’s Moon Lara decides to pass through the Dig site which is heavily guarded by Trinity. But first, you will have to come out of the cave, by making your way towards the ground. You will have to move quietly towards the exit of the Dig site. You will learn to take down guards in stealth mode.

Out of the cave play in stealth mode, use a throwable object to distract guards in your way. Don’t forget to loot guards for new weapons.

Enter the cave, and use Survival Instinct to scan down items around the area. Walk through the water and you use arrows to open up the blocked path. Here you will learn about Rope-Pulling. Shoot the white area of the wood and pull it to open up. Next hit the key that flashed on the screen to Scramble under obstructions. Look for a cave on the right. Once you are in an open area, use Survival instinct to scan for objects. You will also see the beacon that will lead you to the underwater entrance. Jump in the water and swim through the cave. You can swim up for breath where you see light. After swimming through the cave you will see a cutscene where Lara is attacked by an Eel and later she has to crawl between narrow rocks to go up. Press the flashing key on the screen to go on top.

Use Survival Instinct to locate the beacon, follow it and watch-out for a trap, go slow and you will hear a voice of spears coming out from the wall. Scramble to save yourself.

Get To The Top Of The Pyramid:

Walk right once you see the temple, jump over the hanging structure, it will star going down, jump on the other one. Before it goes down completely jump on your left to a similar platform with a bell in it. Use that to climb on the other side. You will be in a area lot of wood logs. Ahead you will reach stairs and ancient cart parked on the right. In front of the cart the way is blocked by logs, shoot the arrow and pull it to break. Next push the cart and it will lift a platform. Jump on it and look on the left side, and the jump ahead towards the broken ladder.

In between Trinity blast will shock you who are trying to make their way into the temple. You will learn about Tethering here, that will help you tie a rope on the other end of the post so that you can move ahead. Watch for the rope trap, and once again you will came across moving hanging platform that will god own as you jump on it. Jump through it fast towards left , on the other side walk towards the end and you will see a white rope attached to a wheel. When you move it, it will rotate the circular wooden platform.

Rotate the wheel to move the wooden platform on the ground so that the lines on it must be facing the cart on left. Push the cart on the platform and return back to the wheel control. Rotate it once again in a way the cart back side which has white ropes is in your direction. Then block the wheel with axe, and shoot rope arrow on the cart ropes and rotate the wheel again to pull the cart towards you. Cut the rope, the cart will move in speed crashing with a stone structure that will lift another one to move ahead. That’s your way to go up. Use the platform to jump on the broken rope ladder, cross the stairs and jump to climb up on the column. Hang and move to the right end and then rappel to go down.

Next, there will be a cutscene where Lara solves a puzzle and gets a dagger. After she pulls the dagger Jonah will inform her that Trinity guards are on their way. Follow the beacon, to open your path break the weak walls and you will be outside.

Get Through The Dig Site:

Hide in the plants around, and quietly pass the guard. You can use Survival Instinct to locate guars around. Wait for the stealth kill icon over the head before you attack. Climb from the left side of lift, and there will be another guard on the right. Walk through the plants to hide, now you using Survival Instinct will give you a extra feature. If you scan you will find guards in red and yellow, red one are those who are being watched. Killing them will raise a alert, and yellow are the isolated one. You have to target the guards in yellow in stealth. You will also learn you to distraction objects, in case the guard is not moving or under a radar, use the distraction to lure the guard. Once you kill the second guard you will get a bottle that you can aim and throw to create a distraction. These are throwable objects.

Use it to distract a one among two guards and then take them down one by one. After killing them follow the beacon by climbing over the walls that will take you to an area that is filled with guards. Looting guards will give you new weapons. Keep following the beacon and killing the guards quietly until you reach the next level of dig site where you will spot more guards. Scan properly guards on top of walls also. The main objective of this entire play area is to take down guards and pass through the dig site. You can use malatov also to kill multiple guards.

More guards will drop in which will trigger a gun fight. Switch to a rifle and shoot the red barrels around guards to cause a explosion. Also watchout for the explosives the guards will throw on you once you are spotted. You cannot hide in one place for a long time. Similar to dodging the traps in ruins use Scramble to dodge guards attack. The best way to clear the area is to shoot the red barrels the more there are the more massive the explosive will be. That will be a time saver.

Shooting guards will reward you XP and you will also earn Skill points. Loot the dead guards and follow the beacon. To break the gate lock use the axe. After passing through the second door there will be a cutscene where you will see Lara is captured.

After the cutscene, you will gain control of Lara, who is trying to escape from the Tsunami. Just avoid the debris in your path and navigate left/right.

After falling into the water swim faster to stay alive. You can use trapped air, look for the light swim up to get some air from a trapped air pocket. Break the door with the axe and follow the lights. Swim through the van and break the window. Just press the key prompts. Once you are out to swim to the left side, to reach higher ground.

Jump over the floating debris and keep moving forward. You will begin from a roof, then jump over a bus and then a floating sign board. Next a crane on your right, that will take you to another roof. There will be lot of moving debris and you have to be fast. You will reach a building on fire. Climb on the wall, go left, take the help of a hanging sign post to go up. Hang and keep moving through the wall edges to reach on the right wall, you will see a kid falling down. There is nothing you can do to save him. Go on the roof, and there will be a cutscene.

The chapter is over after the cutscene which ends into a tragedy. You can read our walkthrough on the third chapter Rough Landing which will take you to Peru. For more updates on the game do have a look on Shadow Of The Tomb Raider Wiki guide.