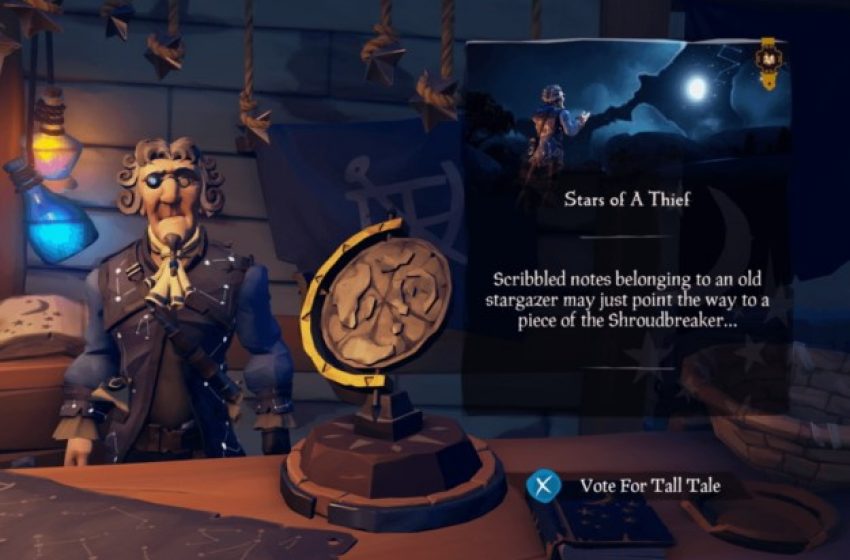 The Stars of a Thief Tall Tale in Sea of Thieves is a hefty questline for those who want to complete this epic journey. You can expect to work your way through it on your own or you can choose to take a small pirate crew with you. Here’s the break down for what you need to do. Before you can start this tale you need to have finished the Shroudbreaker Tall Tale.

Starting the Stars of a Thief

To begin your quest you need to visit The North Star Seapost and locate an NPC named Sudds. You can find him on map tile H10.

He has a Stars of a Thief Tale Tells on the right side of his countertop. Interact with it if you’re able to, and you can start the quest, adding it to your map. After accepting the quest Sudds starts to talk to you, speaking about how he assisted a friend named Briggsy and traveled the seas using the stars and the Enchanted Spyglass. While Sudds does not part with the one he has, there is another one you can seek.

After starting the quest and speaking to Sudds he provides you with an array of notes that direct to you one of two islands: Rum Runner Isle or Twin Groves. Unfortunately, it does not directly tell you which one you are looking to visit. It wants you to find them based on the stars, and the text provided. Here’s the text for each of the respective islands:

The location on Rum Runner Isle is fairly easy to find at H9. You’re looking for a lantern hanging in the middle of a palm tree. Dig underneath where is the lantern is hanging, and you’re good to go.

Twin Groves is a larger island found at H11, and you’re looking for two large rocks on the north side of the island. You want to dig between them and find the Enchanted Spyglass.

Your Enchanted Spyglass is now available on your radial menu. Equip it, and you can look above yourself to see any of the constellations in the sky when its night or day. The ones you want to locate are brighter than the traditional ones you might see at night.

The stories inside of the Tale Tell associate with the different constellations in the sky, and they serve as directions to follow on your compass.

The possible stories include:

Now that you have the jewel, you need to place it in the ancient statue found at N13. Proceed to this location on the map, and you’ll find nothing on the surface of the water. You and your crew need to dive down to the depths of the ancient ruins. You can find the entrance closer to the west side of the map tile.

After you place the star jewel a totem reveals itself. The totem varies on where you need to go next.

The location for the Boar totem is at Devil’s Ridge, which you can find at position P19. Once you’re on the island, go to the southeast corner of it and look for cave drawings of boars painted on rocks. To the left of those is the totem lock.

For those who obtained the Crab totem, you won’t have to go far. From where you’re standing at the ancient statue, turn around and you should see a series of crab paintings on the wall. Look to your left to find the totem lock.

If you grabbed the Moon Totem you need to make your way to Crescent Isle found on map tile B9. When you reach this island, you want to go to the center of the island, closer to the north side. You’re looking for a cave, and once inside, look to the right where you should see small moon drawings on the wall. Below those is the totem lock.

The Scarab Totem wants you to go to Crook’s Hollow, which you can find in the middle of map tile M16 and N16. Once on the island, go to the east side of it, at the middle, look for a cave that has a waterfall flowing over its entrance. Inside, locate the Scarab paintings on the wall, and look for the totem lock on the south side.

The final totem option is the Shark Totem and it wants you to go to Kraken’s Fall, found at R12 and R13. Once there, go to the center of the island on the north side. Look for the totem lock underneath the main arch, to the right of the palm trees.

Once you have activated the totem you were given you will have opened the entryway to the ancient vault. From here, you need to solve the riddles to open the vault and gain access to its treasures. Do not light any of the fires yet, because once you do the room will start to fill with water and you have a limited amount of time to finish the puzzle. Make sure you’re ready before proceeding. If you fail the puzzle and drown during this attempt you have to start over from the beginning.

When you’re inside of the puzzle there are four pillars you need to rotate to have in a correct sequence. The proper sequence is detailed on the Tale Tell page detailed “The Unsolved Story?” where a scrambled story breaks down what constellations you need to rotate the pillars, and have the correct order. There are six potential sequences, each with two different patterns. The first pillar is the one to the left of the room, going to the right. After you switch all of the pillars in the room to their proper placement click the button in the center of the room to confirm your choice.

After you enter the proper sequence into the pillars the doors open and the Shroudbreak stone is beyond you. Obtain the stone, and you can return to your ship.

Return the Shroudbreaker Stone to Sudds

You now need to return to Sudds with the Shroudbreaker stone. You can find him waiting for you at the North Star Seapost, which is on map tile H10. After speaking to Sudds you will receive the Stone of the Heavens and the Stars of a Thief commendation.