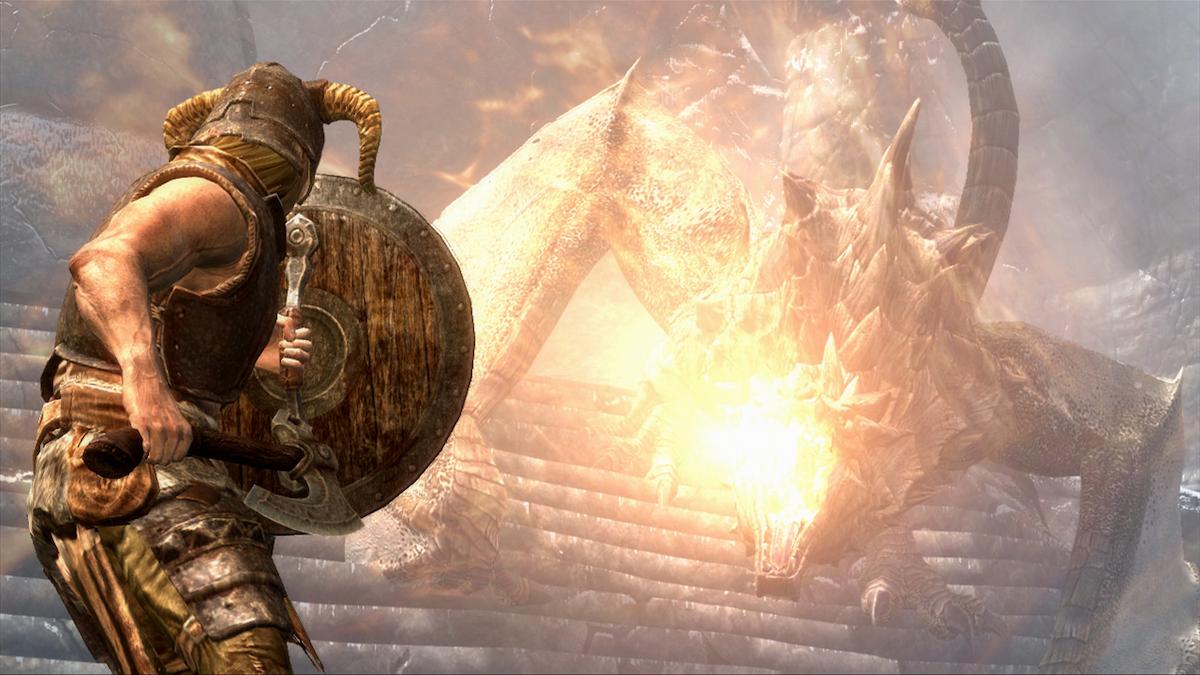 It’s almost impossible to avoid experiencing Skyrim these days. The fifth Elder Scrolls game has been released on so many platforms and in so many different iterations that it’s close to becoming the new metric by which we judge any electronic system — forget “Can it run Doom?”, the real question is “Can it run Skyrim?”

As might be expected, there are plenty of folks who have whiled away countless hours wandering the frozen north of Tamriel, getting in fist fights with Frost Trolls and gleefully shouting goats off cliffs. Some have even wanted to immortalize their experiences on their own skin, with a meaningful tattoo of some key aspect of the game. If that’s something you’re considering, here are a few ideas to get the creative juices percolating.

An arrow to your knee

It’s the single most recognizable meme in all of Skyrim, and arguably across all of video games now that “the cake is a lie” has lost favor. In tribute to the apparent legions of guards who used to be adventurers like you until they took an arrow to the knee — a small but hilarious glitch in the randomized bits of dialog with which NPCs would greet the Dragonborn — several fans have indeed etched the offending arrow into their own knee. It’s a pretty funny gag, well suited to someone who can see the lighter side of getting a tattoo and wants to immortalize one of gaming’s most notorious memes.

In contrast to the Companions, the College’s logo can be found everywhere in Winterhold. From the windows, to the books, to the floors themselves, the all-seeing eye is always watching the College’s denizens, hungry for knowledge and power. It’s certainly a bit more of an unsettling design — especially considering the events of the College’s questline, with the Eye of Magnus and the Psijic Order — but it’s undeniably cool-looking, and certainly something of a conversation piece if you’re so inclined.

It’s not all logos and insignias in Skyrim, of course. There is a host of creatively-designed flora and fauna to dazzle players with, including several summonable beasts. Among these summons from the planes of Oblivion is the Flame Atronach, a tall and perennially aflame demon that can hurl fireballs at its foes. This is definitely a more in-depth tattoo idea — a far cry from the Winterhold insignia — but as many folks on Pinterest have proven, it’s a solid design for an elaborate sleeve or something similar.

Learning and weaponizing the Unrelenting Force shout is undoubtedly one of the most iconic parts of Skyrim. If you haven’t spent a merry afternoon yeeting bandits off the top of waterfalls using nothing but the power of your own voice, you’re missing out. On top of that, it serves a meaningful function in the story, too — it’s the first Word of Power you learn in the game, and if you follow along with the main story quests, it’s likely to be the first Shout you’ll fully unlock as well. That perfectly encapsulates the feeling of empowerment over the course of the game that so many players find so intoxicating, and the gradual transformation from hapless, mostly-nude prisoner to towering, immortal Dragonborn.

The diamond-shaped dragon emblem has become synonymous with Skyrim, so it’s the perfect choice for someone wishing to emblazon themselves with a memento of the game. The general shape is pretty easy to fit anywhere on your body, but there’s a pleasing amount of detail to go into if you’re so inclined.

The logo depicts Akatosh, one of the Divines who is also the God of Time, and whose pact with St Alessia not only led to the establishment of the Empire of Cyrodiil but also directly links to the events of The Elder Scrolls IV: Oblivion and The Elder Scrolls V: Skyrim. As such, it’s become inextricably linked with the Empire and the Imperial Legion, who you see a lot of throughout the Civil War questline in Skyrim. If the Empire isn’t so much your bag, though, there are other options.

So you don’t want to side with those snooty imperialists. Fair enough, and if dragons aren’t your thing anyway, there’s always the strong and powerful bear of the Stormcloaks to etch upon your skin. Skyrim yearns for its independence, and the roaring ursine maw of this cute little fellow will strike fear into the hearts of anyone who runs afoul of it. The design can work well for a tattoo as just a black outline, but for a real dose of authenticity, it’s nice to go for the traditional colors of blue and white.

The player’s first interaction with the Dark Brotherhood is one of the most memorable parts of the game. After offing a cruel orphanage owner, you’re handed a note that simply has a black handprint and the words “We Know” inscribed on it. The subsequent quest chain, which sees you bringing the Dark Brotherhood, now a shell of its old self, back to its former glory, is filled with twists and turns and remains the favorite of many a Dovahkiin. A Black Hand tattoo, with its simple design and menacing, monosyllabic warning, is a great tribute to a great questline. Just be careful where you get it on your body, lest you get some awkward questions.

You may not have seen this insignia that much in the game itself. Indeed, in and around Jorrvaskr and the various locales you’re tasked with visiting over the course of the Companions questline, you’ll probably not have seen much in the way of branding at all, save a few banners with an illustration of the ancient battleaxe Wuuthrad. Still, this icon represents many of the quests you’ll undertake for the Companions in your journal, and it’s hard to deny its badass design. The wolf howling at the moon represents the closely-guarded secret of the inner circle of the Companions, that they are cursed — or, according to some, blessed — with lycanthropy. If you’ve always considered yourself a bit of a feral beast, or even if you just still hold a candle for Farkas, this is an excellent design to consider.

OK, so he may not look exactly — or, indeed, at all — like your own personal Dovahkiin. Maybe you went with a different race, or prefer a different weapon, or realized that iron armor gets outclassed pretty early on. But this Dragonborn, with his horned helmet and steely glare, was the face of Skyrim for the game’s entire marketing push, and as a result, has become emblematic of the game as a whole. Even today he graces box art and fan’s work, the platonic ideal of the Dragonborn. The whole character could be a pretty in-depth tattoo project, or if you’re going for something a little simpler there’s always that iconic helmet.

The Thieves Guild has a host of designs to play with for an intrepid tattoo hunter. The most basic is arguably the general emblem for the guild, as depicted above — a circle within a slim diamond. But hunt around in Skyrim long enough and you’ll find a book titled “Shadowmarks” which lists several other drawings that the Guild uses to share messages secretly and silently. So if you wanted a slightly more detailed design representing “loot,” “danger,” or a “thieves cache,” this is where to start looking.