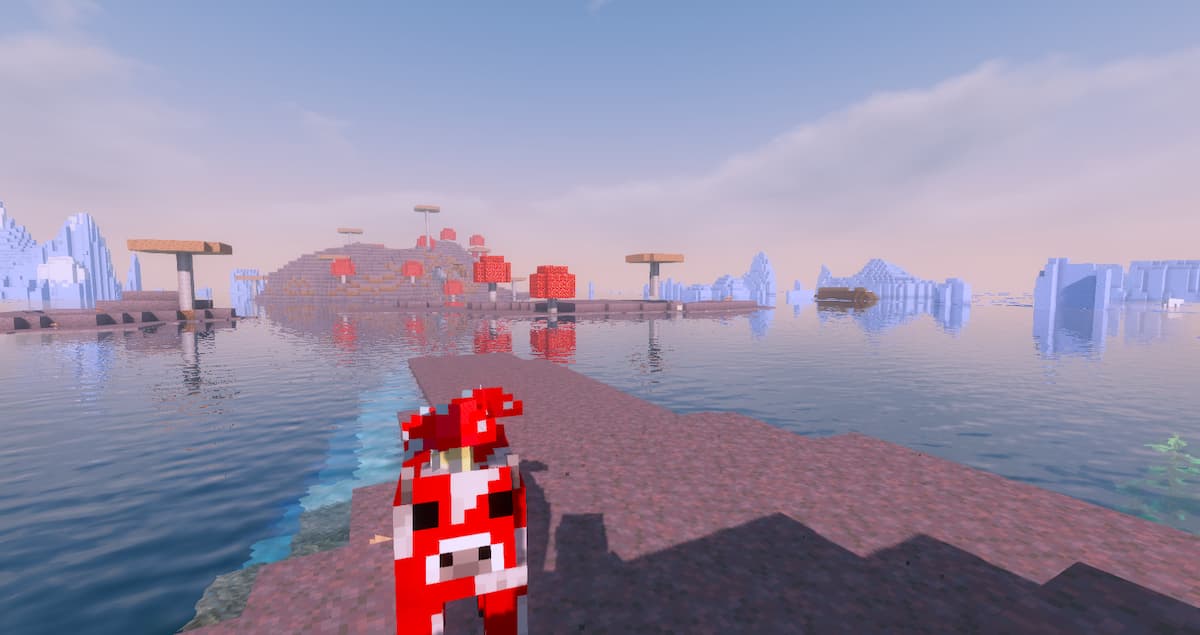 Minecraft is full of interesting biomes, but the most elusive of them all is the mushroom island. Mushroom biomes are famously difficult to find and are very interesting. Mobs won’t spawn on these “safe” islands, but they don’t have much in the way of resources. Here is our list of the ten best mushroom island seeds currently available in the latest version of Minecraft.

This beautiful seed spawns you on a small strip of plains across from a shipwreck and some mountains. If you turn around, you will find a large mushroom biome connected to it. This is a great survival seed to start on. The nearby shipwreck will have some valuable resources, and the mountains across the water are littered with caves for you to explore.

This is an interesting seed good for anyone that loves cold biomes. You spawn on a mushroom island directly across from some glaciers. Playing this seed in survival may be difficult since there aren’t any basic resources like wood near spawn. You have to go quite a ways before you finally find a tree.

This seed spawns you on a mushroom peninsula. If you head inland, you’ll eventually end up on a nice continent with space trees and wide-open spaces. If you go the opposite direction, you’ll find a winter wonderland with plenty of glaciers to explore.

This unique seed spawns you on a small chain of beautiful islands. If you do a complete 180 from spawn and start swimming, you will eventually hit a desert island with a large hill and the mushroom biome just beyond it. This is a great seed for players that want to make an aquatic base. The Island chain is a great starting off point, and there is a continent dead ahead of spawn with a lagoon and plenty of wood.

The mushroom island on this seed is a bit smaller than most of the others on this list. The seed is perfect for people who like cold biomes or want a bit of a challenge. The mushroom biome is in the middle of an ocean and surrounded by glaciers on all sides. There is a shipwreck nearby, but that is the only source of wood immediately available. When paired with hardcore mode and a mod like Survive, this seed is great for players looking for a challenge.

This seed spawns you on the gulf at the edge of a beautiful continent. To get to the mushroom biome, you need to do a 180 from where you spawn and cross the gulf or follow along the edge of the continent across the mountains. The biome is oblong and stretches quite a ways along the southern coast of the continent. If you head west from the mushroom biome, you’ll eventually hit a large mountain with a broken nether portal and chest on a plateau. This is a good world for SMP or just playing around in survival in general. It has a little of everything for everyone.

If you are a fan of Hermitcraft, this seed should look familiar. This is the same seed used by the Hermits in Hermitcraft Season VII.

You spawn on a small desert island with the mushroom island nearby. The mushroom island acts as a focal point for the rest of the map. A large lake surrounds it, with just about every other kind of biome running along the opposite edge. This is the perfect opportunity to explore the areas that will one day become Aque Town.

This is one of the largest mushroom islands on the map, a good seed for a mushroom megabase. The island has a few small desert structures and open caves for you to explore. There is also a fairly large archipelago nearby that the mycelium is trying to take over with plenty of resources for you to use.

For this seed, you have to teleport or walk your way to x -1500 z -1000. Doing so is well worth the trip, though, as you end up on a small island with a large village complete with docks. From the docks in the village, turn around and head past the trees. After swimming for a little while, you will hit a large mushroom island.

This seed is fairly similar to the previous one. You need to teleport or walk to -300 ~ -1350 to get to the island. You will end up in a small village at the end of an archipelago. Do some swimming and some island hopping towards the north, and you will quickly see a large mushroom island on your right. It is an oblong island with plenty of mooshrooms on it. This is a nice area to set up an ocean base and a villager trading hall.