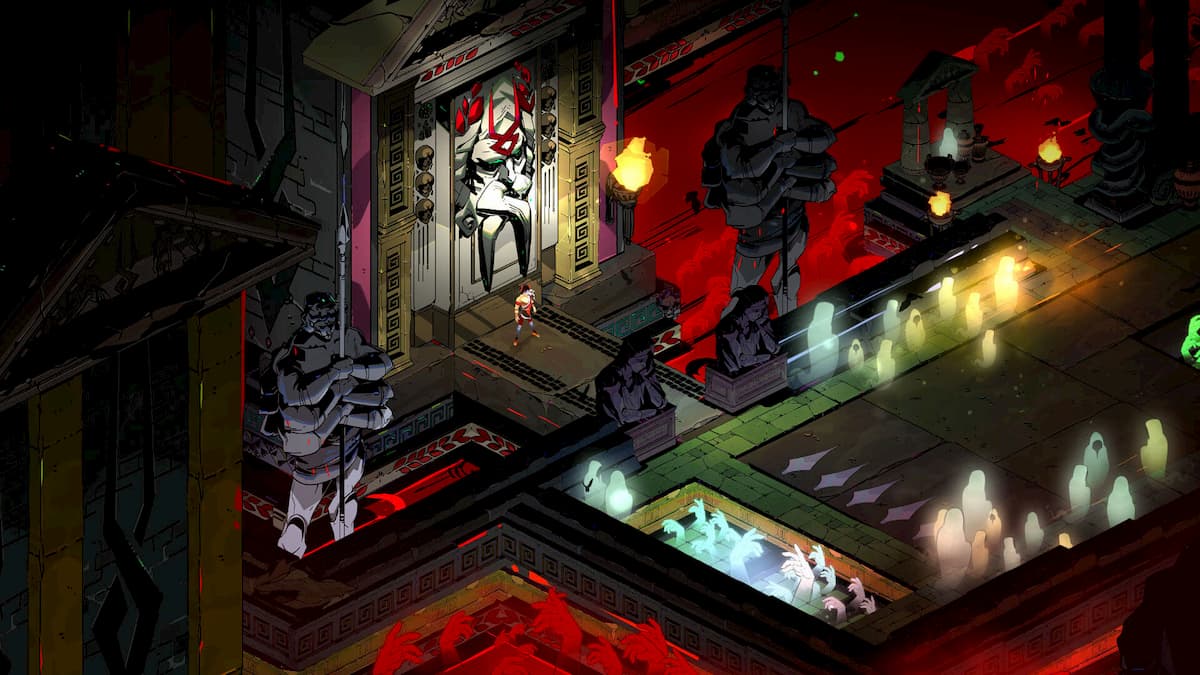 One of the reasons Hades has such a high replay value is how adaptable the gameplay can be. Between weapons, boons, and Mirror of Night perks, it is possible to create a weapon build for any playstyle that you want. If you get tired of using a high-damage melee build, you can switch to a tank or to a speed run build. There are also plenty of wacky builds to experiment with just to have some casual fun. Here is our list of weapon choices and weapon builds for some of the most common playstyles in Hades.

The Boiling Blood and Infernal Soul perks increase your Cast ammo and the amount of damage you do to enemies with a Bloodstone stuck in them. This works well with the Aspect of Hera letting you embed a Bloodstone with your normal attack like you would with Cast. If you are using the Aspect of Zagreus, you can combine these perks with Artemis’ Deadly Strike, True Shot, and Pressure Points boons to further boost your Critical damage.

The Aspect of Nemesis on the Stygian Blade gives you the potential to rack up huge amounts of damage. The aspect increases the critical chance by up to 30% after your special attack. Combine this with boons from Artemis and Ares to increase your overall damage. Artemis’ boons further increase your critical chance and give you a ton of benefits for your Cast. Ares’ boons increase your damage, give your attacks the Doom effect, and allow you to create damaging Blade Rifts.

Combine Artemis boons with certain Mirror of Night perks to get huge critical bonuses and deal even more damage with Doom and Blade Rifts. Boiling Blood increases your attack and special damage to foes that have a Cast Bloodstone embedded in them. Infernal Soul increases the number of Bloodstones you can carry with each level. These perks for Cast work really well with Artemis’ True Shot boon, which gives you a critical chance and a homing effect.

Ares’ Curse of Agony, Curse of Pain, and Blade Dash will all give you the ability to inflict Doom damage on enemies. Blade Dash also allows you to create a damaging blade rift that can be really helpful when dealing with large numbers of opponents. Battle Rage and Urge to Kill further increases your damage, especially after you slay an opponent. If you can combine these boons with the increased Critical chances given by Artemis and Aspect of Nemesis, you can make short work of almost any enemy or boss.

The Adamant Rail is arguably the best AoE weapon in the game. The primary attack doesn’t do as much damage as the Heart-Seeking Bow, but it has a much higher fire rate. Where it really shines is with its Bombard special attack that launches a large grenade. The Aspect of Lucifer and the Aspect of Eris can really ramp up your damage and give big benefits to AoE attacks.

The Aspect of Eris allows you to deal up to 60% more damage after you absorb the blast from your special. The Aspect of Lucifer gives the weapon a new move set that includes Hellfire bombs. These bombs have a slightly smaller radius than the grenades, but they cause damage over time to nearby enemies and will explode when damaged. You can stack the bombs to create a huge explosion or spread them out across an arc to compound boon effects.

Both of these Aspects will benefit most from Dionysus and Demeter boons. Interestingly, the Aspect of Lucifer also benefits a lot from Zeus boons. Dionysus’ Drunken Flourish will slow and stun enemies in range of your special when it explodes. Demeter’s Mistral Dash sends a gust ahead of your dash that inflicts Chill on nearby enemies, slowing them down. Both of these when used with either Aspect will allow you to damage large numbers of enemies at once. If you can’t find either of these Gods while out exploring, boons from Aphrodite also work very well.

With the Aspect of Lucifer, Zeus’ Lightning Strike boon is actually a little broken. The Aspect already has a long-range beam attack that hits more frequently than the normal bullets. When combined with the chain lightning effect from Zeus, the Aspect creates several chains very frequently, causing huge amounts of damage.

The Adamant Rail can be further upgraded for AoE builds with a Hammer of Daedalus. Upgrade the rail with Rocket Bomb, Cluster Bomb, Hazard Bomb, or Targeting System to drastically increase your damage radius.

The Eternal Spear has the longest reach of any melee weapon, can double as a ranged weapon, and has a special with a very area of effect. The Aspect of Guan Yu is best for dealing AoE damage due to its Serpent Slash charged attack. If you haven’t earned the Aspect of Guan Yu yet, Aspect of Achilles is a very good alternative. The Serpent Slash attack allows you to send out a spinning blade that has a smaller radius than the normal charged attack but lasts longer and has a longer range. With the Aspect of Achilles, instead of recalling the spear to you after throwing it, you charge to wherever it lands, dealing more damage to any enemies in the way.

Combine the spear with boons from Dionysus, Aphrodite, and Poseidon to really ruin a Shade’s day. Dionysus’ boons slow and stun enemies giving you plenty of opportunities to deal more damage. Aphrodite’s boons inflict Weak, which makes them more susceptible to damage while also making their attacks weaker. Both of these effects pair very well together but do especially well with boons from Poseidon. Poseidon’s boons increase your damage, inflict Knockback, and cause damage over time to enemies as they move. Adding a Poseidon boon to any Aphrodite or Dionysus build will cause you to rack up a ton of damage across a very wide range.

You can further capitalize on these boons by upgrading your spear with a Hammer of Daedalus. If you are lucky enough to find a hammer, go for the Winged Serpent, Massive Spin, or Exploding Launcher upgrades to deal even more damage over a wider area.

The best weapon for players that want to set up high combo chains is the Twin Fists of Malphon. The basic attack of the Twin Fists is a combo of fast strikes that do low damage. All of the weapon’s attacks, including the dash special, can be chained together. The Aspect of Demeter really capitalizes on these combos by causing your special to hit a few more times after you chain together 12 strikes. The Aspect of Talos changes the special into a magnetic attack that pulls in enemies that are out of your reach.

Zeus’ boons will grant you chain lightning effects that will be useful for dealing with large groups of enemies, or enemies that are just out of reach of your attack. His boons can also curse enemies with the Jolted effect that will cause them to discharge lightning after a few seconds.

Boons from Artemis are designed to increase critical chance and damage. This works great for taking down tougher enemies with the bug-bite like attacks of the Twin Fists. These boons also increase the damage and usefulness of Cast attacks that can further increase combo damage from Mirror of Night perks.

Is it really any surprise that Aegis is the best tank weapon? Start this build by combining the Aspect of Zagreus or the Aspect of Beowulf with perks like Death Defiance, Thick Skin, and Dark regeneration from the Mirror of Night. This combination gives you a very high base HP that can be regenerated very easily. Death Defiance will also bring you back to life should you have any mishaps.

The Aspect of Zagreus reduces damage by 10% when fully leveled, which is a nice extra addition to the defensive abilities of the shield. The Aspect of Beowulf actually increases the damage you take, but when you use Cast, you will gain a three-second Sturdy buff that prevents your next action from being interrupted and lowers the damage you take by 30%.

Once you are in the dungeon, focus on getting boons from Athena. All of Athena’s boons either grant you the Deflect ability to send opponents attacks back at them or lower the amount of damage you take from enemies and the environment. Some of her boons also increase the amount of health restored by Death Defiance.

Boons from Aphrodite should also be added to a tank build when they are available. Almost all of Aphrodite’s boons can easily inflict Weak on enemies, lowering their damage output. Aphrodite also has a boon that increases the amount of health restored from rewards.

The Stygian Blade with the Aspect of Zagreus is best for players that want to get in more attacks rather than have a high base damage output. This is the default weapon of the game, and when fully leveled it, provides a nice boost to your base speed and dash distance. Combine this aspect with boons from Hermes to further increase your speed and dash distance. With a good Hermes build, you can easily flit about each chamber. This build is especially useful against bosses with wide attack arcs or that attack from multiple directions, like the Hydra and Theseus and Asterius. Just be careful in Asphodel — one misstep and you will lose health to the lava pits.