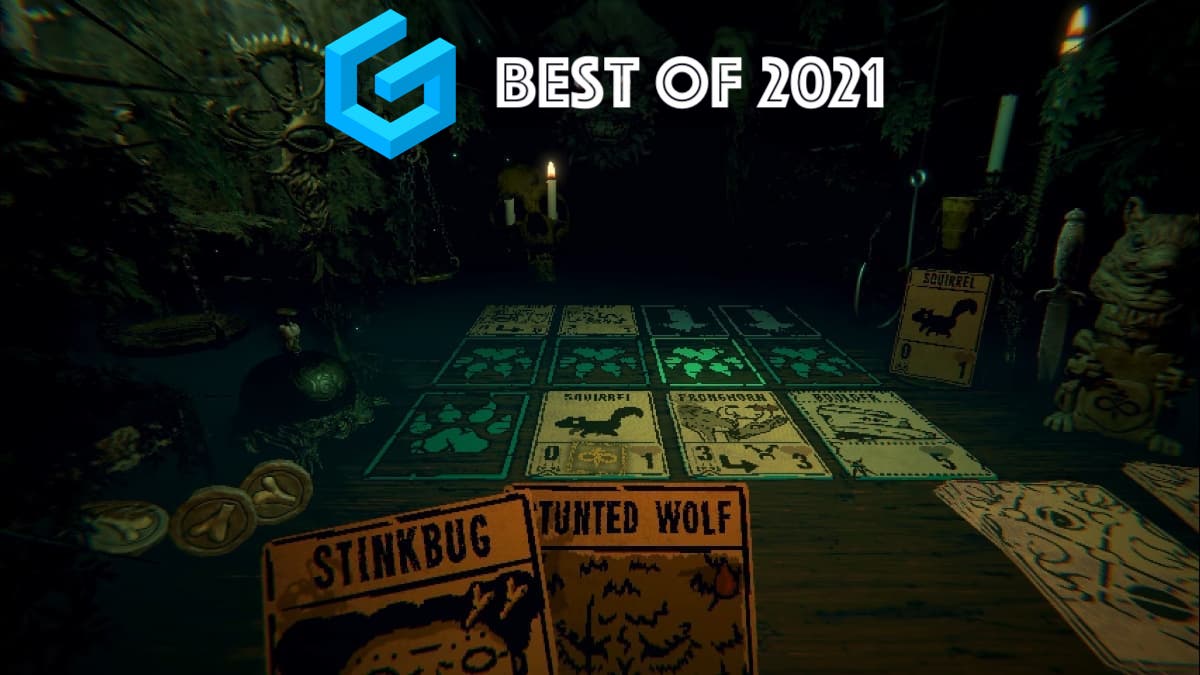 2021 was an excellent time to be a strategy game fan. There were multiple games released this year where you had the chance to prepare your forces, plan your offensive, and tackle overwhelming odds to topple your enemy. But only a handful were true standouts that stood above the rest. These are the five best strategy games that released in 2021.

Inscryption is a rogue-like card game where you work your way through the various acts, attempting to defeat your opponent using your limited cards and woodland creatures. What sets Inscryption apart from other deckbuilders is the atmosphere and story happening in the background, immersing you in the experience as much as you have to think about what’s going into your deck.

There’s no better way to prepare someone for Inscryption except to have them sit down, strap in, and prepare for a puzzling strategy card game and an even more mystical story.

Loop Hero is a game that came out of nowhere close to the beginning of 2021. Essentially, your hero makes loops around a static track that you slowly add elements to throughout your game, such as creating enemies, terrain tiles, buildings to loot, and creating unique combinations if you place down certain tiles next to each other. It’s a very intricate game full of layers and has plenty of depth for multiple playthroughs.

What makes it different and profound was the decks you could build and the classes your character could play. If you choose to play as a rogue, you might want to alter your deck to better fit your character’s playstyle, or if you’re a necromancer, you might choose to pull a specific enemy type out of your deck. You could approach your deck and character whatever felt best for you, and there was no wrong way to do it. The massive maps you could create on runs and how long you could go became highly satisfying, especially to reach the end of an act and face the challenging boss.

3. Pathfinder: Wrath of the Righteous

Pathfinder: Wrath of the Righteous had the difficult task of making the Pathfinder tabletop game approachable for both veterans and newcomers alike. The rules are incredibly in-depth and challenging to learn, but Wrath of the Righteous made the entire game approachable, with a wonderful story along with it. The journey your character goes through is satisfying to see unfold as you get to watch all of the small details spin based on your personal choices.

The combat could prove difficult, and the beginning felt a bit rough, especially for a new player. But the game’s tutorials and narrative start had a good way of weaving the introduction together to make for a heroic journey. What really made Wrath of the Righteous phenomenal was noting where your character starts and seeing where they end up. While not everything may have gone your way, the conclusion felt delightful and remained a rewarding experience.

Humankind is a turn-based strategy game that tried to wiggle its way into the genre usually dominated by the Civilization series. However, even if Humankind wants to do something similar to those games, it does different enough to make it a standout choice. It succeeds in several places with its overall pacing and refreshing combat.

What made Humankind a refreshing game to play was how it handled the different ages. Each time you’d go through a new era, you could select a unique civilization route to go down, giving you a different focus for the next several turns, or you could choose one similar to what you’ve already been doing. It made for a satisfying transition, ensuring the 200+ turn games felt different throughout the experience, rather than needing to start a brand new game for something new to happen.

Age of Empires IV is a return to form for Relic Entertainment. The team brought back the classic Age of Empires feel and still made it exhilarating even after not having a game in the series for over a decade. Additionally, two notable civilizations felt very different from the others in Age of Empires IV — the Mongols and the Rus — which could give quite a bit of hope for the future of the series and the team innovating on an already phenomenal foundation.

Age of Empires IV remains the top strategy game from 2021 with its fluid combat mechanics and stellar art. Not only is the multiplayer experience exciting, but the single-player narrative has superb real-world and in-game art and a wonderful historical narrative.