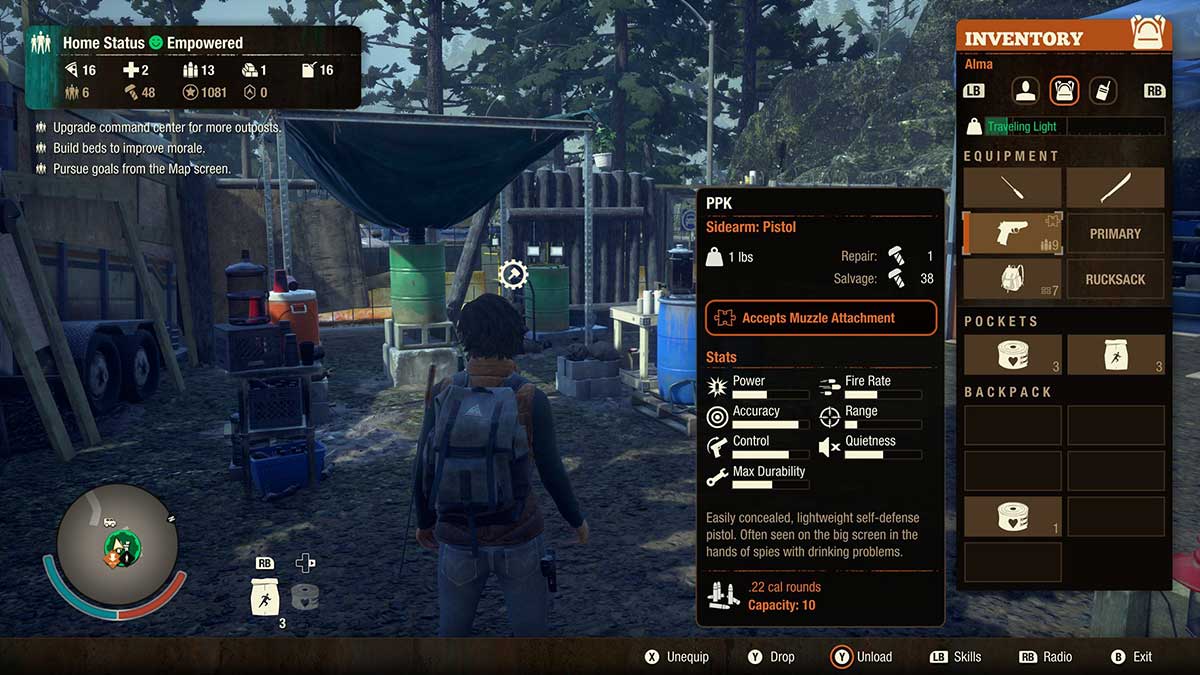 With update 25, Undead Labs finally added sidearms to State of Decay 2. This feature brings something to the game that fans have been asking for since launch, a backup weapon they can switch to in a pinch. We’ve got some tips and tricks you can use to make the most of your sidearm in your next community.

Don’t forget about your sidearm

Sidearms are easy to forget about when you have such powerful primary weapons. The most important thing to do is to remember that you have a sidearm at your disposal. After you’re done laying waste to a horde and run out of ammo, get into the habit of quickly swapping to your sidearm just in case there are any stragglers. It avoids you being pounced on while you reload, and there’s no need to retreat when you’ve used up a magazine.

Sidearms are just like any other weapon in State of Decay 2, and they need ammunition. While you can go out into the world with the single magazine that’s loaded into your sidearm, you’re better off taking some extra ammo with you. This does mean that you’ll need to pack a melee weapon, primary firearm, sidearm, and ammo for both, but you won’t regret it when you’re facing down a dozen enemies at once.

Save your primary weapon for when it counts

Sidearms are smaller, less powerful firearms in State of Decay 2. However, they still get the job done when you’re killing the infected one by one. Save your primary weapon’s ammo for when you really need it in major encounters. Get used to pulling out your sidearm and using that first when you can see a couple of enemies at an Outpost or location you want to explore. There’s no need to go big and loud immediately.

Give every survivor a sidearm

Firearms are scarce in State of Decay 2, particularly when you’re just starting a new community. Don’t try to give everyone a decent primary weapon straight away, or have them share a single snipe rifle or automatic rifle. Instead, focus on getting a sidearm for each character. These are easier to find, and they’re far more useful if you’re keeping quiet and mainly using melee weapons anyway. You can always hand out the big guns when you’ve scavenged enough from around the map.