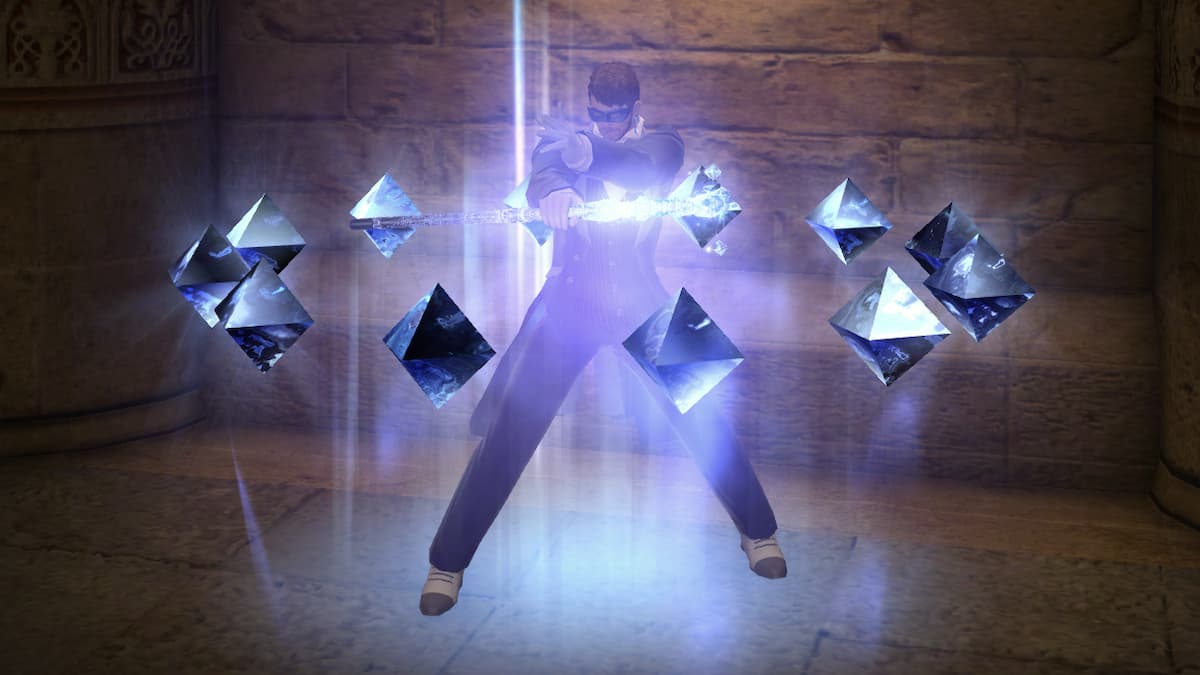 The Masked Carnivale is a set of fun solo boss challenges for the Blue Mage limited job in Final Fantasy XIV. Every week, there are three targets of varying difficulties assigned to different fights that award Poetic Tomestones, gil, and a ton of Allied Seals when completed. Allied Seals can be used to purchase Aetheryte Tickets from your Grand Company, and so this is one of the best methods of obtaining free teleport tickets each week. This handy guide will tell you exactly how to alter your strategies each week to complete the targets with little stress or confusion.

Note: Weekly Targets reset every Tuesday at 12:00 am PT.

All fights will utilize DPS Aetheric Mimicry unless otherwise stated.

This is an extremely simple gimmick fight that requires Sticky Tongue and any ranged spell. Ice Sprites do a lot of damage, so you must use the slimes to kill them.

Act 1 – Keep your distance from the Lava Slime and cast any ranged damage spell on it. It will explode and kill the Ice Sprites.

Act 2 – Use Sticky Tongue to bring each Lava Slime to the outside of the nearest crate within line of sight of the Ice Sprite. Once it’s in position, get to a safe distance and used a ranged spell on it. It will explode and kill the Ice Sprite. Do this for all four targets.

Act 3 – Getting in range of the Gladiatorial Nodes will cause them to cast a deadly explosion that will kill you if you are not behind the wall. The goal here is to run near the Node just as it starts its cast while using Sticky Tongue to bring a Slime in range, and then hide behind a wall until the cast goes off. Do this for all three Slimes on a side and then get behind the wall and use a damaging ranged spell on a Slime. The explosions should take out the Node. Do the same on the other side to complete the Novice Weekly Target.

Mastery of Water is the best Target challenge you could hope for in this fight. The boss is weak to Water attacks, and so using nothing but this element on the boss is the advised strategy anyway.

Act 1 – Simply spam the boss with any of the attacks listed in the suggested spells, preferably Hydro Pull for the extra potency. The boss will hit you, but it shouldn’t hurt that much. It will periodically case a frontal cone called Boulder Clap that needs to be avoided. Earthen Heart is a circle that appears on the ground and will leave fire. You can either interrupt it or get out of the telegraph. Obliterate does need to be interrupted by Flying Sardine. This will not go against Water Mastery as there is no element attached to the spell.

The trick to this fight is using the barrels to deal damage to the Arena Manticore while also DPSing it yourself. You have to be ready to move to a new barrel once the explosion hurts the creature, as you only have less than 4 minutes and 20 seconds to complete the weekly target. Strong rank 4 and 5 multi-target damage spells (encouraged ones are in the suggested spells section) are needed to meet the timer comfortably so you can explode barrels while also hurting the bosses. Also, don’t be in the barrel’s AoE circle as it will hurt you a lot.

Act 1 – Move the Arena Manticore towards a barrel and bait its wind-up swiping animation. When it does this, move away and it should strike the barrel, which will explode and damage the boss. Kite it around the arena doing the same with all the barrels, being sure to only use rank 4 or 5 spells to damage it while kiting. Eruption works well to strike both a barrel and the Manticore while moving, and alternating between Peripheral Synthesis and Mustard Bomb will do substantial damage to the boss. Be sure to stand near a barrel when the boss prepares to lunge as it will fly towards you and cause the barrel to explode. The boss might also telegraph a fireball circle underneath you. This will explode a barrel, but you don’t want this to happen to barrels that the Manticore is not near, so remain near the creature when fighting it.

Act 2 – The fight is the exact same as Act 1, except now there are two of them. The same strategy applies here, and the bosses attacks will actually hurt each other as well. It can be a little annoying keeping them both near the barrel explosions, but if you follow the same strategy as Act 1 there shouldn’t be anything different to watch out for. Try to keep the bosses close together so that they hurt each other when they attack.