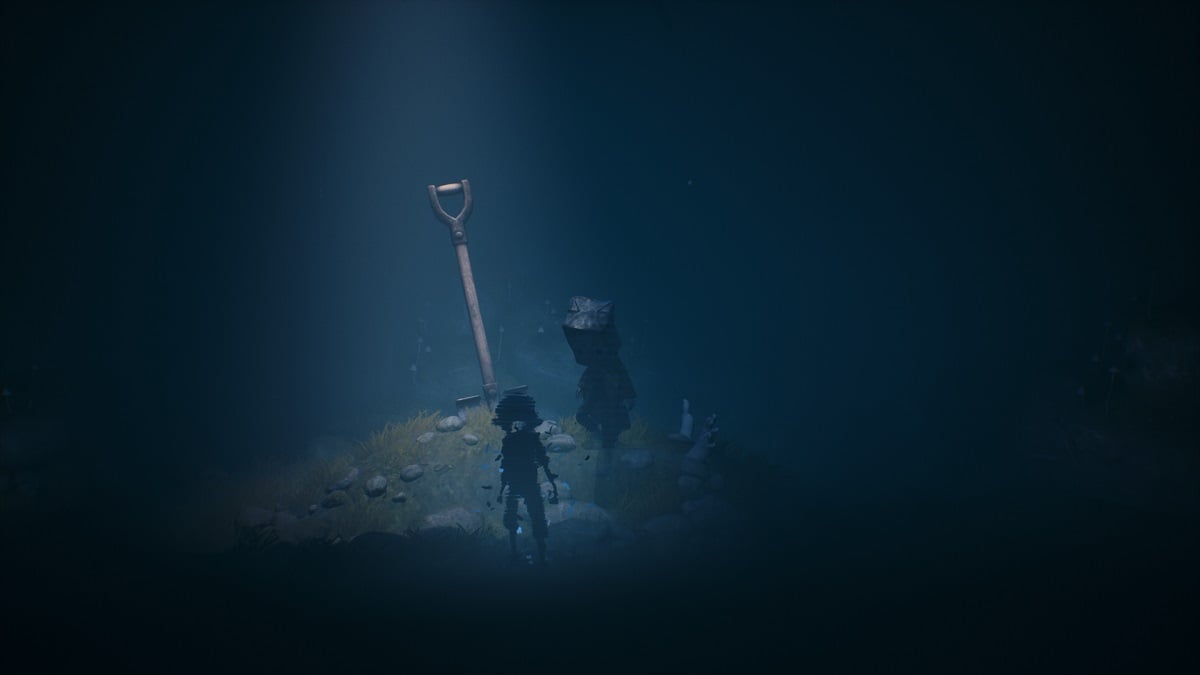 By the first broken bridge, you come across. Before you climb the piece that is hanging down, to cross to the other side, walk right towards the screen. You will enter a burrow.

Follow the passage until you find an underground grave with a shovel in it. The Glitching Remain is nearby.

The next one can be found after you fall down a hollow log following your first encounter with some bear traps.

Before you move forwards, turn around and look for a passage under the log. Head inside to find the child’s remains by a dead animal.

In an outside area after you have teamed up with Six. There is a toilet cubicle here. Call Six over so she boosts you up to the door’s latch. Open it to reveal the glitch.

The final glitch is on the beach after you have escaped the Hunter. Walk towards the TV set you can see in the distance to find it.

In a destroyed building, after you and Six work together to reach the upper floor using some TVs and rope. Once you are reunited on the top floor, head into the room that Six exited before you cross the wooden plank to the other side.

The glitch is next to the TV that Six rode up to find you.

In the school playground. Run to the back of the play area to find a tricycle next to a dumpster and a bench. The glitch is next to the broken bike.

You can find the next glitch once Six is taken by the school bullies. After you have killed two of them, climb up a chair so you can cross a broken door and jump down to the next area.

There are six lockers lining the corridor. Open the third one to find the glitch.

At the top of the giant staircase in the school. Walk up and head left.

Follow the path towards the screen to see it sitting between some wooden banister rails.

The fifth child’s remains can be found after you open the locked door by the staircase. Follow the path down some more stairs, and you will spot a dinner tray trolley.

You need to move the trolley to the opposite wall so you can access a vent. Move the trolley and open the door it was propped up against. Enter the room and climb up the dead body to reach the glitch on the counter.

The final glitch’s location follows Mono and Six using a dumpster to reach a high ledge when you are back outside. Walk forward until you see a little enclave with a paper boat in a puddle. The glitch is there.

The first glitch’s location is in the hospital ward after you acquire the flashlight.

When you enter the ward, walk to the back wall to find a small toy trolley with jars around it to encounter the child’s remains.

This one can be found in a corridor once you pass a room with a mannequin in a dentist’s chair.

After you exit that room, turn left towards the metal shelves. The glitch is at the dead end, trying to reach a toy duck above it.

Found in a corridor after the first set of mannequins chase you. You will see a metal gate behind the room’s exit. Walk-behind the door to find a small gap you can fit through.

Squeeze through the slightly ajar door to the left. The glitch is inside this cell, but be careful not to fall down the hole in front of you.

In the hospital shower room. Move the box at the back by the showers to reveal a vent.

Head inside and follow it into a room with a bath to locate the glitch.

Once you have left the hospital, head for an open sewer in the area outside. Drop down and immediately spin around to grab the ladder. If you don’t, you will fall to your death.

Climb down, and you will see the glitch sitting at the edge of the sewer.

This one can be found after you solve the first elevator puzzle. After riding it into the ceiling, head to your right and move the box that blocks a vent.

Head inside and follow it to find the glitch in a secret room.

On the rooftops after you see the Signal Tower for the first time. Leap across the tiles until you reach an apparent dead end.

Underneath the wooden structure is some boxes. Climb them and head through the window. Drop down into the small room to find the glitch.

The last Glitched Remain is located once you have ridden the first telephone line using a clothes hanger. Once you enter a room through some shutters, head back outside onto the roof.

Walk towards the other open window. Climb inside to find the glitch.