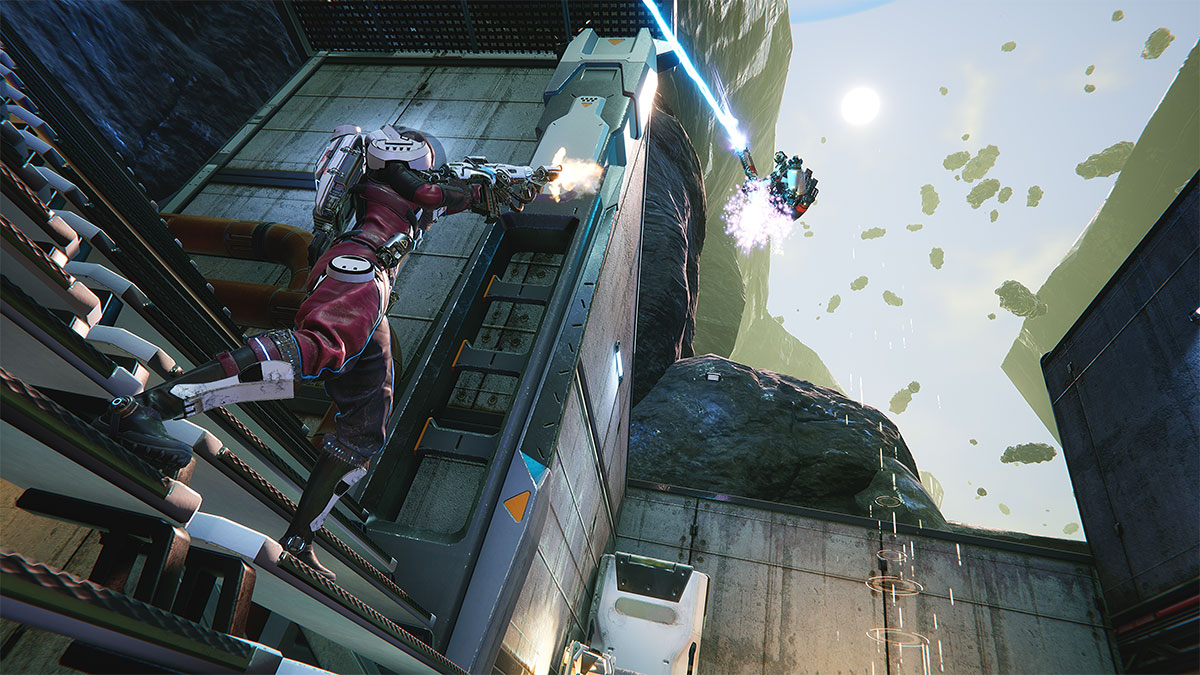 Lemnis Gate is a multiplayer team-based FPS that centers around its trippy time-travel mechanic. Players layer their actions over the course of five time loops per match, creating a combination of turn-based strategy and FPS action. Like many multiplayer games, players select a character in Lemnis Gate rather than a custom loadout. With seven characters to choose from and each offering a wide array of weapons and abilities, it might be hard to know who to gravitate to first. This guide will go over each Operative and give you a better sense of who will compliment your own playstyle.

Kapitan is your bread-and-butter FPS character, perfect for players who want to shoot first and ask questions later. Out of all the Operatives, she’s likely the one most players are familiar with. Her weapon is an Auto-Rifle which, while basic, does a great job at eating through shields thanks to the number of bullets it can quickly shoot in a single clip. Kaptain’s character ability is a reliable Frag Grenade that explodes on impact and allows her to potentially take out multiple enemies at once. The best thing about her ability is the visual aid that accompanies it, which allows you to know exactly where your grenade will land.

Zarya mains from Overwatch will feel right at home with Karl, who comes with a Precision Beam extremely similar to her Particle Cannon. This character is perfect for players more interested in assisting their team than racking up kills. Karl’s Precision Beam has a low damage output but can be fired continuously, letting you melt through your enemies with, well, precision. Its Protection Orb ability summons a shield bubble that can be placed on the ground and will stay active until it receives a fixed amount of damage.

Vendetta is a character who fits comfortably between both close and mid-range, perfect for players who like being close to the action. Her Scatter Gun is a scoped shotgun that packs a massive punch and makes her extremely deadly at close range. Having to get so close to your opponents can put you at a disadvantage, which is where her Attack Pods come into play. Attack Pods act as pint-sized turrets that automatically lock onto enemies and attack them, and while their range isn’t incredible, it’s enough to compensate for the Scatter Gun. Keep in mind that Attack Pods can only be placed directly in front of Vendetta and take about two seconds to deploy.

Deathblow is perfect for players who crave pure destruction — his main appeal is his Eradicator, which is an awesomely named rocket launcher. His rockets are extremely dangerous and can one-shot enemies even at extremely long range. The downside is that these rockets are also slow to reach their target and depending on the distance can be dodged by your opponent if they’re fast enough. His Proximity Mines allow for some tactical thinking, as strategic placement can blow up unsuspecting enemies.

Striker is the sole sniper Operative, and his Zero-Drop rifle is absolutely deadly in the right hands thanks to its scope. Even from the furthest distance, a well-lined shot will either do a massive amount of damage or one-shot an enemy. Because aim is so critical to Striker’s success, it’s important to make use of his Ripple ability. Ripple temporarily slows time down to a crawl and lets you easily line up a headshot.

Much like how Karl is obviously inspired by Overwatch’s Zarya, Rush is influenced by Tracer and is great for anyone who prioritizes speed. He dual-wields a pair of handguns that have small ammo clips, but its extraordinarily fast rate of fire makes up for that. His Kinetic Booster ability allows him to quickly dash forward, making it handy to get away from enemy fire or traverse gaps mid-air.

Toxin’s loadout makes her an extremely unique Operative for players who want to focus on map control. Rather than getting in the action directly, she uses her Tox Cannon to fire globs of toxic chemicals that stick to surfaces. These chemicals have a low rate of damage but allow her to zone off areas of the map. Her Displacer allows her to teleport to wherever she chooses and creates a projection that shows where she’ll land. While this can help her escape enemies, it also allows her to position herself in more strategically advantageous areas that make her toxic chemical spread a real challenge for the other team.