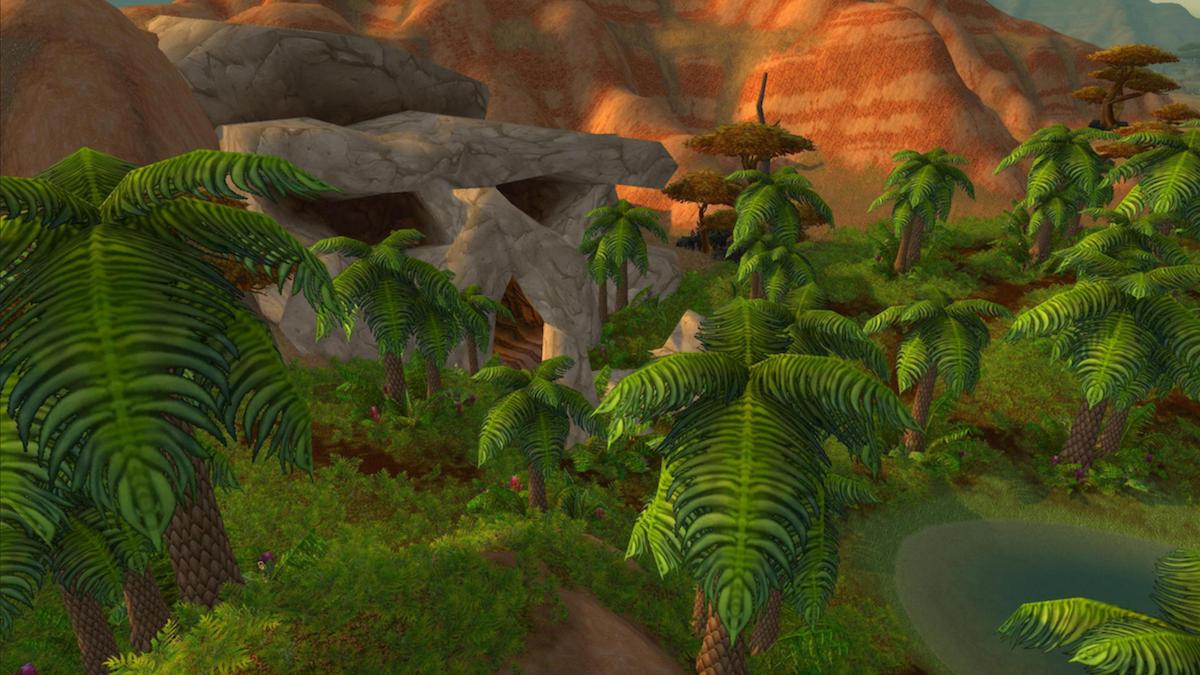 The first non-linear dungeon in World of Warcraft Classic, the Wailing Caverns, can be pretty tricky to navigate for new players. Its easy to roam around, haphazardly, and getting lost in its winding, intersecting, areas. So be sure to get your bearings with this guide before you and your crew head into the depths of this dangerous place.

Regardless of your class, the recommended levels for the Wailing Caverns is 17-24, but on the lower end of that range, it can be pretty difficult to get through.

You can find the entrance to this dungeon in The Barrens, to the southwest of The Crossroads.

Start at the northern side of The Oasis where you will find a large rock formation that is leading into a cave. Head inside and take a right at the first intersection, then a left, and you will come to an area with shallow water. Proceed straight ahead to follow the curving tunnel until you come into a large cavern, full of large plants and a pool of water. Follow the path leading down to your right and you will come across the dungeon entrance.

There are a handful of quests that deal with the Wailing Cavern, most of them starting outside the dungeon and one of them inside.

We recommend picking up all of these quests that you can before you head into the dungeon to be the most efficient you can be.

There is only one quest that starts inside the dungeon and it is available to both factions:

The Glowing Shard – this requires you to find someone in Ratchet that can tell you more about the Glowing Shard. You will need to take the shard to Sputtervalve in Ratchet, then head to Falla Sagewind, who is found on top of the mountain that covers Wailing Caverns. Dropped from Mutanus the Devourer and requires level 15.

Locations in the dungeon

Since the dungeon is non-linear, it can be difficult to navigate through its location. If you follow the path below then you will have a much easier time getting through it and completing everything you need to:

Here is a breakdown of all the bosses you will fight in the dungeon:

The first boss of the dungeon is a level 20 elite humanoid. She can spawn in any of the torch circles at the top of the cavern she is in.

Wipe out the enemies around her before pulling her your way. Be mindful of her Sleep and dispel whenever you can. Other than that, the fight is pretty straightforward.

The second boss is another level 20 elite humanoid. This boss is pretty straightforward the whole way through. There aren’t any unique mechanics you should worry about with this guy.

Robe of the Moccasin
Cobrahn’s Grasp
Belt of the Fang

The first optional boss is neutral unless you choose to attack him. We don’t recommend you take him on unless you have a tank shield character.

Other than that, it isn’t a boss that you need to worry too much about.

The third boss of the dungeon is a level 21, you guessed it: elite humanoid.

You will want to look out for the boss casting Healing Touch and interrupt it. Also avoid his Thunderclap attack if you are a ranged character.

The second optional boss is a level 21 elite beast who will cast Chained Bolt. The attack will deal out AoE damage, but is minor enough that you don’t really have to worry about it and just heal through it.

This is the fourth boss of the dungeon and also the last Leader of the Fang. He is a level 21 elite humanoid. Just like with Anacondra, watch out for his Sleep attack, which needs to be dispelled as soon as possible or removed by a Tremor Totem from a Shaman.

The fifth boss of the Wailing Caverns is also decently harder than the other bosses you have fought before it. He is a level 21 elite elemental.

Verdan has a lot of health that you will have to deplete. This means your DPS characters will have to work quick to take it out before your Healers run out of Mana. This isn’t going to be an easy feat as Verdan deals out a lot more damage than the Fang’s leaders.

His melee attacks are the main thing to watch out for. They can deal a ton of damage, even to Warriors with tanking shields. He can also do a stomp attack that deals out AoE damage and roots players hit by it. Ranged players need to stay away from these attacks.

The final boss of the dungeon will be triggered when you are trying to wake up Naralex. He is a level 22 elite Murloc.

In addition to the boss, there will be waves of adds that you will have to contend with as you fight. Some players will be hit with a Naralex’s Nightmare attach, which will put them to sleep. They need to be attacked to break it. He can also use Thundercrack to hit ranged players.