Genshin Impact Version 3.1 introduced a whole new desert region to Sumeru, bringing us new characters Cyno and Candace. Now that the second phase of Version 3.1 has begun, Cyno and Candace are about to make their leave, making room for another new 5-star character to take the spotlight. Nilou, a Hydro character, will be the newest 5-star character in the game, receiving her own Character Event Wish banner. Additionally, the 5-star Geo character Albedo is receiving a rerun Character Event Wish banner.

The announcement of the new banner was officially confirmed through the game’s official Twitter account, which also confirmed the release date of this new banner for October 14.

Nilou is an interesting character who scales off of HP, designed to work together well with the newly released Dendro characters in the game. While there aren’t many Dendro characters currently in Genshin Impact, Nilou will make a strong addition to your team in both the present and the future. Meanwhile, Albedo is an easy-to-play off-field DPS character, dealing tons of damage with minimal effort. While Albedo works best for Geo teams, his simple playstyle makes him easy to fit into any team where there’s a gap.

Meanwhile, the 4-star characters making a return on this banner are Barbara, Xiangling, and Beidou. This trio of characters will receive a rate-up during both Character Event Wish banners, meaning you will pull them more often while trying to get Nilou or Albedo. Barbara is a solid healer if you are missing one in your teams, while Xiangling and Beidou are both revered for their sub-DPS capabilities. Be sure to have at least one of each character in your account. These new banners will begin on October 14 and end on November 1. 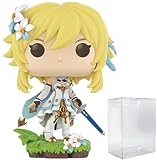