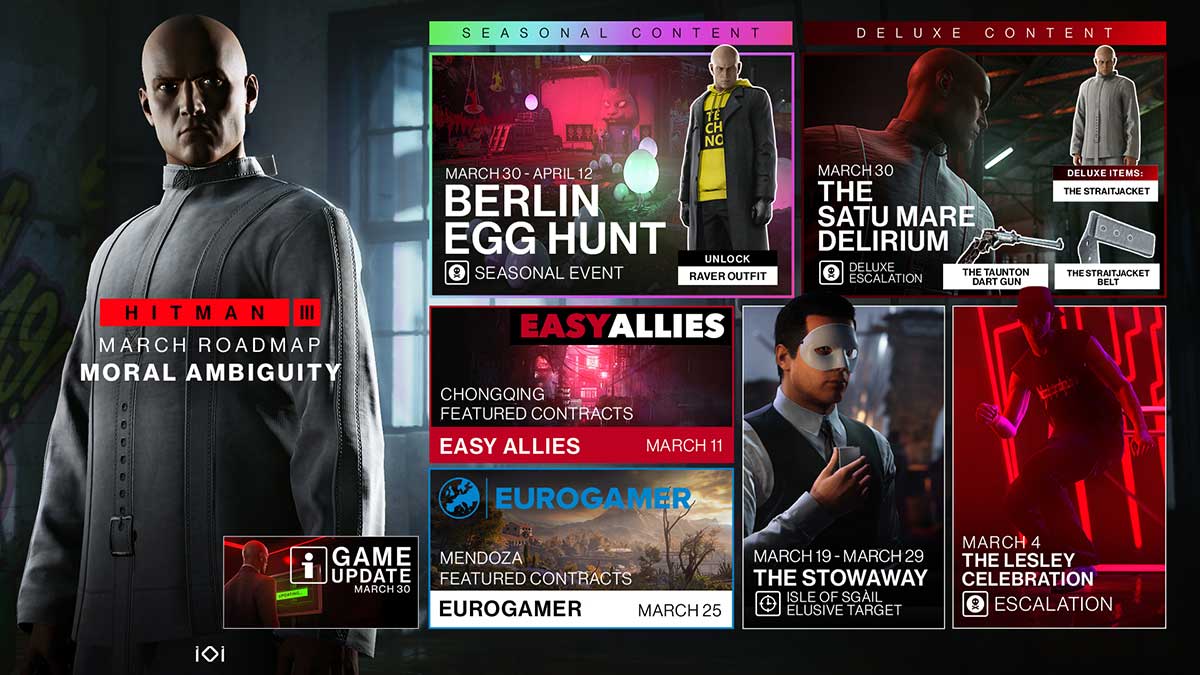 The March content roadmap for Hitman 3 has been revealed. Showing more Featured Contracts, Escalations, an Elusive Target, the game’s first seasonal event, more quality of life updates. As with February’s, March’s roadmap brings a host of brand new content for all Hitman 3 players. To start things off, The Tactical Turtleneck is now available for all players to earn, not just Hitman 3 Deluxe Edition owners.

By order of release date, the first new content players are getting lands today. Players can enjoy a brand new Escalation, the first Escalation to be set in Berlin, The Lesley Celebration.

On March 11, five new Featured Contracts will be added to the game, courtesy of the Easy Allies community. Each contract will be set in Chongqing.

From March 19, players can take on Hitman 3’s second Elusive Target. The Stowaway is set in the Isle of Sgàil location and will be live until March 29.

On March 25, five brand new Featured Contracts set in Mendoza will be added to the game. The Eurogamer community has put these together.

The final Deluxe Escalation will be added to the game on March 30. The Satu Mare Delirium is set in the Berlin location and sees Agent 47 taking revenge on those who have captured him. Three unique rewards are up for grabs in this Escalation, The Straightjacket outfit, the Taunton Dart Gun, and The Straightjacket Belt.

Finally, Hitman 3’s first seasonal event will take place between March 30 and April 12. This event brings new Easter-themed NPCs and items to Berlin. While the specific details of the mission are unknown, it looks like players will need to use poisonous eggs to take down targets that are wearing specific rabbit masks. The reward for completing this event is The Raver outfit.

March 30 will also see the latest game update come to Hitman 3. As with the last one, it will address any bugs that players have found and introduce new quality of life features.