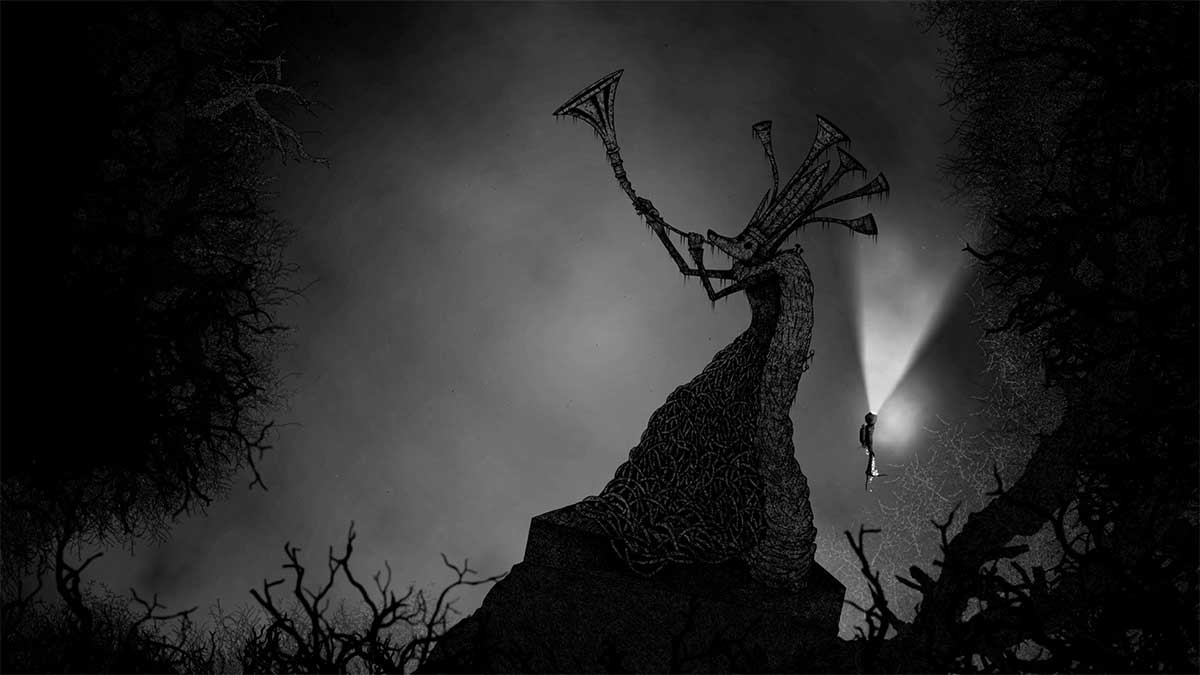 Environmental puzzles can only go so far when a developer chooses to ground its game in the real world. Spiral Circus Games has managed to make the entirety of Silt feel fresh without pushing the boat out too far simply by looking below it. This thalassophobic adventure through the depths of an unknown world is filled with nightmarish terrors to overcome, and it recalls the visuals of Limbo and Inside. For the most part, Silt is impossible to put down.

The story of Silt is hard to follow because it’s only hinted at through artwork on the walls of the environments you explore and through the creatures of the world. You play as a lone diver trapped at the bottom of the ocean. Right off the bat, Silt has you making the most of the one power that seems to separate you from everyone else in your long-dead civilization: the ability to possess other creatures and objects. This is portrayed as long glowing tendrils of life that seek out the fish and machines around you, making you feel slightly on edge even though you’re technically solving puzzles and progressing as intended.

Using this power, you must find the Goliaths of the sea, kill them, and bring their eyes to the great machine. The world’s black and white palette lends itself to the cosmic themes, as does the architecture of the ancient people that built said great machine, all of which is explored from a 2D perspective with environments in a hand-drawn art style. There’s plenty for players to explore at their leisure if they want to learn more about the world and how each fish interacts with the other lifeforms and structures around it. The idea that somehow each creature has evolved from ancient machinery over time is fascinating, especially in the four Goliath bosses.

The bulk of Silt’s gameplay revolves around possessing the fish in the sea and using their abilities to solve puzzles, clearing the way for something you won’t understand until the game’s conclusion. One fish has a large jaw to bite through chains and rope, while another has a strong skull for smashing rocks. Each fish has a purpose within the room or environment you find it in, and most of the time exploring and uncovering that purpose is how you progress as opposed to trial and error.

Related: What do you do with the tree in silt?

Thankfully, Spiral Circus Games took a smart approach to puzzle design, with a handful of impressive enemy and fish designs used in various ways throughout the whole game. Less is definitely more, but making the game bigger than it is would have clouded the water by the time I finished my three-hour playthrough. However, there are a few puzzles in Silt that feel as though they need to be tested further or tweaked in some way to become less frustrating, because they almost ruin the game.

For example, one puzzle requires you to swim through a small tunnel filled with crustaceans that will pop out and eat anything they see. Possessing a fish to swim past them will distract them for a moment, but the true solution is killing these creatures. To do this, you must direct a teleporting fish through the dangerous cave, possess an exploding floater, then swim down the cave and kill the crustaceans one after the other. The puzzle is laborious and made more challenging than it’s already designed to be by the teleporter fish, which can refuse to teleport if it’s facing slightly too close to a wall. If the crustaceans were slower or the cave slightly wider, the puzzle wouldn’t be so awful, but as it is, I was begging for the design to be a one-off. Unfortunately, it’s reused in a similar way twice more, which is when I almost had to stop and give up.

It doesn’t help that the game’s controls aren’t quite as precise as they may need to be. It almost seems like the puzzle designer and the person defining the speed and movement arcs of each creature rarely compared notes, leading to frustration that will certainly make you stop before jumping back in after completing the game. While these aspects did give me trouble for a while, the majority of Silt is incredibly fun to play, with solutions to puzzles that make you feel clever because there’s no direction as to what you must do outside of the environments themselves.

Titans of the deep

The best parts of Silt are the boss fights and follow-up sequences. Each boss has been cleverly designed and requires you to think about the colossal room or rooms they occupy to kill them. Each one is a grotesque amalgamation of machinery attempting to mimic ocean life, never quite succeeding enough to look natural but going far enough to appear absolutely terrifying compared to your tiny diver.

We found ourselves powering through the puzzles in the rest of the game just to reach the next boss, and they never disappointed. One that stands out as the best is a tree with creepy chicks nested in it that you must feed with grubs from the surrounding rooms. Once fed, the tree shows off its true form, and you need to work out how the environment is tricking you before you can kill it and take its eye.

Every boss fight is bookended by a segment that sees players swimming into the great machine to transfer the soul of the most recently killed Goliath. This is where most of the world-building is done and it’s a treat for anyone that likes to explore fictional ancient cities or places. More bosses and therefore more of these sequences would definitely be welcome, but as it is, Silt has enough to keep you engaged without overstaying its welcome.

Silt is a brilliant game — most of the time. The environments are breathtaking, the world fully realized, and there’s a sense of horror that manages to seep into you while you play it even though it’s not really a scary game. Despite some downsides, this is the most memorable indie puzzler I’ve played all year. You’ll remember it long after you’ve completed it and will want to return, because ultimately, just like the sea, it always feels like there’s more to explore, a fish you didn’t see, and maybe even another boss hidden somewhere at the bottom.