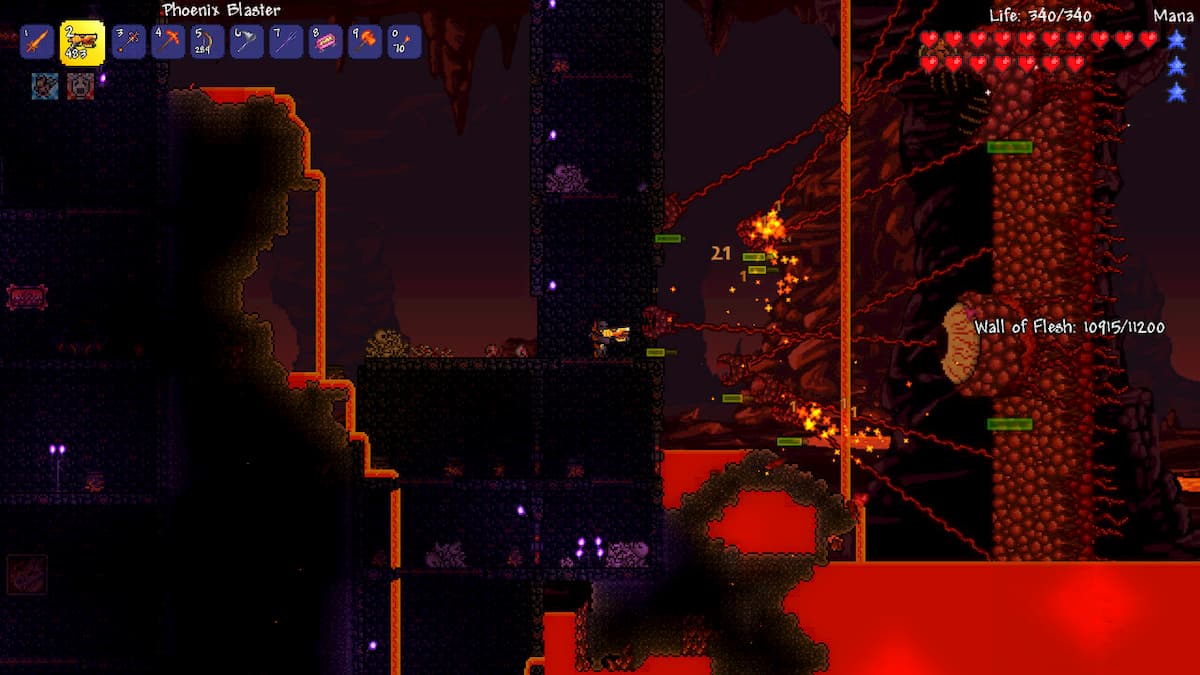 There are a variety of bosses you can find in Terraria, many of them dropping high quality loot that you can use to bolster your adventurer and craft stronger items in the game. You also need to battle these powerful adversaries to advance the story of the game. In Terraria, the game does not provide you with a detailed breakdown of how you can find these bosses, or what you need to summon.

We have that information ready for you to make your life easier, ensuring you can advance through Terraria at a gradual rate. The more information you have at your disposal, the better equipped you will be to progress through the game.

Summoning all bosses in Terraria

There are three types of bosses you can find in Terraria. Pre-hardmode, hardmode, and event bosses.

You need to use Worm Food or break three Shadow Orbs. You can create Worm Food by finding 30 Vile Powder and 15 Rotten Chunks, and bring them to a Demon or Crimson Altar. After crafting it, you must proceed to the Corruption portion of the game and consume it, otherwise it will have no effect and will not summon the boss. Alternatively, you can find the three Shadow Orbs by visiting the Chasm levels of the Corruption.

You can only summon the King of Slime by using the Slime Crown. The only way to create is by using 20 Gel with a Gold Crown or a Platinum Crown, and then creating it at a Demon or Crimson Altar. After you have the item, you can use it at any time to summon the monster.

There are two methods to summoning Queen Bee. The first is creating the Abbemination and using it in the Jungle biome. To craft the item you need to have a bottled jar of honey, five hives, five honey blocks, and a stinger on you. You can craft the item by item. Alternatively, you can break the Queen Bee’s Larva, which you can find inside a Bee Hive in the Jungle biome.

Skeletron is how you gain access to all Dungeons in the game, so it’s pretty important. You can summon it by speaking to the Old Man NPC at night. Talking to him at this hour activates curse and summons to the boss to your location. After you defeat Skeletron once, you can summon it again by killing the Clothier, an NPC who sells vanity items to you, by using the Clothier Voodoo Doll and it is nighttime.

You can only summon the Wall of Flesh by throwing a Voodoo Doll of the Guide, the first NPC that is near you at the start of the game, into lava. The Guide must be alive at the time when you throw it into the flaming pit. To find the Guide Voodoo Doll, you can take out Voodooo Demons in The Underworld.

To summon Duke Fishron, you need to find a Truffle Worm in the Glowing Mushroom biome. You must only capture it using a bug net. Once you have it, and you caught it using that particular net, use it as a bait on your fishing pole in the Ocean biome.

The large Golem is only summoned by using a Lihzahrd Power Cell at the Lihzahrd Altar, which you can find in the Jungle biome. The power cells have a chance to drop from the lihzahrd and flying snake creatures found inside the temples, or you can find one inside of the lihzahrd chest. You must first have defeated Plantera before you can summon the Golem.

There are two ways for you to summon the Moon Lord. The first method is to destroy all four of the Celestial Pillars that appear in the Lunar Event, which start after you defeat the Lunatic Cultist. They appear in four different locations all over the map. The second method is by crafting a Celestial Sigil, which you can do when you have 20 solar fragments, 20 vortex fragments, 20 nebula fragments, and 20 stardust fragments. Once you have all the ingredients you can find an Ancient Manipulator crafting station to make it. If you want to use the Celestial Sigil, the Lunar Events must not be active at the same time.

To summon Plantera you must destroy Plantera’s Bulb, which you can find after you defeat The Destroyer, The Twins, and Skeletron Prime. You can find Plantera’s Bulbs in the Underground Jungle biome after defeating these three bosses and you see the message, “The jungle grows restless,” on screen.

You need to find Gelatin Crystals to summon Queen Slime. These crystals are located in Pearlstone or Pink Ice Blocks in the Underground Hallow. You can use the Gelatin Crystal whenever you want to, to summon the Queen.

Skeletron Prime only appears after consuming a Mechanical Skull at night. It does not work during the day. You can only craft this item at a Mythril or Orichalcum anvil using 30 bone, five iron bars, three soul of light, and three soul of night.

The Twins will only arrive in your game when you use the Mechanical Eye at night. You can craft this item at a Mythril or Orichalcum anvil using three lenses, five iron bars, and six soul of light.

The Ice Queen is the final boss that appears during the Frost Moon event, which you can start by consuming the Naughty Present at night.

The Martian Saucer appears during the Martian Madness event. To start the Martian Madness, you must have defeated the Golem and by finding a Martian Probe. These probes can appear almost anywhere on the map after beating the Golem, and if they escape, the event starts.

The Ogre is one of the bosses you can encounter during the Old One’s Army tier 2 event.

The Pumpking will appear during the Pumpkin Moon event as the second or final boss.

Santa-NK1 is a mini-boss that you can fight during the Frost Moon event using the Naughty Present at night.

The Stardust, Solar, Vortex, and Nebula pillars appear on the map after defeating the Lunatic Cultist during the Lunar Events. You can find each of the pillars on different parts of the map with unique planets in the background.

What is XL candy and how does it work in Pokémon Go?