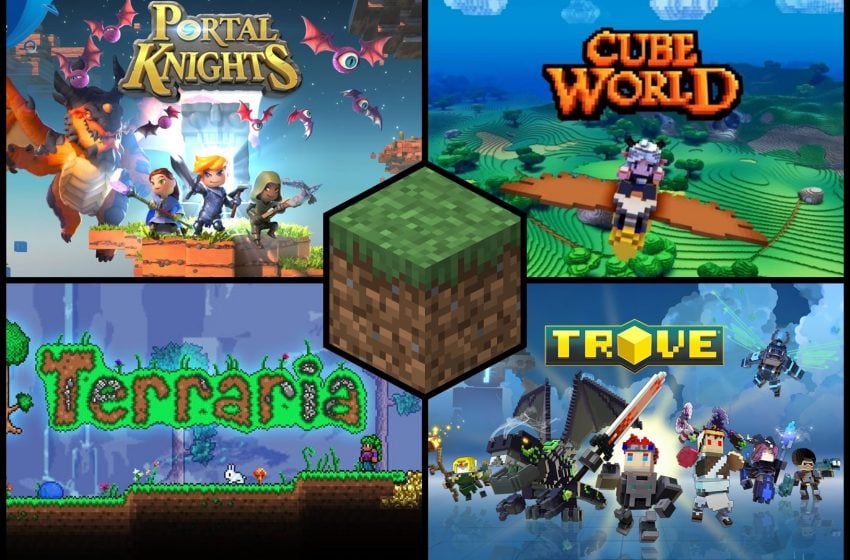 Minecraft has made a giant impact on the world of gaming. After recently beating out Tetris, the 2011-released sandbox title has become the bestselling video game of all time at 180 million copies sold worldwide.

Many players, some of our staff members included, have played this game for close to 10 years now, but if you were looking for something similar to Minecraft, but with a bit of a different twist, here are some awesome games you can check out.

First and foremost, we have Terraria. This is the only game on this list that also made a substantial amount of sales to make the top 25 selling games of all time, pulling in at number 21.

The things about Terraria that make it similar to Minecraft are the sandbox aspect filled with building, mining ore, biomes, crafting, the day-night cycle (and the dangers of the night), and the way tools can also be used for combat.

A few significant differences are that the worlds are a fixed size, and you choose that size at the beginning of the game: Either small, medium or large, and the fact that unlike Minecraft, Terraria is a sidescroller, and takes place entirely within two dimensions.

Choose to build, work toward fighting bosses, team up with NPCs, or explore. However, you play: this game will not disappoint.

Second up, we have Cube World. Unlike Minecraft, Cube World is not a sandbox game; however, it’s an action-RPG.

You get to start the game by creating your character. You choose their class (Warrior, Archer, Mage, or Rogue), and then you can design their appearance.

This game is much more similar to Minecraft in appearance than gameplay, but it still has biomes and crafting elements. You can still craft weapons, potions, armor, food, and even cosmetics. There is no building or digging element. Though you can blowup terrain with bombs, the game more is focused on exploration, battles, and quests.

Cube World is also a subject of hot debate. The alpha testing began in 2013, but it didn’t see it’s official release until the last day of September is 2019. Many players who were a part of the alpha argued the game wasn’t worth the wait, but those who came in fresh felt much more positively about the game.

Portal Knights is probably in some ways the most similar to Minecraft, and in some ways, an outlier. The world style, hot bar, crafting, and digging will all look very familiar to a Minecraft player, but like Cube World, you create your character and choose your class.

There are only three classes here, as opposed to Cube World’s 4, Warrior, Ranger, and Mage. Press F for the rogue mains, though they were added in an expansion.

The game allows for single and multiplayer, online and offline. This some having both sandbox and RPG elements is very cool, but the most significant difference between Portal Knights and the other games is that the world isn’t just one giant world.

Putting the ‘portal’ in its name, there are instead a series of randomly generated islands to explore with different resources you travel between as you progress through the game. You’ll then take on bosses called the Portal Guardians to get great rewards and bring peace to the lands.

Lastly, we have Trove. This is the only game on the list that is free to play, so if you are looking for something new, but don’t want to shell out the cash, this is the option for you.

Unlike the other games here, one could argue that Trove is to Minecraft as Temtem is to Pokémon, inspired by its predecessor, but is a Massively Multiplayer Online game, or MMO. There is also a class choice, and you can customize your character throughout the game.

Genre aside, in a way, it’s a median between all of the other 3D games we have taken a look at today. It has the adventuring and dungeons/quests like Cube World, it has a building like Minecraft on your home plot, and it has the portals to go from place to place like Portal Knights.

If you are looking to play a game with a large number of friends, or want to explore a world inhabited by other players, Trove is the choice for you.