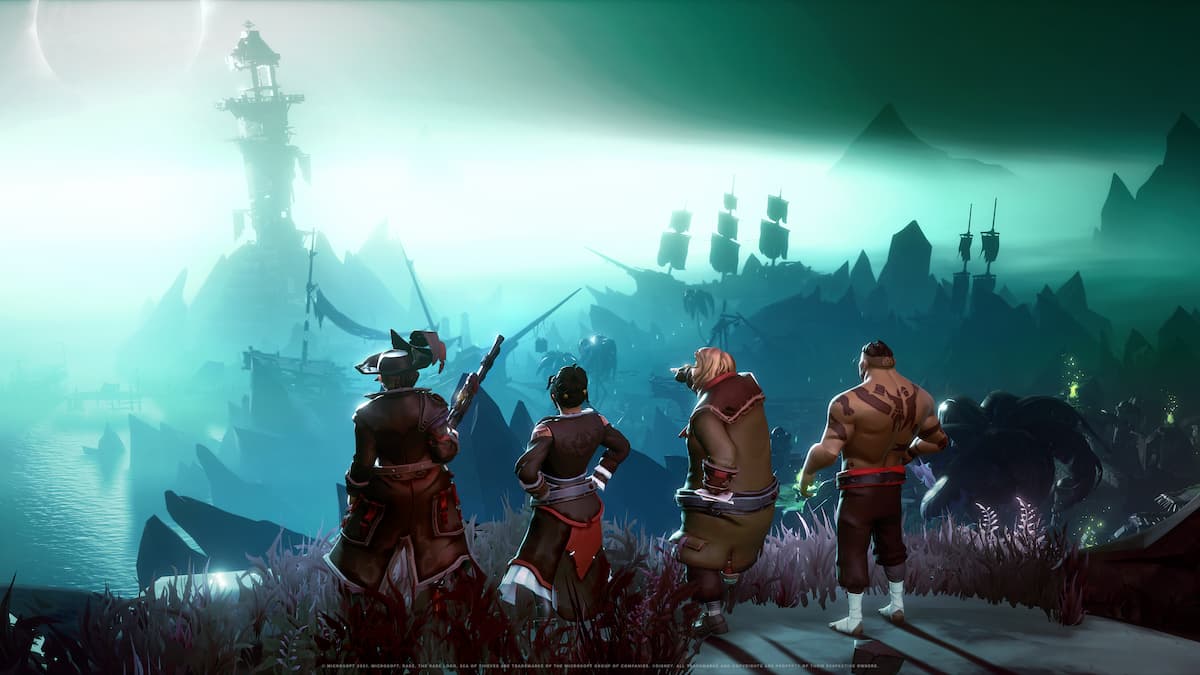 It’s easy to feel skepticism over a Disney crossover, and the announcement of Sea of Thieves: A Pirate’s Life, an expansion based on Pirates of the Caribbean, was undercut by exhaustion over the film series and the character of Captain Jack Sparrow in general. But developer Rare explained their vision for this set of five Tall Tale story missions, describing it as not just a tribute to the films, but the Disney theme park ride as well.

Sea of Thieves from its genesis was pitched as “Pirates of the Caribbean meets Wind Waker,” and A Pirate’s Life is not some soulless corporate tie-in, but an opportunity for the developer to fully realize the game’s original vision while paying homage to what inspired it in the first place. And for devotees of Sea of Thieves who have paid attention to the game’s earlier Tall Tales, its theme park inspirations were evident from the very beginning.

Narrative-based video games already carry a lot in common with theme park rides: there is a linear path that the game guides you through, usually through automated NPCs and scripted cinematic events. But Sea of Thieves has always incorporated a degree of interactivity and exploration, expanding the idea that you are walking through a virtual theme park.

Related: How and where to start Sea of Thieves: A Pirate’s Life

I have a friend who used to work as a “cast member” in Disney World, and even long before the reveal of A Pirate’s Life, they would remark on the feeling of a Disney park in Sea of Thieves, particularly through the Tall Tales. Whether we were solving riddles and avoiding traps in The Art of the Trickster, or looking at constellations and jumping from island to island in Stars of a Thief, these Tall Tales, to my friend, were reminiscent of running around Disney World on a hot Orlando day.

Take Sorcerers of the Magic Kingdom, a mainstay of Disney World that the park only recently removed. Screens representing magic portals were hidden throughout Adventureland, and upon activating them with cards that you receive, you would be presented with a scenario where you must use your cards to cast spells and defeat classic Disney villains. These portals would be disguised behind windows, within gift shops, or in fireplaces, areas you would pass by and not think of, but these are actually hot spots for storytelling with familiar characters. After beating a portal, you would be told where in the park to go next. Similarly, the open world of Sea of Thieves has a number of seemingly innocuous setpieces, only to be the center of Tall Tales that explore deeper lore behind the game’s NPCs, and they task you to explore parts of the world you otherwise may never visit.

That’s the core of a Disney park experience, making you feel active in an otherwise linear experience, and on the way, the story provides you with lore, details, and other fun character moments through interactive puzzles. Music cues and other happenings in Disney parks are also very analogous to how Sea of Thieves presents both its Tall Tales and dynamic world events, such as when a Megalodon or Skeleton Ship emerges to attack you. And as my friend points out, some Disney park regulars are happy to help strangers understand the mechanics of something like Sorcerers of the Magic Kingdom, or direct them whenever they’re lost — during the best and wholesome moments of Sea of Thieves, other random players might help you in the same way.

Sea of Thieves: A Pirate’s Life really is a labor of love with meticulous detail, especially in the first and third Tall Tales of the expansion. Ghost pirate NPCs would stand in for the ride animatronics, and audio ripped directly from the Pirates of the Caribbean ride would blare, most notably the haunting “dead men tell no tales” soundbite. The second and fourth Tall Tales felt like proper theme park rides where you wait in line — and like in real life, these story missions would sometimes malfunction and fail to reset. But Captains of the Damned, the third Tall Tale, is where more blatant recreations of the theme park ride came into the forefront.

The town of Isla Tesoro is just one theme park ride reference after another, with full virtual reenactments of Barbossa attacking the fort, Carlos dunked into a well while his wife yells to “don’t be chicken,” and the famous auction scene by the Mercado. But while my ex-Disney cast member friend reveled in all of this, the moment provoked tears of emotion and nostalgia was actually at a much smaller reference. While going off the beaten path to explore the town, they found a skeleton sitting on a bridge, resembling what they called the “hairy leg” animatronic.

That “hairy leg funny guy” is an element that has “survived oral tradition” amongst both Disney cast members and very frequent visitors of the ride as a distinct part of the ride locked in their memories. It was a small detail that signaled that some Rare developers have been on the ride — a lot. My friend spent most of their time in that Tall Tale exploring, like a ride passenger going off the rails, finding details like another animatronic reference to a pirate with a seagull on its hat using the same audio from the ride, or closely examining each item from the Mercado auction. Everything had a Sea of Thieves flavor and aesthetic, yet it was all still very recognizable.

Even for myself, someone who certainly hasn’t been to Disney World as many times as some hardcore fans, there was still a lot for me to latch onto as someone who finds the Pirates of the Caribbean film series as a guilty pleasure. Sure, Jack Sparrow is a pretty annoying character in 2021, but I constantly held my breath waiting for him to say “bring me that horizon.” The Tall Tales fit in comfortably with the mythology of the films, recreating iconic scenes and dropping memorable lines and music cues from the first three movies in particular, like “Hoist the Colors” and the use of Davy Jones’s motif. Even the chilling mermaid theme from the often-forgotten fourth movie provided a cinematic highlight.

There’s something for all Pirates of the Caribbean enthusiasts in Sea of Thieves: A Pirate’s Life, whether you still love the theme park ride to this day or used to enjoy one or several of the movies. And with some easter eggs to the Monkey Island game series, fans are imagining future crossovers with other Disney properties Muppet Treasure Island and Treasure Planet. But ultimately, it’s that theme park connection that makes Sea of Thieves so strong and heartfelt. Thematically, A Pirate’s Life is all about freedom, and this Sea of Thieves expansion gives the player the freedom to wander and absorb a virtual theme park at their own pace.