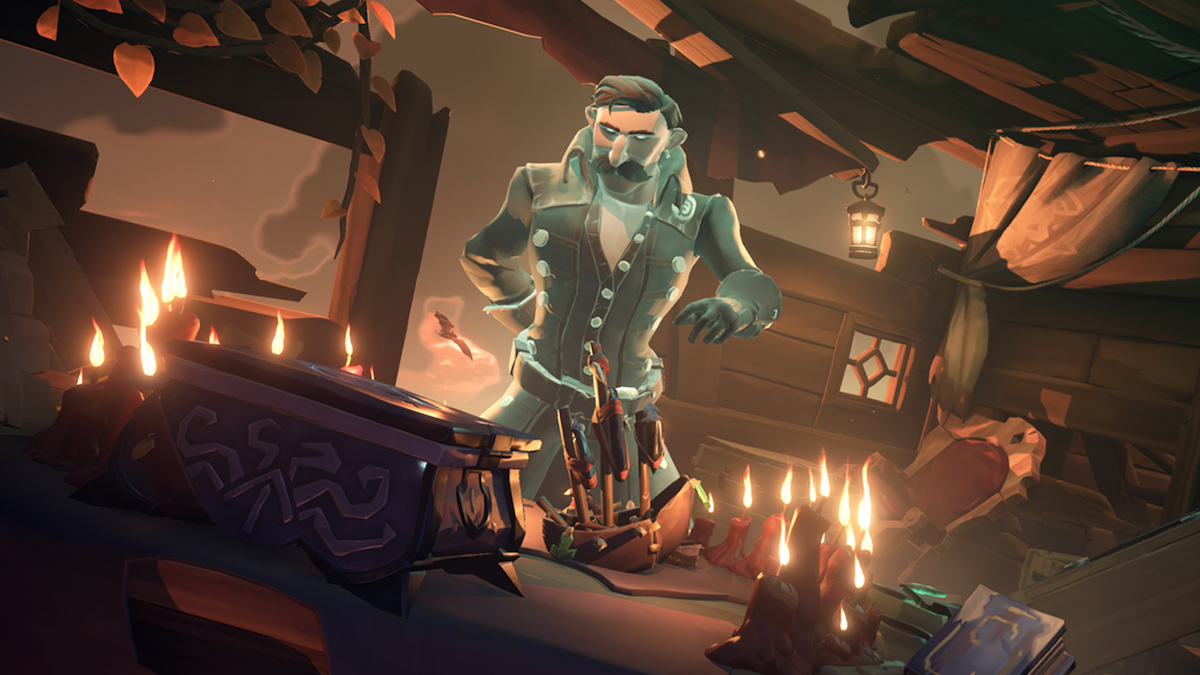 Sir Arthur Pendragon is a legendary figure in the world of Sea of Thieves, and the Tall Tale named The Seabound Soul will take you on an adventure with his ghost. After beginning this Tall Tale on Shipwreck Bay, with the quest’s starting point being on Pendragon’s ship The Blackwyche, you will have five journals to find. These journals tell the stories of the Ashen Dragon and Captains Martha Jane and Randal Stone, whose souls you will be releasing over the course of this quest.

The first journal is the easiest to find — after voting on the Tall Tale and starting it up, simply turn around from the quest book. In the corner is a chair and a box, and on top of that box is the first journal.

The Mourning journal actually points you in the direction of the next journal — the Ashen Dragon ship was sailing to Shiver Retreat. This island is east of Shipwreck Bay and past The Crooked Masts. On Shiver Retreat, look for two barrels under some large rocks, and you’ll find a journal with a red gem leaning against a lantern.

As you read in the previous journal, the Ashen Dragon’s course will have it sail by Liar’s Backbone, your next destination for the third journal. This island is conveniently just to your east from Shiver Retreat — upon making landfall, go up the hill on the west side of the island. There will be a tree, distinct from all of the palm trees on the island, and on the other side, lying on the ground against the trunk, is the next journal.

Keep following the trail that the journal text is pointing you towards. According to the third journal, the Ashen Dragon stopped at Scorched Pass for repairs. You will keep bearing east, but sail a farther distance into The Devil’s Roar. Once there, head to the southeast and look for some crooked trees, large rocks, and magma crystals; on the grass below the tree is a journal.

Your final stop will be at Flintlock Peninsula, still located in The Devil’s Roar and directly south of Scorched Pass. This is a large and dangerous island, with geysers and enemy mobs as potential sources of damage. Go north of the volcano that is in the center of the island, and lodged between two large rocks are two barrels, a small fire, and a stepping stool that the journal lies on. If you have a hard time finding this area, look for the burning beacon; then, turn around and look for the barrels between the rocks.