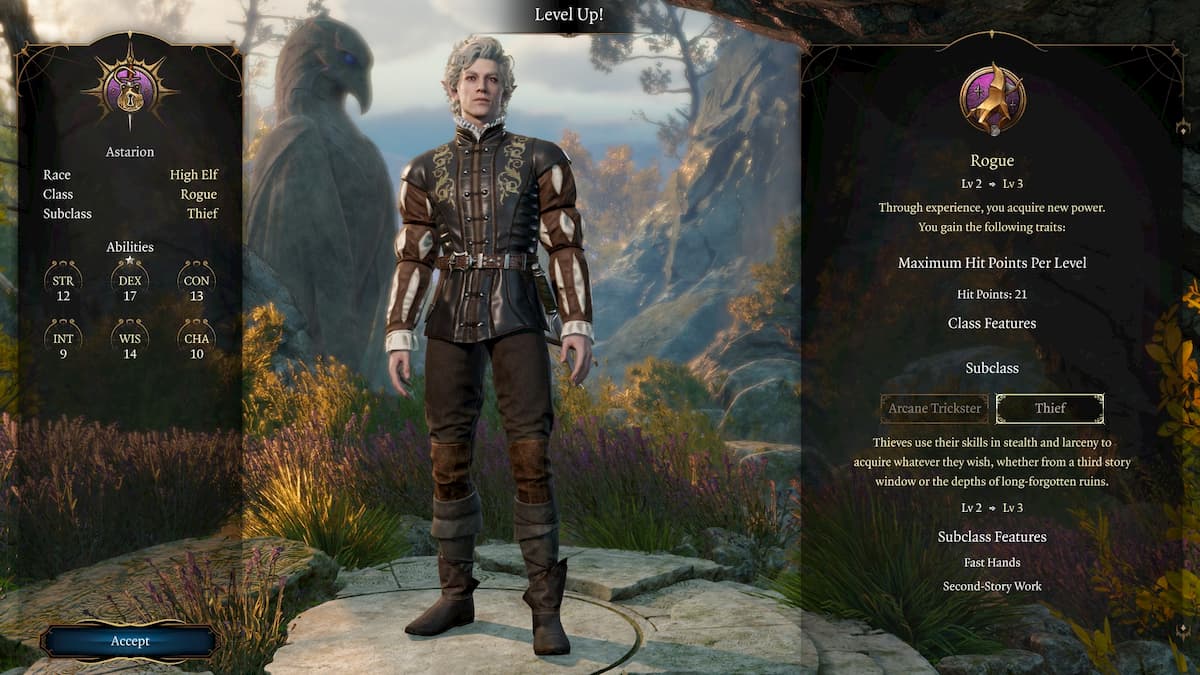 When your characters reach level three in Baldur’s Gate 3, they have the chance to gain a few more skills for their particular archetype. Do you want your rogue to become an expert thief, or can they dabble in arcane magic to make their stealth and attacks far more brutal? Maybe your wizard prefers to rely on elemental magic? Even your cleric can choose to go down the road of becoming a healer, or you might prefer them to learn more aggressive spells.

The choice is yours, but each of them becomes something different once they turn level three, although, some of the more magical heavy classes, such as the warlock and wizard, have you choose your subclass much earlier.

The life domain for the cleric focuses on making them a better healer. Those who choose to go down the life domain gain the disciple of life feature. It means that whenever the cleric heals someone, they give two plus whatever level of healing spell they are casting on the person. Basically, you want to be a tank who heals, the life domain is the best choice. A life domain cleric can also wear heavy armor.

The light cleric is the more attack and aggressive fighter of the three choices. The life cleric can use the spells burning hands and faerie fire, and the light cantrip at level one. They also have the subclass feature called warding flare that shields them in divine light, allowing them, as a reaction, to impose disadvantage against a fighter, making it harder for their foes to hit them. A light cleric becomes an expert in fighting evil and undead creatures as they level up.

The final choice is the trickery domain. While the cleric is supposed to be full of justice, a trickery domain cleric is more about causing mayhem and mischief on the battlefield, potentially distracting opponents and causing havoc. At the first level, the trickery cleric gains the spells charm person and disguise self, and they also know how to cast blessing of trickster as a cantrip at level one. For those who want a sneakier party, a trickery domain cleric can help make sure party members make their hiding and stealth roles, potentially being a more illusions-based support character.

All of the cleric’s domains know how to cast bless and cure wounds at level one.

The fighter is an expert in melee and ranged combat, and the battle master subclass doubles down on this idea. You choose three from four different passives that aid you in combat. The first is a menacing attack, which allows you to deal a 1d8 of slashing damage against a foe on a successful hit, frightening an opponent. The next is pushing attack, where you roll a 1d8 of slashing damage to potentially push the enemy back. The third option is rally, granting you the ability to bolster a friendly target and give them eight additional hit points. The final option is riposte, where when an enemy’s melee attack misses you, you can retaliate with a 1d6+2+1d8 of bludgeoning damage against them. Each of these abilities requires a superiority dice to use, and you have four at level three.

The alternative is Eldritch Knight, which turns the fighter into a magical combatant. They can choose from a range of cantrips and level one spells. These spells vary in power and depending on which ones you prefer, you can further customize your fighter. They still remain a powerful combatant, but now they have the power of magic added to their arsenal.

Both choices gain the level one transmutation spell jump, allowing them to leap three times their traditional distance.

A ranger who chooses the hunter subclass becomes a monster of a focused DPS character. They get to choose from a different kind of prey and gain and advantage against them. They can be a colossus slayer where once per turn of combat, they gain an extra 1d8 when dealing damage to an enemy below its maximum health. The other choice is giant killer where they gain a reaction against doing a melee attack against any foe designated as a “large” creature or bigger than them. The final choice is horde breaker, where they can target two creatures standing close to one another and attack them in quick succession.

The alternative is to become a beastmaster. A beastmaster ranger gains the ability to summon a pet to their side and use it as a familiar. A familiar is weaker than at traditional character and does not have as many stats or abilities, but they can be beneficial in various situations. You can choose to summon a bear, raven, boar, spider, or a wolf to your side. Each one specializes in a specific situation, such as the boar being able to rush through an area to knock down enemies, whereas the wolf is stealthy and can knock an enemy prone.

The rogue is a nasty class to play, capable of leaping from the shadows to deal massive amounts of damage. As an arcane trickster, you gain the ability to learn a variety of spells that can further enhance your stealth, hiding, and distraction capabilities. You learn two cantrips of your choosing, gain two level one spell slots and get to choose those spells, and you gain the Mage Hand Legerdemain, giving you additional options when you spawn a mage hand, and it can become invisible.

For those who prefer to stick to the basics and straightforward nature of a rogue, the thief’s route is a superb one to take. You gain the feature fast hands, granting you the capacity to perform an additional bonus action. The subclass also comes with the feature Second-story work, giving you resistance to falling damage. As you level up, you gain other skills to being a thief and become a master of stealth.

Warlock – The Fiend or The Great One

The warlock has made a deal with a powerful entity to gain the use of its demonic magic. Deals like this never go well, but the warlock has made their choice. The Fiend choice provides the warlock magic-user with more demonic and harmful blessings. The main appeal of this subclass, when you first start it, is that whenever you reduce a character’s health to zero you gain the Dark One’s Blessing, which gives you your Charisma modify plus your level hit points, giving you temporary hitpoints. Mostly, your goal is to fight and kill plenty of weaker enemies.

The other choice is to go with The Great One. At level one, you do not have any subclass features but gain access to new spells. The first two, dissonant whispers and tasha’s hideous laughter, are available in character creation at level one. Because of how powerful they are at this level, it’s useful to grab these, and then choose the others your eldritch being provides you with from the Far Realms world. Primarily, this choice is about debuffing enemies, causing destructive chaos on the battlefield, and helping your allies gain control of a situation. Eventually, you can even control enemies to heed your commands.

The wizard of the abjuration school spends most of their time attempting to ward off foes and protect their allies. You gain the subclass feature called arcane ward. Once per day whenever you cast an abjuration spell, you gain a magical ward around you that lasts until your next long rest. The ward has three hit points, and absorbs all damage you won’t take, until it breaks. When it breaks, you take whatever damage is leftover from the attack that broke the spell. However, ward remains intact, and the magic remains on you. Whenever you cast an abjuration spell, the ward returns and gains hitpoints based on twice the level of the abjuration spell you performed. You can use this spell on other party members, protecting them.

Alternatively, you can focus on more elemental damage and attacks as a wizard with the evocation school. It’s a more aggressive choice where your subclass feature enables it so your party members can safely walk across and pass through elemental effects that your magic created, such as creating a small fire or a small area of ice. Your party members and allies will also successfully make their saving throws when walking through these areas, and take no damage from these spells.