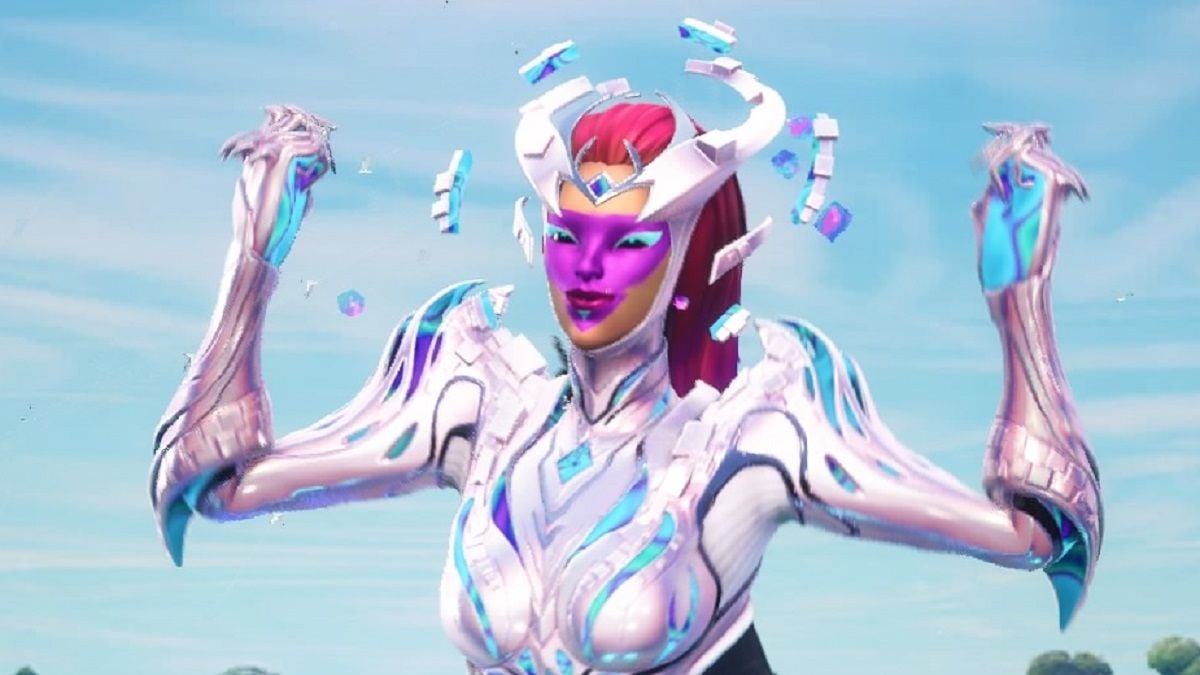 Fortnite is home to many aliens across the galaxy. From those dwelling from somewhere far, far away to the hollow dredges of Xenomorph Prime, this battle royale has a lot of extraterrestrial characters to play as. These are the best Fortnite Alien Skins that are extraterrestrial and extraordinary as of this writing.

Unlocked as one of the last outfits in Chapter 2 Season 8, The Cube Queen has an incredible dominating look that leaves players in fear. Parts of her floating above her head are gathering cube energy while it seeps out of her around the skirt. It’s a striking design that was the main protagonist of one of Fortnite’s best seasons. Her Obliterator style, if you were able to unlock it, looks even meaner with a black outline and piercing yellow eyes.

Representing the Guardians of the Galaxy comes Gamora, Thanos’ daughter. She comes with a stunning sword and cape that go nicely with her white outfit. While her look is based on the comics, Gamora is still kicking ass in the world of Fortnite. She’s been available on the Fortnite Item Shop multiple times, the last being on December 29, 2021, for 1,500 V-Bucks. She first came out during Chapter 2 Season 7, and as the Guardians of the Galaxy is a popular Marvel brand, we’ll likely see her come back when promotion for the third MCU movie ramps up.

Available exclusively for Fortnite Crew members in December 2020, Galaxia provides a fun galactic skin for players to play. Almost her entire body is covered in stars, and she is styling with some rocking sunglasses and colorful hair. We also love her blue feet and shins that shine energy. She’ll unlikely ever be on Item Shop as Galaxia was only available to access in December 2020. The Empress of the Cosmos hasn’t appeared in the shop once since her debut. Galaxia is also one of the best girl skins in Fortnite.

Gumbo is one of the unique outfits in Fortnite, and that’s saying a lot. This alien takes on the form of a bubblegum dispenser. Available through the Chapter 3 Season 1 battle pass, Gumbo has a unique hammer as a harvesting tool with a gum monster hanging out of it, a weird gummy sack with little candies trying to escape, and even his own theme music. As he’s presented alongside an evil laugh emote and quite a ghastly-looking loading screen called Munchy Mayhem, he’s presented as a bad guy. He is, however, one of the coolest designs from that season of Fortnite.

When you think of Star Wars, an imperial stormtrooper is likely associated with it. The iconic design is perfectly replicated within this battle royale. This character was first introduced in Chapter 2 Season 1 for 1,500 V-Bucks, but you could have also got them by purchasing Star Wars Jedi: Fallen Order on the Epic Games Store. The Stormtrooper fits in well into the Fortnite universe as we’ve already seen these soldiers dancing in fan conventions and viral videos before. The Stormtrooper has been available for three Decembers now, so we expect them to be available again that time this year.

Another popular Star Wars character, The Mandolorian, makes the list as he’s one of the coolest characters to step foot into Fortnite. With his rugged design and cool cape, it’s hard not to feel like a badass in this battle royale with The Mandolorian. If you were able to level up to 100 during Chapter 2 Season 5’s battle pass, you could have received the full Baskar armor and a flying Grogu (Baby Yoda) as a backpack. If you’re a big fan of the Disney+ show, a miniature Razer Crest will delight you as a glider.

The Spire Assassin loomed over Chapter 2 Season 6, and is one of the coolest alien designs in Fortnite. The blue heart-like portal inside the prickly armor. The bird-like claws, the shining helmet, and the awesome shoulder pads all make for a domineering presence. She was given to players who hit Level 100 on that season’s battle pass. There were also different colors for this skin like Chromium, Runic, and Golden, who played the game’s season further.

Hailing from Krypton, Superman came bustling down to Fortnite in Chapter 2: Season 7’s battle pass. However, he wasn’t a part of the main bundle. Instead, you had to complete missions while having the battle pass to unlock Clark Kent himself. Once you’ve completed the quests that Epic Games gave you, like using a phone booth as Clark, you would unlock Superman. After that, if you finished 84 epic quests from that season, you would get the dark versions of Superman and Clark that were black and white instead of red, white, and yellow. Superman is a classic character within pop culture, and with his iconic suit, we are glad to see him in Fortnite. We doubt he’d ever carry a gun, though.

The Mad Titan himself, Thanos, entered Fortnite when the Infinity Gauntlet limited-time game mode was ushered in. Players who grab the monstrous weapon would turn into Thanos himself, causing destruction around them and getting targeted by others. This was in May 2018, when Marvel’s Avengers: Infinity War was released in theatres. However, Thanos returned as a playable character in the summer of 2021 in the item shop for 1,500 VBucks. You also could have won him by ranking high during the Thanos Cup. His last appearance in the shop was on December 28 alongside other Marvel characters. Thanos seems cool to play as he shows a dominating presence on screen, and his outfit is beautifully recreated for Fortnite.

If we’re talking about aliens in Fortnite, you can’t forget the Xenomorph. This horrifying creature first appeared in the groundbreaking sci-fi movie Alien and is still prevalent in today’s pop culture. While the alien in a party-like atmosphere is strange, we can’t deny seeing it do a Gangnam Style brought a smile to our faces. The design is creepy, but like a Funko Pop, Epic Games was able to fit in its sinister tail and body into Fortnite seamlessly. First introduced in Season 2 Chapter 5, the Xenomorph has appeared a few times; the last as of this writing was November 15, 2021.