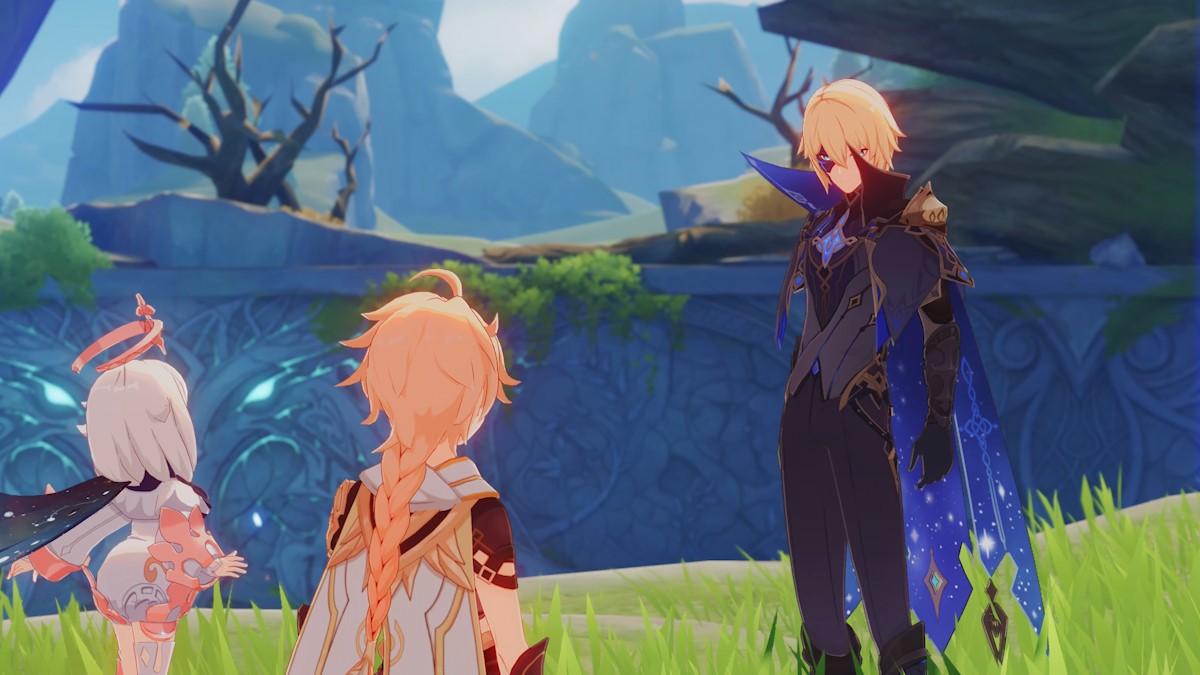 After traveling to Mondstadt just after the release of Genshin Impact 1.3, players will be given a quest by Katheryne of the Adventurer’s Guild. A new wanderer is in town, and Katheryne wants them to join the Guild.

It is up to you to find this mysterious person and see if they will be willing to help out on some adventures.

Upon starting the quest, you will need to go and talk to Lawrence, one of the guards at the main gate. After that, speak with Wagner, the blacksmith in Mondstadt.

After that, you will need to visit Angel’s Share tavern (the one owned by Diluc) and speak with Charles downstairs. He will tell you that the stranger comes in often, and after that head upstairs and sit at the table near the railing to wait.

The Stranger will enter and you can head downstairs and speak with them. Dainsleif will ignore you at first, but will eventually be willing to speak. When you ask him if he will go on adventures with you, he will demand 500 Mora and the chance to ask you three questions. The answers do not seem to impact the game at all, so answer them however you please.

Dainsleif will agree to go on an adventure with you as long as it involves the Abyss, whom he seems to have deep resentment toward. Go to the Temple of the Falcon just outside Mondstadt and speak with Dainsleif, then head inside. A good mix of elements in your party will be worthwhile here, as you will be taking on some mages with shields. Cryo, Hydro, and some Pyro are all worth bringing.

Inside the Domain, you will find some Wolfhook on the ground, but little else, and certainly not the Abyss enemy that Dainsleif hopes for. Dainsleif will suggest head to the Wolfhaven, due to the presence of Wolfhook. Meet him at the checkpoint, then go and examine both locations marked on the map by the yellow rings. Here you will find some bonfires you need to interact with, and some enemies to kill.

Up next is a trip to Stormterror’s Lair. Once again, head to the waypoint and speak with Dainsleif, then teleport to the far side of Stormterror’s Lair and investigate the area in the yellow circle there. Defeat the two waves of enemies that will appear.

When the fight is over the Traveler will get a strange feeling and you will need to investigate the nearby clifftop. Here, you will discover a small plant that reminds the Traveler of his sibling. You will see a flashback of the opening fight from the very start of the game, and the mission will be complete. Dainsleif promises that he will see you again, but for now, your time with this mysterious new character is at an end.