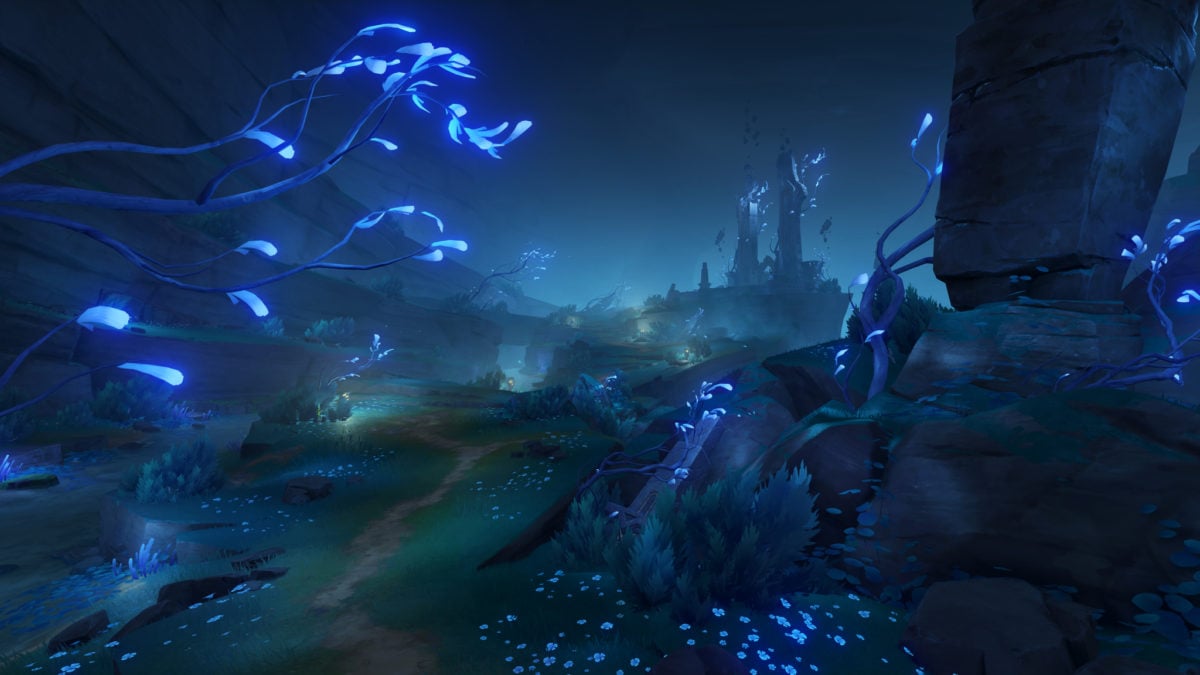 Genshin Impact’s new 2.4 area, Enkanomiya, is a massive new expansion to Inazuma, similar to Dragonspine and Mondstadt. With this new area comes some lengthy and challenging new world quests to complete.

The Subterranean Trials of Drake and Serpent allows you to unlock the new Evernight and Winternight mechanic. You start the quest immediately after the conclusion of “The Entrance to Tokoyo Quest.” In the distance is a large building which you need to head towards, which is about 600m away.

Once you arrive at the building, you’ll receive a tutorial tip about a triangular mechanism you can interact with. Either way, you’ll need to head inside the building and talk to an NPC named Enkou.

Before leaving for the quest, be sure to interact with the topographical map Enkou points you to. This unlocks the map for Enkanomiya, allowing you to better navigate the mysterious environment. (You’ll also unlock an achievement and gain 5 Primogems for doing so, which never hurts.)

The next step is to head to the back of the library. You won’t be able to do so inside the building. Exit it, and climb over the building instead. You’ll come across a stone gate. Head through the gate.

You’ll come across a riddle and some triangular mechanisms. You have to attack these mechanisms from a distance to activate them. You’ll know you’re at the right distance when you see a yellow cube glowing from inside the mechanism. Hit the mechanism, and the wall in front of you will pop out.

Head to the right side and activate that mechanism.

Now, you can head inside the building. The “Golden Bridle” is located in the chest that is now accessible to you. Return to Enkou, and hand over the Golden Bridle. He’ll give you some instructions and go to a building called the Dainichi Mikoshi. Follow the game’s instructions and head to each designated location.

On your way to each location, you’ll come across these blue portals. If you step into them, they’ll automatically transport you a set distance. Don’t be afraid to take them.

Once you finally reach the location, you’ll see a gate blocked by a blue wall. Hand over the Golden Bridle to Enjou and the gate will open.

The next step in this long trek is to head to the Dainichi Mikoshi. Head up to the altar above where Enjou is waiting. You’ll now be able to control the advice pictured below.

Once you activate the device, Enkanomiya will suddenly be swept with darkness. A spirit will appear in front of you, known as Aru or Argos. He’ll explain the next step of the quest.

The last part of this quest is the final trial. A glowing triangular floor will appear in front of you. Activate it to head to the Base of Dainichi Mikoshi.

Now, you’ll have to face your final challenge. A fight between three Bathysmal Vishap. These new enemies can drain your energy if you get hit by them, so avoid them as much as possible.

In a twist, Enjou will appear from out of nowhere. He reveals to have tricked you, and will transform into a brand new type of enemy: An Abyss Lector: Fathomless Flames. Defeat him to proceed.

Finally, this is the conclusion of the long quest. By the end of it, you’ll have gained a little more knowledge about the world of Celestia, and a new enemy in the form of “The Thing Calling Itself ‘Enjou.'” There’s more to explore in Enkanomiya, so this isn’t the end of your adventures there.