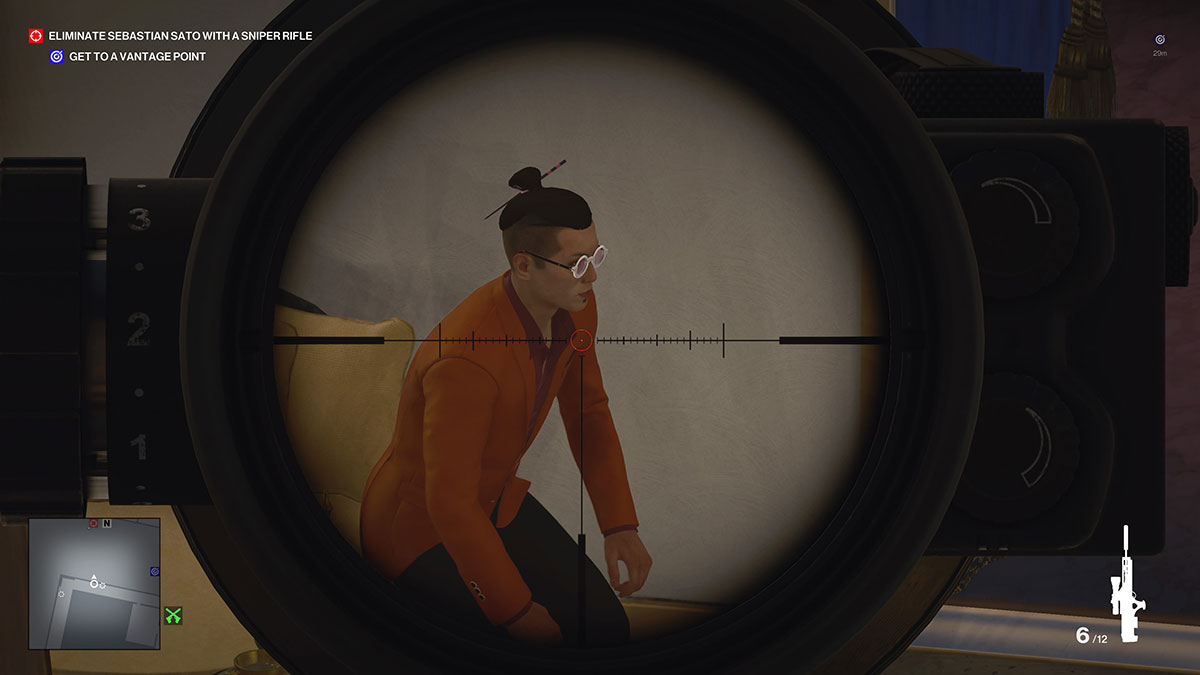 The Sebastian Principle is, in a way, a tutorial Escalation in Hitman 3. It was added with Season of Pride and feels like one of the easiest in the entire Hitman reboot trilogy. However, getting a Silent Assassin rank in any Escalation is far from easy, which is why this guide will show you how to complete all three levels and attain that lofty rank, and therefore the highest score possible.

This Escalation doesn’t give you the option to change up your loadout, unfortunately. You have to jump into each level with whatever you’re given, which isn’t much. However, it will be more than enough if you follow our route.

In this first level, you have a simple target to take down and a single additional requirement. You’ll start in the Black Gold Bar in the Dubai location. Your task is to kill your target, and the optional objective is to pick up the event staff disguise. Oddly, many areas in this location are locked off for each of the three stages of this Escalation. Not to worry, though. First, let’s get that disguise.

Turn around from spawn and head towards the actual bar. Run to the left-hand side of the bar, where there’s an opening. You need to run behind the bar, turn left, and go through the door as quickly as possible. As long as you’re fast, no one will see you.

In the next room, you’ll see an NPC in the disguise you need. Subdue them, and take their disguise. Next to the area where this NPC was standing is some rat poison on the shelves. Pick it up, because we’re going to need it to take out the target.

Now head out of the room the same way you entered. You need to go into the area on the right, past the blue curtains. To do this, you’ll need to get frisked by one of the guards. Do this so that you can proceed.

Run into the area and head to the bar. You need to poison the glass of whisky that’s sitting there. If you’re fast, you should be able to do this before the target drinks it as part of their animation loop. If not, don’t worry. Wait until they’ve moved off so that you can poison it for their next loop.

Follow the target into the bathroom and drown him. You can use the fiber wire if you’d prefer, but by drowning the target, you guarantee a Silent Assassin rank even if the body is found. Once the target is dead, head off and take the exit, the elevator shaft you passed earlier.

For this second level, you need to do things slightly differently. The target must die from an accident. The first thing you need is a security disguise. Luckily the game points one out to you. Head behind the Black Gold Bar once again, but this time go past the NPC you subdued earlier. Follow the prompt to the security disguise in the next room and change into it before any NPCs spot you. There should be plenty of time to do this.

Pick up the iron on the shelves nearby, then head out the door and into the stairwell. You need to run up the stairs and turn left after the elevator door. This leads you to a walkway. On your left is the security room. Head inside and pick up the keycard that’s sitting on the desk.

With keycard in hand, go back out into the corridor and into the room where you passed the elevator. On your left will be a door to the penthouse reception. Use the keycard to get in. At this point, the game will be asking you to destroy the security equipment in the security room. There’s no need to do that, though. Instead, pull out your silenced pistol in this stairwell and shoot the camera ahead of you.

Climb the wood next to this camera and vault up over the railing above. Now you’ll be on the same floor as the target. If you’ve been quick, he’ll be walking around to the left ahead of you. Use your pistol to shoot the wall behind him and grab his attention. You could also flip a coin in the same area to distract him. He will come back if you haven’t caught him at the right time, so don’t panic if you need to wait a little.

As the target comes out to investigate the noise, throw the iron at his head. You can now kill him by dumping his body in the open elevator shaft. Alternatively, you can drag him into the nearby meeting room and dump him over the balcony. Any fall will count as an accidental kill.

Now the target is dead, you can find the exit and leave the mission.

The third level of this Escalation threatens you with additional objectives, but they’re nothing that you can’t handle. You’ll spawn in the same area as before, but you’re tasked with killing your target with a sniper rifle. The first thing that you should do is follow the same path you took in level 2 and pick up the security disguise. Pick up the same iron as you did in level 2, and then leave through the same door into the stairwell. Go back into the security room, take the keycard, and get into the penthouse reception area.

Things change from this point. Shoot the camera out, but now walk up the stairs instead of vaulting over the railing. At the top, there will be a guard who is walking back and forth on the floor above. When he’s moved all the way to the left, take him out with the iron and steal his disguise. You can leave his body where it falls.

Next, turn around and go into the door marked maintenance corridor. There are two janitors in here. Wait until the janitor at the far end of the corridor has turned to walk off to the left. Then, subdue the closer janitor with the iron and take her key. Now you can run over and subdue the second janitor. This is important because he’ll discover the body otherwise.

The sniper rifle is in the closet at the end of this corridor. Use the key you just picked up to get in and grab it.

You’ll be tasked by the game with finding a good vantage point, but if you’ve moved quickly enough, you’re already in one. Run back along the corridor to the second opening with blue curtains, and you should be able to see the target a few floors down. Use instinct if you need to track him better. You can shoot him from here and leave his body where it is.

Below is a map reference for the vantage point we recommend.

All that’s left to do is take the exit. The only available one is the helicopter pad. Run out of this corridor and turn left. As you approach the door to the helicopter pad, you’ll see two guards standing in your way. Flip a coin to their left. As they’re distracted by it, they’ll turn away. Use this opportunity to run past them and get through the door and onto the outer walkway.