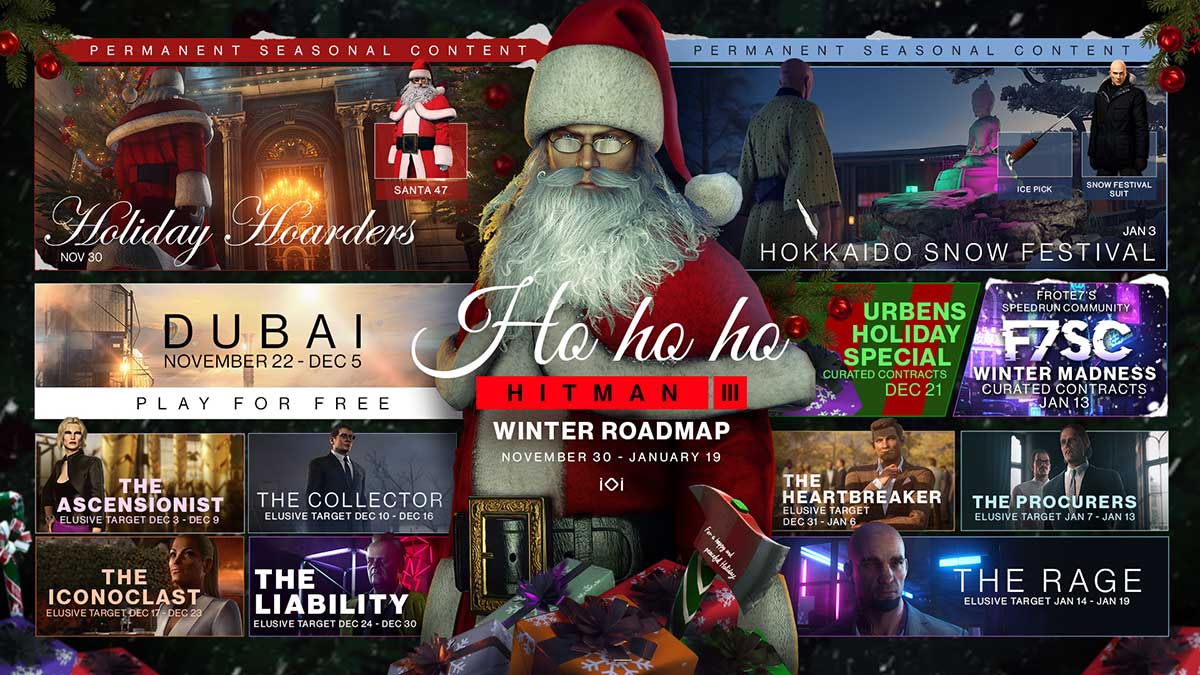 IO Interactive has surprised all Hitman 3 players with a new Winter roadmap. This roadmap reveals all the content coming to the game over the holiday period and into January 2022. There’s a mix of new and old content from past Hitman games to enjoy, filling up the weeks leading into the new year when the developer will officially reveal its plans for Hitman 3 Year Two. The content you can expect to play until then is as follows.

Hitman 3’s Dubai location and mission are free for all Hitman 3 Starter Pack owners for a limited time. This is the location where Hitman 3’s story begins, offering anyone the chance to experience the game’s intro at no cost.

Holiday Hoarders is a permanent mission set in Hitman 2016’s Paris location. The mission debuted in 2016 but will now be made available for free to all owners of Hitman 3. Players must hunt down two targets inspired by the villains from the early Home Alone movies. There’s a new suit to unlock in this mission and plenty of new challenges for players to take on if they’re looking for more content to dig their teeth into.

For a short period of time, players will be able to revisit all the Elusive Targets that appeared in Hitman 3 locations throughout 2021. The targets will be available one after the other in the following order and only available for the dates shown.

The first batch of holiday-themed Featured Contracts comes from a community member named Urben. These Contracts are all focused on Christmas and the theme of giving, meaning they may look quite different from the standard offering.

The Hokkaido Snow Festival is a new permanent event for all Hitman 3 owners. It adds two new items to unlock and provides you with an interesting new mission to work through, similar to Holiday Hoarders.

The second batch of Featured Contracts for the season comes from the Hitman Speedrunning community. These Contracts will still be themed on the holiday season but should feature more of a focus on speed and getting the job done fast.